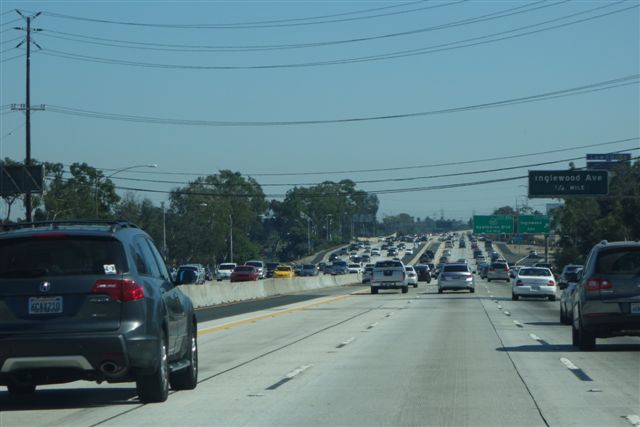 We didn’t rush this morning having decided that we’d have a lazy drive down to Carlsbad and enjoy the coast. The distance from Thousand Oaks to San Diego is 160 miles which would take two and a half hours. It was to be one of our shortest daily drives and we intended to enjoy taking some time out along the way.

But unfortunately the coastal South Californian fog hadn’t cleared by early afternoon and, although we were driving the South Pacific Highway, right on the edge of the ocean, we didn’t see the sea very often, the traffic was very heavy and we decided not to stop. We’d been hoping to picnic on the beach but it wouldn’t have been worth it. 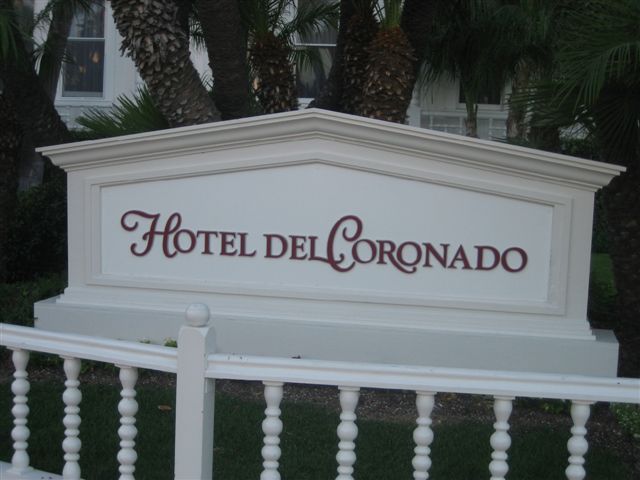 We checked into our hotel and left almost immediately for El Coronado in San Diego, a hotel that Julia had taken me to two years earlier. Once again it was a Hampton Inn and we can recommend it – Hampton Inn, Carlsbad-North, San Diego 2229, Palomar Airport Road, Carlsbad 92011. 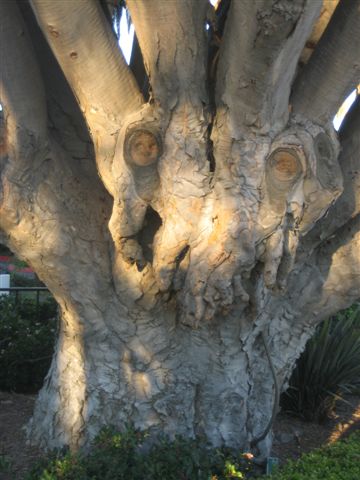 One thing I’d missed on my previous visit to ‘The Del’ was the Dragon Tree which Suzi quickly spotted close to the entrance.

The sign told us that, native to the Canary Islands, this tree was planted at prior to the turn of the century where it thrives in the temperate southern California coastal climate. The dragon tree was used as a backdrop in the Marilyn Monroe movie, ‘Some Like It Hot’, which was filmed at in 1958. It was a bit scary! 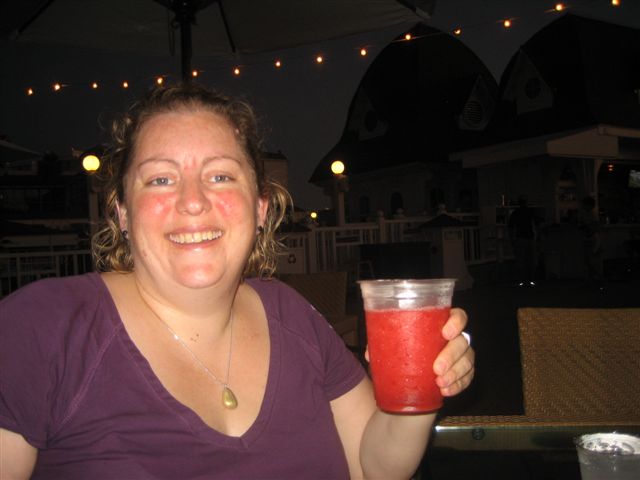 The purpose of coming here with Suzi was to indulge in ‘cocktails at sunset’ and it’s a delightful experience. While we indulged in our cocktails, we could watch the 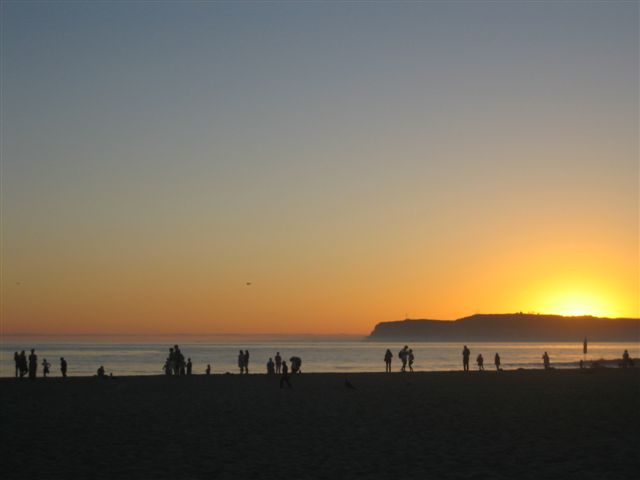 world and his wife enjoying the last rays of the sun in idyllic surroundings.

After a great sleep, we continued to take it easy the next day too! We left our hotel fairly late having enjoyed a quick hour by the pool and had a 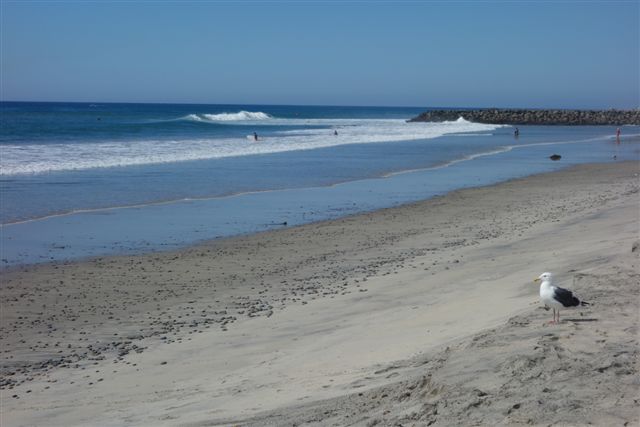 picnic lunch at Carlsbad beach with the ! 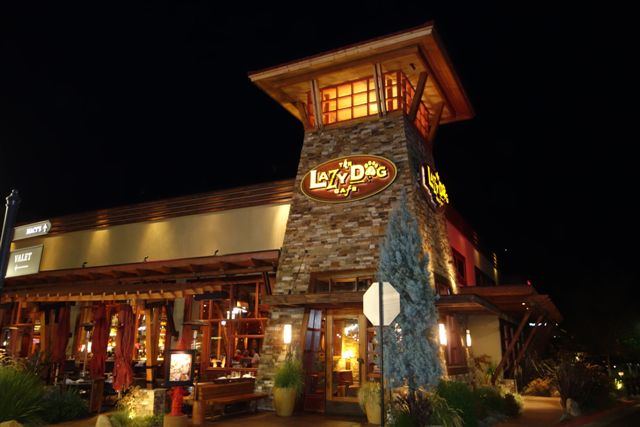 fairly close to the airport for the following evening. We seemed to be doing nothing much more than driving up and down the coast and eating and, on the recommendation of the hotel, we had dinner at the Lazy Dog, a fairly new restaurant close by. 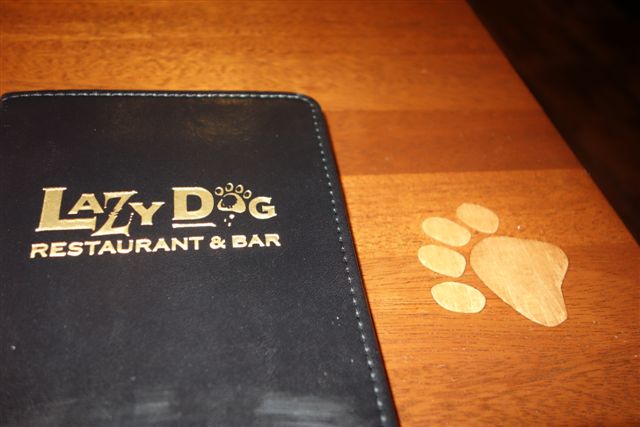 It was fabulous and the little paw marks that appeared here and there were very endearing! 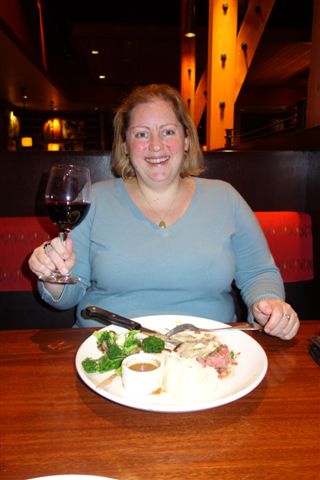 We ate sumptuously of our favourite things – after all, it was our last night. 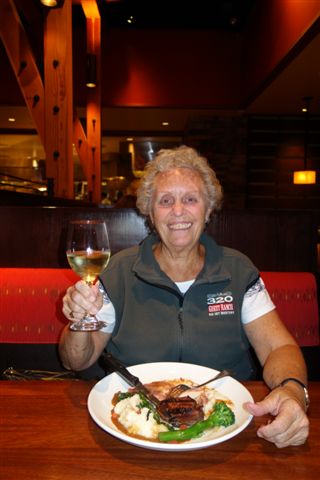 And toasted the success of our travels, absent friends (Julie) and the wonderful things we’d seen. 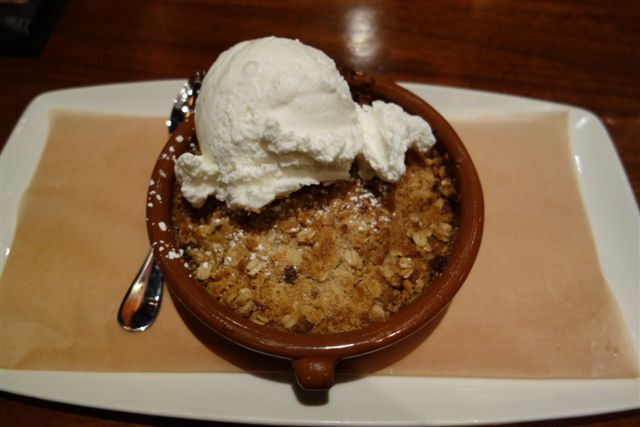 the next day. It was a sinful cinnamon apple crumble and there were wonderful flavours both in the apple and in the crumble!

Suzi asked if the name of the restaurant meant that dogs were welcomed to eat there and was assured that there was a menu for the dogs who were welcome to eat outside on the balcony. And they had quite a wide selection of offerings! 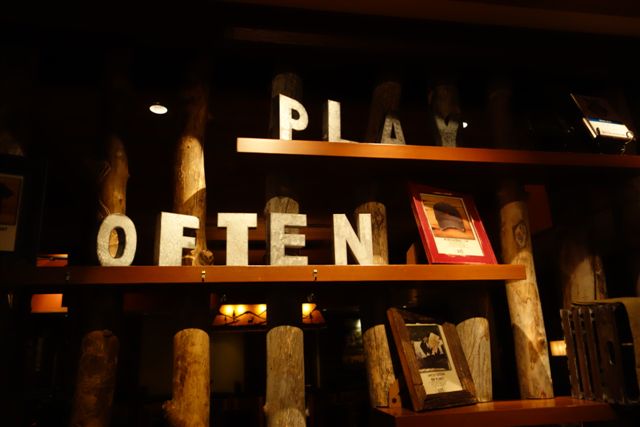 There was a lovely sign over the counter when we went to pay – I didn’t quite catch all the letters in the light but it says ‘play often’! We felt as if we’d been playing hard for the past five weeks and were glad to see the sign in a restaurant.

We agreed that we’d enjoyed our last evening so much that we’d like a small memory of the restaurant, apart from our photos. Suzi asked a nice man (who happened to be the owner!) whether he had a beer coaster he could let us have as a memento. He looked momentarily challenged and then said, ‘I can do better than that’. He took a key from his pocket, opened a cupboard door, rummaged around and brought out two T-shirts for us, one, he explained to commemorate the opening of the Restaurant and the other for a campaign they’d run recently for breast cancer. We were totally overwhelmed, but what an amazing end to a holiday to receive such kindness and generosity. 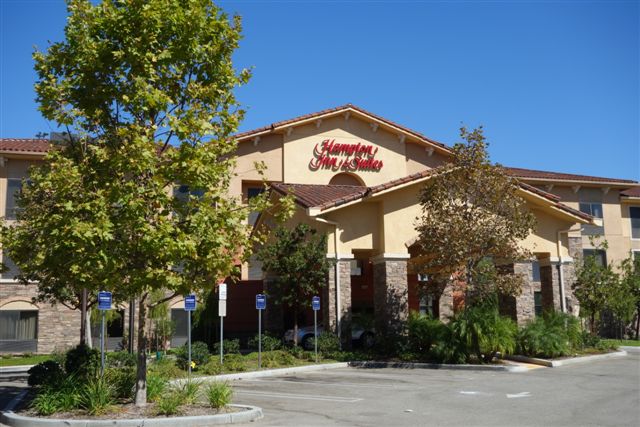 Tuesday morning, 7 October, our last day was the time for some serious packing. Why does it all take so much longer than one expects? Suzi, of course, took longer than I did because she’d been pushing and pulling 7 years’ worth of goodies into her three cases and she’d picked up quite a few mementoes along the way. It was sad to say goodbye to our hotel and the wonderful service we’d received there.

I was very thrilled that I had time to spend an hour by the pool before we set off for Topanga Canyon in the hope of meeting up with Julia. She’s only recently moved to Topanga Canyon and was very keen to show us around. But in the the ‘nightmare’ that she’d described a couple of days earlier which had prevented us from meeting then was still continuing and we only managed to spend a short hour together. We talked very fast and tried to catch up but we had to leave to drive to the airport which was only a short distance away but which took a long time in the appalling traffic.

We were very relieved to hand over the car, get in the bus to be taken to the right terminal, check in, get through security and sink gratefully into our seats on the plane to face the fourteen and a half hour flight to Sydney.