Today we passed through four states, Massachusetts, New Hampshire, Vermont and New York. That sounds like a lot, but we’ve got far ‘bigger’ days ahead! 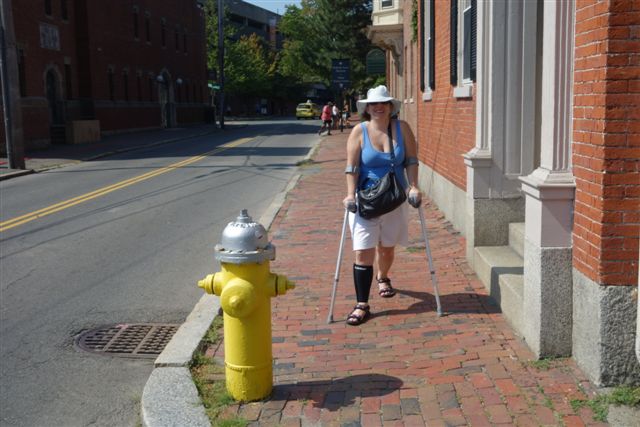 It was an excellent day. Our first drive was to Salem, only 15 miles away. We’d planned a slowish day to take account of ‘hop-a-long’ who was getting better all the time, but was still in pain. In this photo is one of the many American fire hydrants that we seemed to see everywhere - all different sizes, shapes and colours. 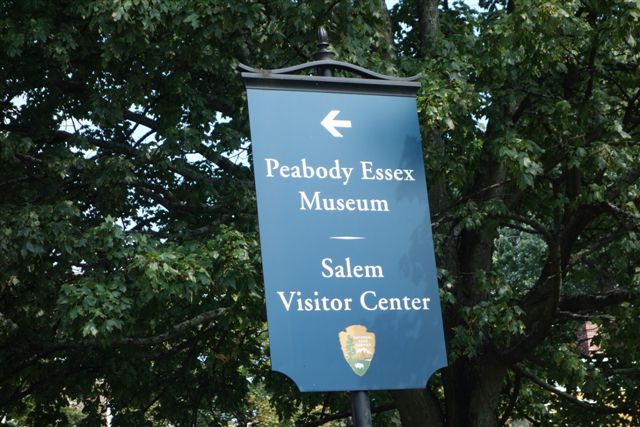 Salem is home to Salem State University, the Salem Willows Park and the Peabody Essex Museum. We had to take a photo of that sign (although we didn’t explore it) because it made us think of the game ‘Cluedo’ that we’ve all played. 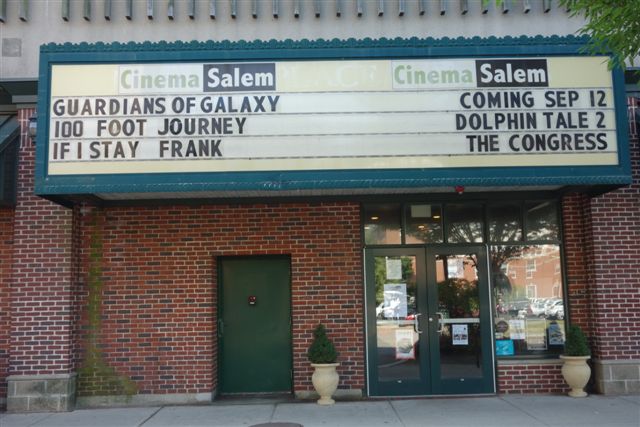 Salem was one of the most significant seaports in early America. It’s now a residential and tourist area which includes the neighbourhoods of Salem Neck, The Point, South Salem and North Salem, Witchcraft Heights, Pickering Wharf, and the McIntire Historic District (named after Salem’s famous architect and carver, Samuel McIntire). The bits we walked through seemed fairly poor – this, for example, was the cinema – showing two movies! 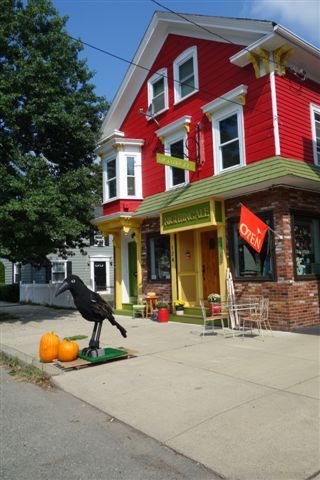 We soon knew we were entering ‘witch’ country when we saw the raven standing over a pumpkin on the ‘sidewalk’!

Featured notably in Arthur Miller’s The Crucible, much of the city’s cultural identity is reflective of its role as the location of the 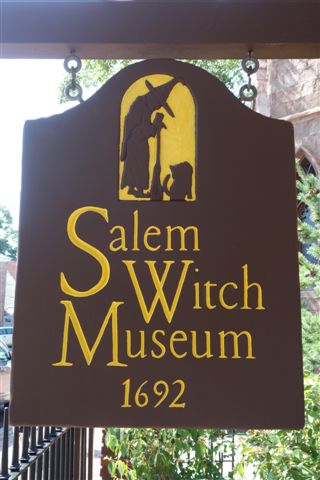 Salem witch trials of 1692. Police cars are adorned with witch logos, a local public school is known as the Witchcraft Heights Elementary School, the Salem High School athletic teams are named the Witches; and Gallows Hill, a site of numerous public hangings, is currently used as a playing field for various sports. Tourists know Salem as a mix of important historical sites, New Age and Wiccan boutiques, kitschy Halloween, witch-themed attractions and a vibrant downtown that has more than 60 restaurants, cafés and coffee shops.

We were excited to be finding out about this time in their history and we weren’t disappointed. The ‘performance’ put on in the Museum was absolutely excellent. The narrated exhibition took place in a very dark room so the photos are understandably on the dark side. 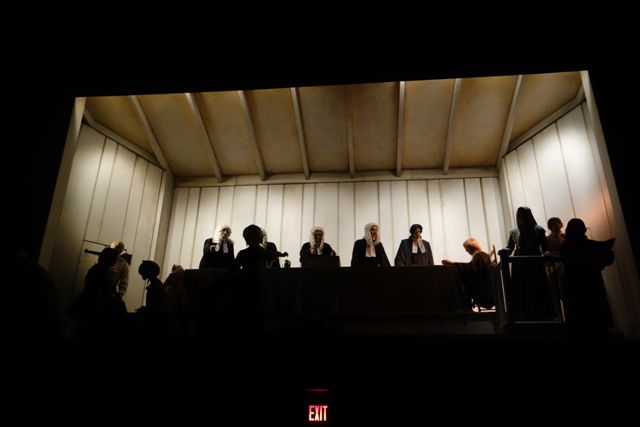 We were taken through the history of the hysteria that occurred in Salem as well as in other parts of the world. Some young woman (it later transpired when she repented after many people had been put to death) had ‘reported’ fellow citizens ‘for fun’. It was tragic how her actions and those of a few others caused so much hysteria and grief. Trials were held and people were either condemned to hang or were kept imprisoned. 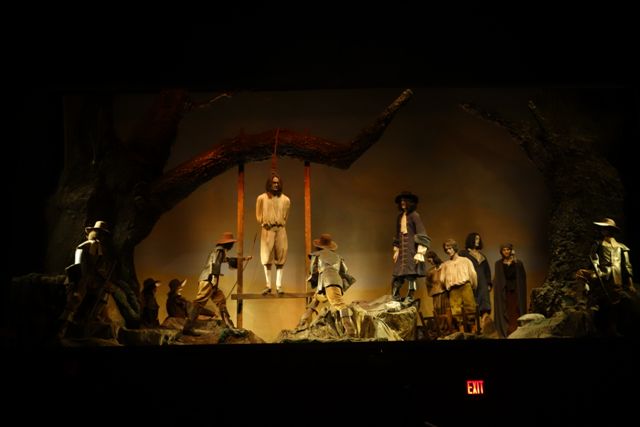 The Salem witch trials were a series of hearings and prosecutions of people accused of witchcraft in colonial Massachusetts between February 1692 and May 1693. The trials resulted in the executions of twenty people, most of them women and at least five more of the accused died in prison.

The episode is one of the nation’s most notorious cases of mass hysteria and has been used in political rhetoric and popular literature as a vivid cautionary tale about the dangers of isolationism, religious extremism, false accusations and lapses in due process. It wasn’t unique but simply an American example of the much broader phenomenon of witch trials in the Early Modern period. Many historians consider the lasting effects of the trials to have been highly influential in subsequent United States history. 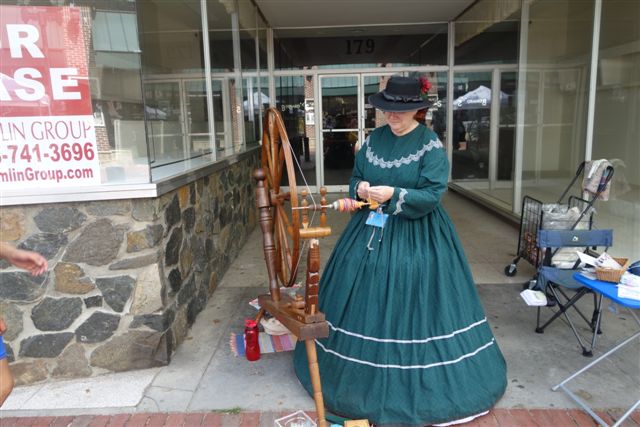 Leaving the Museum (rather reluctantly), we had a quick wander around the town itself and came across some wondrous sights. There 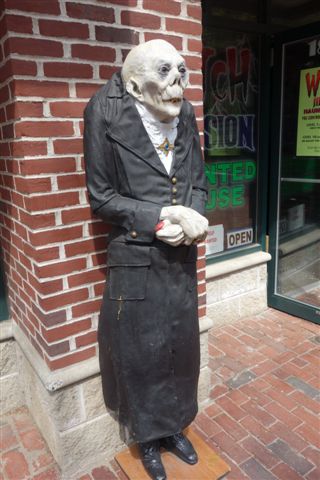 was a woman in full costume of the era, spinning and helping others to learn. And there were quite awful looking characters on the ‘sidewalks’.

A lovely Salem policeman agreed to pose for a photo. 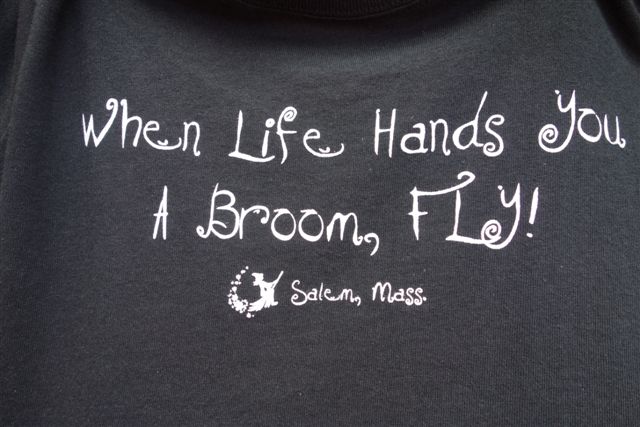 And I particularly enjoyed this sign that I saw on the back of a T-shirt.

We were intending to drive through Concord, New Hampshire without stopping, but were very glad we changed our minds. Given what we’d seen and heard on our tour of Boston, we thought we’d find out more about the Minute Men and the first battles of the American Revolution in 1775. So we drove about 70 miles from Salem and visited the North Bridge Visitor Centre. 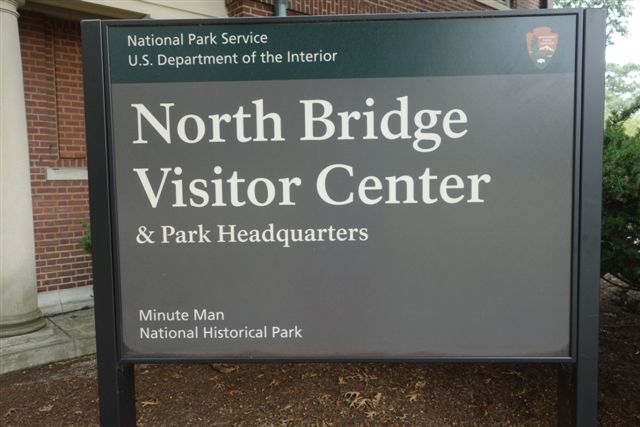 In late 1774 the Suffolk Resolves were to resist the enforcement of the alterations made to the Massachusetts colonial government by the British Parliament following the Boston Tea Party. An illegal Patriot shadow government known as the Massachusetts Provincial Congress was subsequently formed and began to train militia for possible hostilities. The rebel government exercised effective control of the colony outside of British-controlled Boston.

In response, the British government declared Massachusetts to be in a state of rebellion in February 1775. About 700 British Army regulars in Boston were given secret orders to capture and destroy rebel military supplies that were reportedly stored by the Massachusetts militia at Concord. Through effective intelligence gathering, Patriot colonials had received word weeks before the expedition that their supplies might be at risk and had moved most of them to other locations. They also received details about British plans on the night before the battle and were able to rapidly notify the area militias of the enemy movement.

Everyone has probably heard of the fictionalized story of Paul Revere. In the poem, Revere tells a friend to prepare signal lanterns in the Old North Church to let him know whether the British intend to attack by land or sea. He would wait for the signal on the other side of the river in Charlestown and be ready to spread the alarm throughout Middlesex County. The unnamed friend climbs up the steeple and soon sets up two signal lanterns, informing Revere that the British are coming by sea. Revere rides his horse through Medford, Lexington and Concord to warn the patriots.

The ensuing battles marked the outbreak of open armed conflict between the Kingdom of Great Britain and thirteen of its colonies on the mainland of British America.

The first shots were fired just as the sun was rising at Lexington. The militia were outnumbered and fell back, and the regulars proceeded on to Concord, where they searched for the supplies. At the North Bridge in Concord, approximately 500 militiamen fought and defeated three companies of the King’s troops. The outnumbered regulars fell back from the Minutemen after a pitched battle in open territory. The British were forced back to their stronghold on Bunker Hill in Boston which we had heard about the day before.

More militiamen arrived soon afterwards and inflicted heavy damage on the regulars as they marched back towards Boston. Upon returning to Lexington, the King’s expedition was rescued by reinforcements. The combined force, now of about 1,700 men, marched back to Boston under heavy fire in a tactical withdrawal and eventually reached the safety of Charlestown. The accumulated militias blockaded the narrow land accesses to Charlestown and Boston, starting the Siege of Boston.

Concord is a Colonial town of 17,000 people which has a rich cultural and political history. It is the location of the ‘shot heard round the world’. Local farmers, called Minutemen for their ability to be ready for battle in a minute’s notice, fought with British soldiers here on April 19, 1775. It was also ground zero for the philosophical and literary movement known as “transcendentalism.” Writers Ralph Waldo Emerson, Louisa May Alcott and Henry David Thoreau wrote some of their most famous works here and Amos Bronson Alcott established his school of philosophy. 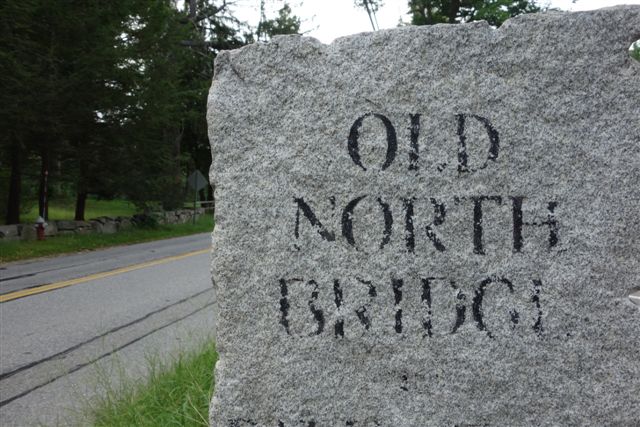 The Minute Man National Historical Park comprises the thin stretch of land along Battle Road between Concord and Lexington. There are four main sites, but we only visited the North Bridge where the Colonials first engaged the British in battle and the Old North Bridge Visitor Centre 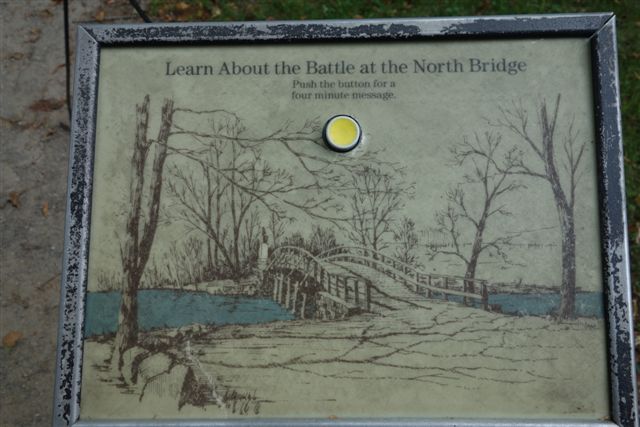 with artefacts, weaponry, uniforms and an excellent historical film. We left the other Visitor Centre with lifelike films and multimedia presentations and the Wayside, home of Nathaniel Hawthorne, Louisa May Alcott and Margaret Sidney for another day.

It’s possible to listen to the story beside the bridge. The original bridge has been replaced several times and may once have looked like the one in the picture. 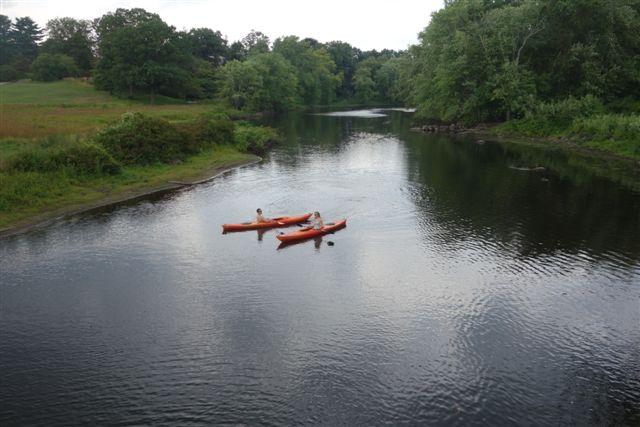 To all intents and purposes the environment around Old North Bridge today is calm and tranquil. People can enjoy the calm waters of the river as if nothing had ever 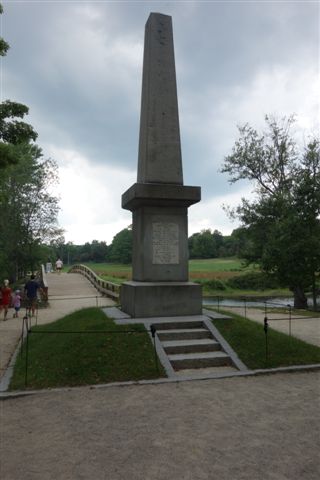 This area is the location of the first battle and this monument has been erected with the following inscription:

HERE, on the 19 of April 1775
Was made
The first forcible resistance
To British aggression
On the opposite Bank
Stood the American Militia
Here stood the Invading Army
And on this spot
The first of the Enemy fell
In the War of that Revolution
Which gave
Independence
To these United States
In gratitude to GOD
And
In the love of Freedom
This Monument
Was erected
AD 1836 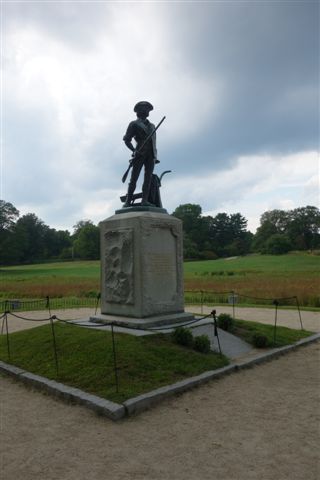 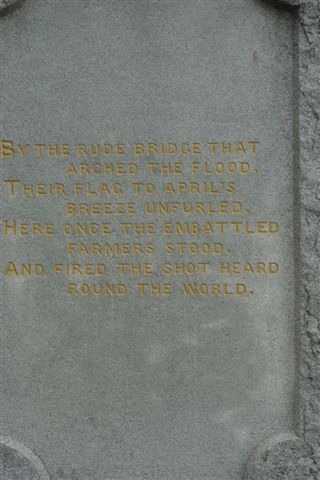 The famous Minute Man statue by Daniel Chester Webster is located across the street from the bridge.

It contains a stanza from the Concord Hymn and reads: 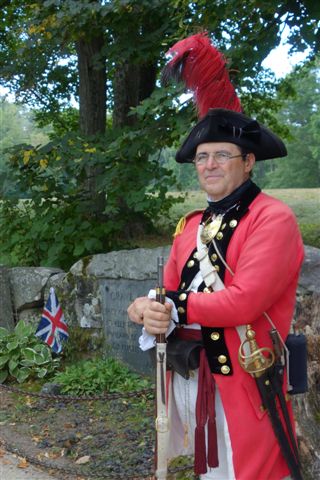 This re-enacted British soldier was guarding the grave of the first two soldiers who fell. I asked him why there wasn’t a re-enacted Militia man to keep him company and he told me that they didn’t usually come out if 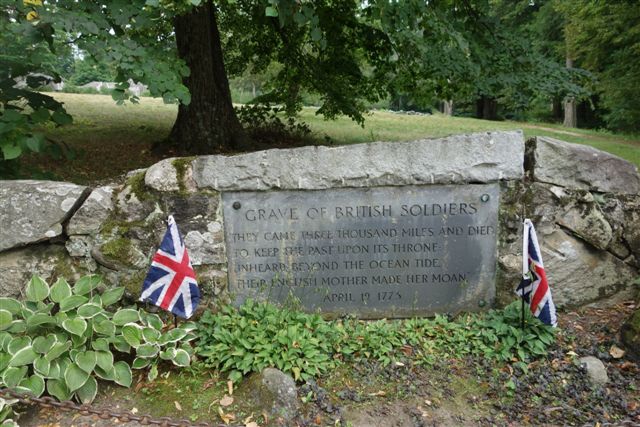 they saw a British soldier there!

There were actually three soldiers who fell in the first skirmish but the third one fell in the field beyond this grave and he was buried in Lexington. The inscription on the grave reads,

Once again we had to tear ourselves away from such an interesting place. The history was fascinating and the site was well worth a visit.

When Suzi and I were planning, we’d estimated the direct distance between Salem and Lake Placid at just over 300 miles which would take us under 6 hours. But we’d forgotten that Suzi wanted us to drive over the Kancamagus Pass (‘Kanc’) from east to west across the White Mountains which meant driving north-east for some distance in order to reach Conway at the eastern end of the pass, a distance of 80 miles north-east when our next destination was, in fact, north-west! As we’d already gone 70 miles out of our way from Salem to Concord, this was going to turn out to be a very, very long day! And when we finally reached Conway and I put our final destination into the GPS it was a bit of a shock to find that we had another 200 miles to drive – about another four and a half hours! 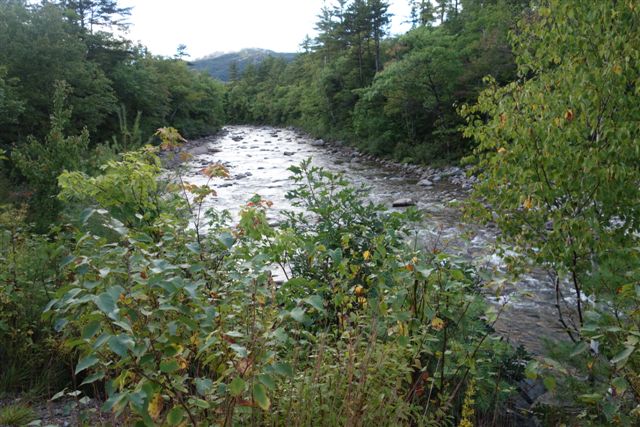 Another of our intentions had been to drive from Salem through New Hampshire and Vermont to get the lovely fall colours of the White Mountains. The Kanc is one of few roads crossing the spine of the White Mountains and is among the states most thrilling drives. The scenes along the side of the road were certainly spectacular. 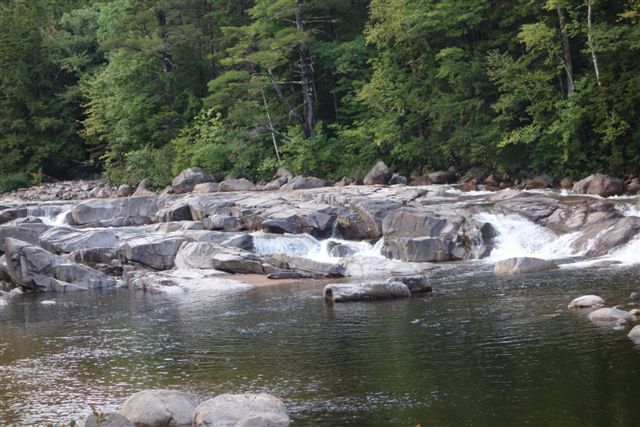 The Kancamagus Pass – New Hampshire Route 112 – is a 56.39-mile-long east–west state highway. The highway winds across the state, via the scenic and mountainous area of the White Mountain National Forest.

We knew that this highway is known for its views of autumn foliage and is a popular drive in September and October for so-called ‘leaf peeping tourism’. We didn’t, however, see much evidence of the Fall at this stage of our trip and people we asked said that we were about two weeks too early. We hoped we’d catch the colours as we drove further north and west. 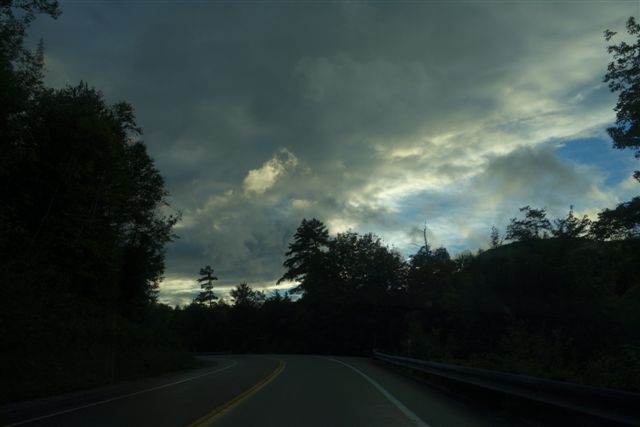 With several hours of driving still to go, we watched the sky darken and realised that we’d only just make the end of the Pass before night fell.

Suzi insisted on driving the whole way and did extremely well. Julie and I kept trying not to drop off because she needed a navigator. We were all very glad when we arrived at our destination just before midnight! We’d rung ahead and were very grateful that someone had waited up for us