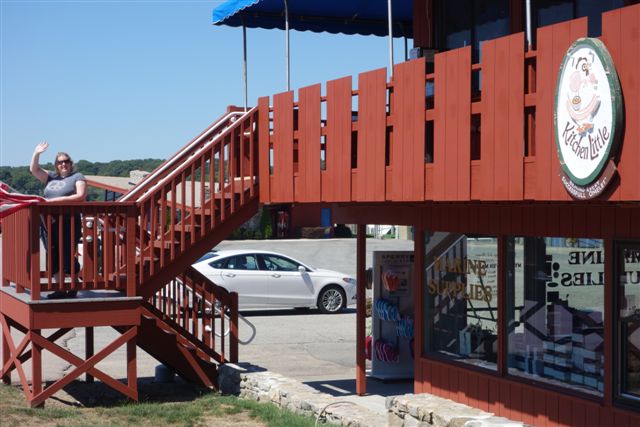 The receptionist was unfailingly helpful and recommended a wonderful café where we could have breakfast. So we drove on smaller and smaller roads to Kitchen Little, a wonderful café at Mystic River Marina. The staff couldn’t do enough for us and we were able to order any combination of breakfast we wanted (rather than the American way of mixing eggs with maple syrup which neither of us likes!). 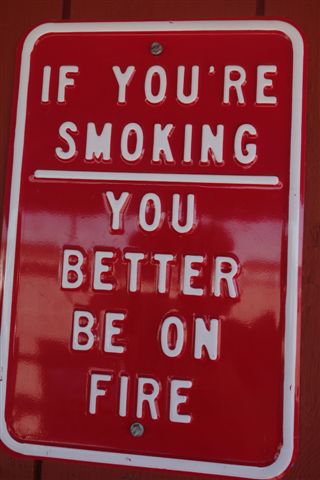 We loved this sign on the wall and thought it would be a good idea on walls all over the place!

The setting was divine and we were surrounded by sea on three sides. It was very hot again but there was a lovely in-shore breeze blowing. We could have stayed there for some time. 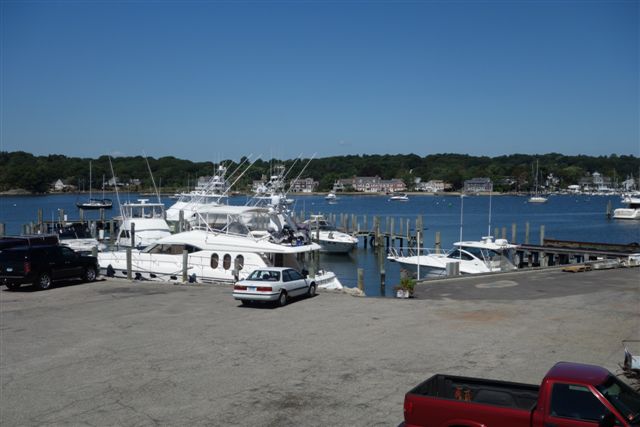 Both Suzi and I fell in love with Mystic and would gladly come back here again one day. We knew that we weren’t going to have nearly enough time on this enormous adventure to explore things in depth but we wanted to see as much as we could. We’d heard that Mystic was a 19th century seaport where tall ships line the mouth of the river. The Mystic massacre took place on Nov 27, 1637, during the Pequot War, when English settlers under Captain John Mason, and Narragansett and Mohegan allies set fire to a fortified Pequot village near the Mystic River. They shot any people who tried to escape the wooden palisade fortress and killed the entire village, consisting mostly of women and children, in retaliation for previous Pequot attacks. The only Pequot survivors were warriors who had been with their sachem (paramount chief), Sassacus in a raiding party outside the village. 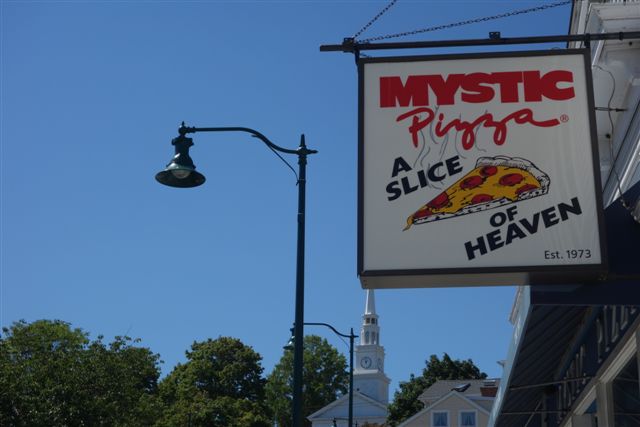 We didn’t actually go to any historic places to check all this out but we did venture down the main street where we saw Mystic Pizza, the venue 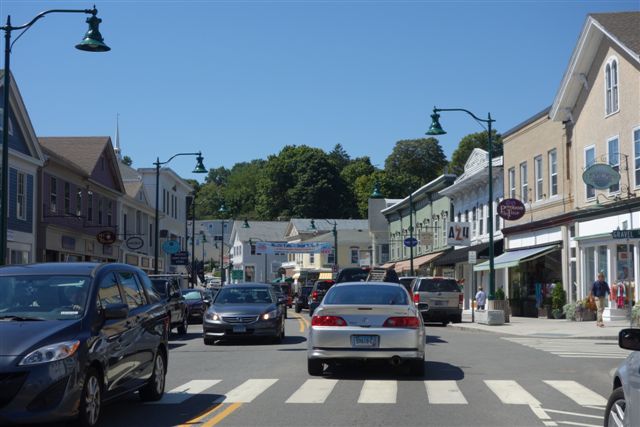 for the movie of the same name in which Nicole Kidman and Sandra Bullock were the stars. The main street itself was buzzing with activity. 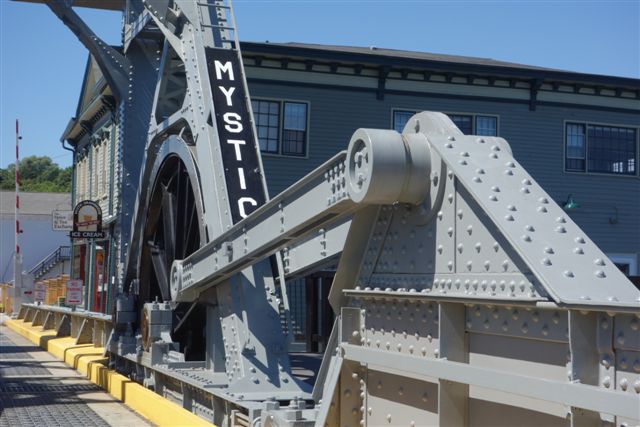 We passed over the drawbridge on the river and enjoyed seeing the mechanism, although we didn’t see it going up or down. 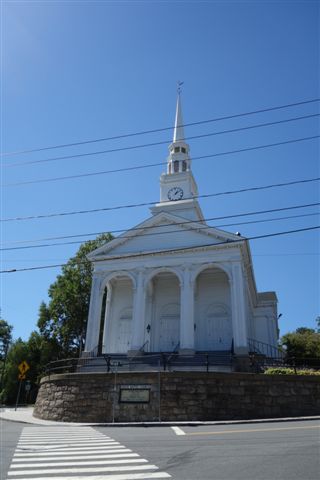 And because I can’t resist the beauty of some of the churches we pass from time to time (and there are very many) we took this photo of the Union Baptist Church. The only thing that makes photography difficult is the number of wires that cross all the roads. (You can see from these photos what stunning weather we were 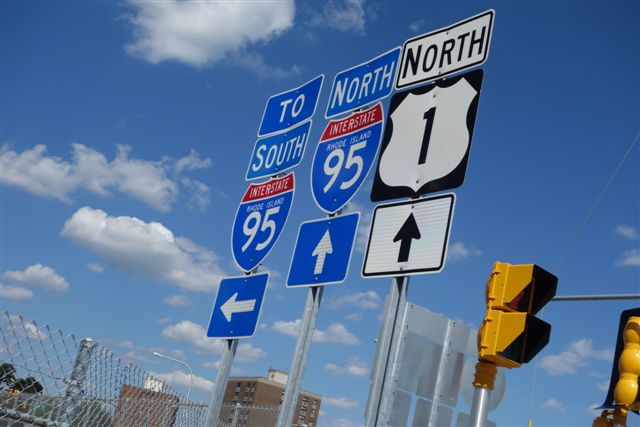 The driving is something I haven’t mentioned so far but it’s quite alarming at times, especially at intersections. 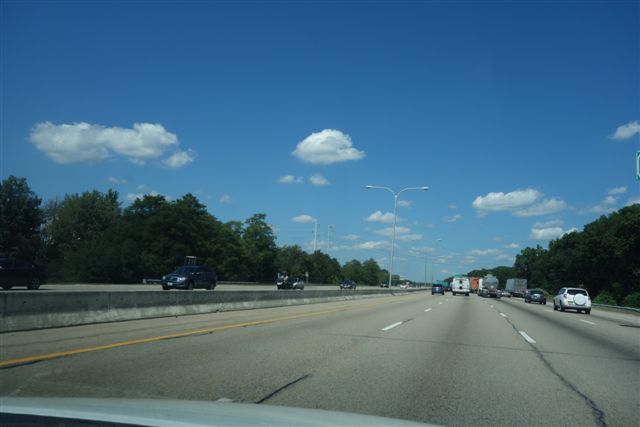 You may not believe me, but this was a very quiet stretch of road. We were travelling north on four lanes in this photo and there were four lanes behind the barrier on the left coming towards us. On many of the roads the traffic was solid and it was important for us to know where we were planning to go at least two miles ahead of a turn. Around big towns and particularly in New York, however, it was ‘mental’ and it was only thanks to the GPS that we managed to get everywhere we wanted to go without much going wrong. And we’d been told before we came that the speed limit in America and Canada is 50 mph. It’s not. On the motorways in the US it’s 65 mph and everyone speeds. So if you convert 75 mph into km, it meant that we were hurtling along at about 120 km with other cars hurtling along at similar speeds on all sides of us (mostly overtaking!)

Leaving Mystic, and Connecticut, behind us we thought we’d travel to Pawtuxet, Rhode Island, 55 miles away. Rhode Island is the smallest state in the US, an ocean state that boasts the oldest village, Pawtuxet, so we thought it was worth a visit. We’d read that Pawtuxet Village is a section of the New England cities of Warwick and Cranston. It is located at the point where the Pawtuxet River flows into the Providence River and Narragansett Bay and we wanted to locate this spot. 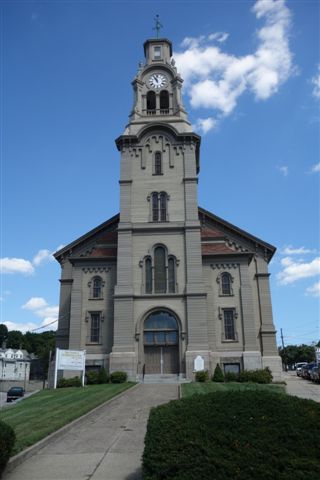 We found it very hard to negotiate Pawtuxet and kept driving between it and Providence, next door. Providence seemed to be more desirable – in fact, when we stopped to ask someone for directions in Pawtuxet, he told us to leave the area quickly as it wasn’t safe for us! We ventured back into Providence and came upon this lovely Temple of Restoration. 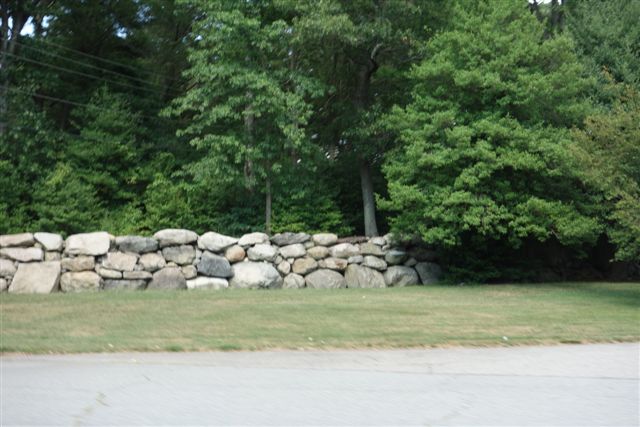 And we also passed this dry stone wall and wondered whether Ken had been here before us (although we all think the walls he builds are much better!)

Try as we would, we couldn’t find where the Pawtuxet River flows into the Providence River and Narragansett Bay. Finally, we had to admit defeat and make our way to Boston, a further 46 miles. 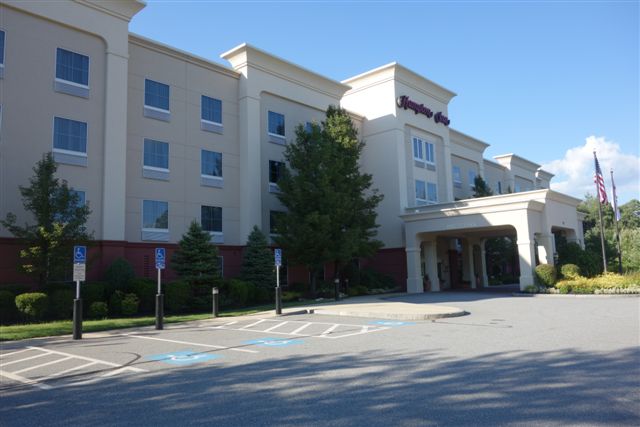 We were absolutely delighted when we arrived at our hotel called The Hampton Inn Bedford / Burlington in Billerica. Again we’d definitely recommend this and you can find it at 25 Middlesex Turnpike, Billerica 01821, Massachusetts, US, +19782629977. There was free breakfast, free WiFi and free parking and it cost us a total of £146.48 with taxes for three of us for two nights. 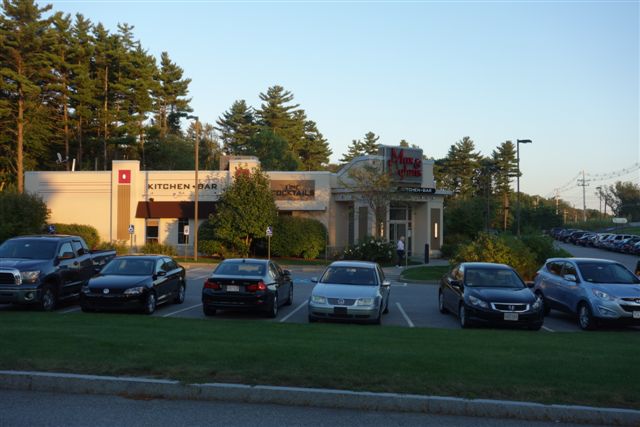 And, to our delight, there was a very adequate restaurant within the grounds which was only a very short walk and we enjoyed a meal there both nights.

After we’d unpacked, had a lovely dinner and watched another Federer win in the US Open, we left at 12.15 am for Logan Brown Airport in Boston to meet Julie off the plane from San Francisco. Little did we know about the surprise she had in store for us! She’d torn a calf muscle two weeks earlier and had been struggling to get better so as not to spoil her holiday. After a disastrous journey trying to find the airport and being continually diverted by road works, we found her standing outside Terminal E on crutches, wondering whether we’d forsaken her! We actually had almost as bad a journey home again (we think they just close roads at night and no-one had thought to tell our GPS) and finally got to bed at about 2.00 am. It was very lucky that we had such comfortable accommodation.