We all loved Montréal! And I suppose I loved it most of all because everyone spoke in French! I’d been told that the French spoken in Canada wasn’t going to be like the French spoken in France but this wasn’t actually the case with the people we spoke to. For those who haven’t visited Canada (and none of us had) Montréal is the largest city in the province of Quebec, the second largest in Canada and the eighth largest in North America! It was originally called Ville-Marie or ‘City of Mary’ but is now named after Mount Royal, the triple peaked hill in the heart of the city.

French is the city’s official language and is the language spoken at home by over 50% of the population followed by English at 20% and the remaining 20% of other languages. 50% of the population are able to speak both English and French, making Montréal one of the most bilingual cities in Quebec and Canada. Montréal is the second largest primarily French-speaking city in the world, after Paris.

Montréal was named a UNESCO City of Design. Historically the commercial capital of Canada, it was surpassed in population and economic strength by Toronto in the 1970s. It remains an important centre of commerce, aerospace, finance, pharmaceuticals, technology, design, culture, tourism, gaming, film and world affairs. In 2009 it was named North America’s leading host city for international association events, and in 2012 QS World University Rankings ranked Montréal the 10th best place in the world to be a university student! 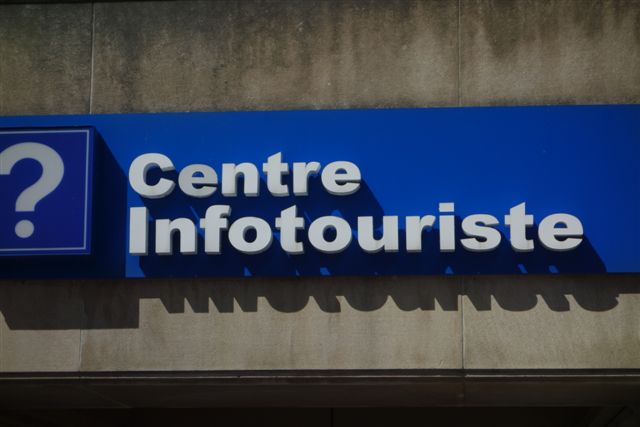 We had no reason to linger at the hotel so we got on our way fairly quickly, deciding to have breakfast as soon as we reached the Tourist Office down town and decided what to do for the day. 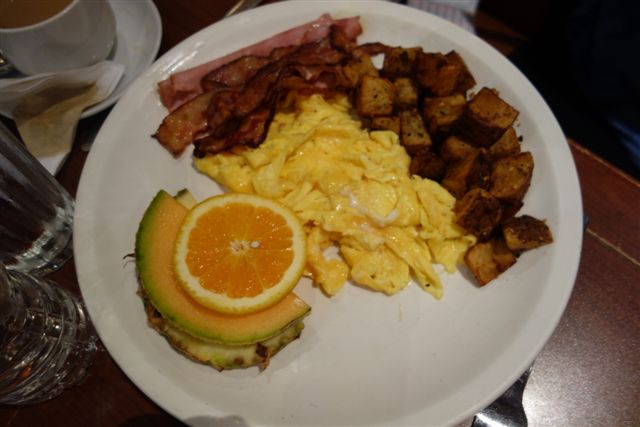 Our decision was to hop on and hop off but first we were directed to a lovely restaurant nearby where we had a breakfast large enough to last us for the whole day! And yes, that’s pineapple and melon under the orange beside all those eggs and bacon!

Unfortunately we had to waste a bit of time before we got started. Ever since I’d tried to pay for the hire car (BIG bill) in New Jersey, my bank had decided that someone criminal had got hold of my card and they’d put a stop on it. I’d tried many phone calls to the various help lines, I’d gone into their corporate office in Boston and been assured that all would now be well – but it wasn’t. So I visited the Bank in McGill Avenue and spent a whole hour with a very nice man who told me that he could give me up to C$2,000 in cash while it was sorted out – but he couldn’t sort it out himself. Reassured that I was now in funds, but concerned to be carrying around so much cash (not C$2,000 of course!) I went back to the Tourist Office to join the girls for the tour. 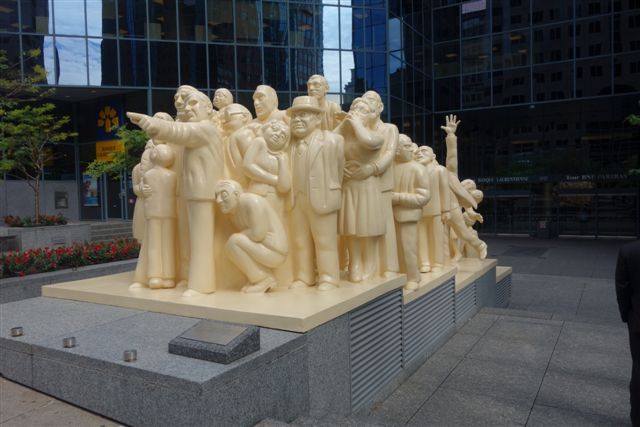 We passed several lovely sculptures all over the city. They all seemed to have a 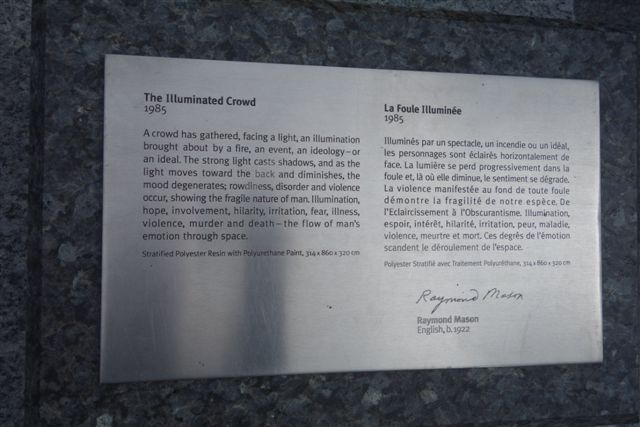 purpose in sending thought provoking messages. This one was outside the Bank. And the inscription read:

The Illuminated Crowd 1985
A crowd has gathered, facing a light, an illumination brought about by a fire, an event, an ideology – or an ideal. The strong light casts shadows, and as the light moves toward the back and diminishes, the mood degenerates, rowdiness, disorder and violence occur, showing the fragile nature of man. Illumination, hope, involvement, hilarity, irritation, fear, illness, violence, murder and death – the flow of man’s emotion through space. 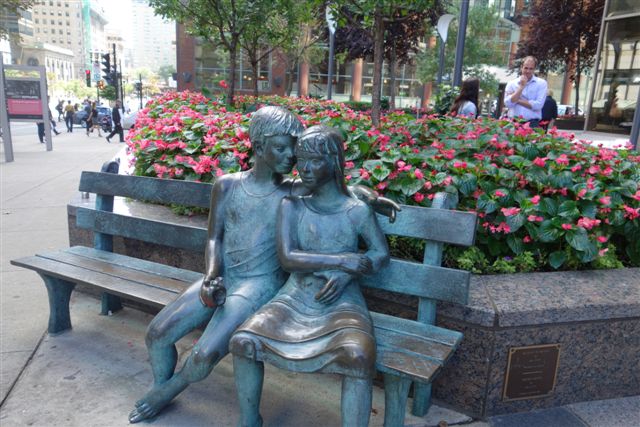 And some of the sculptures needed no interpretation! 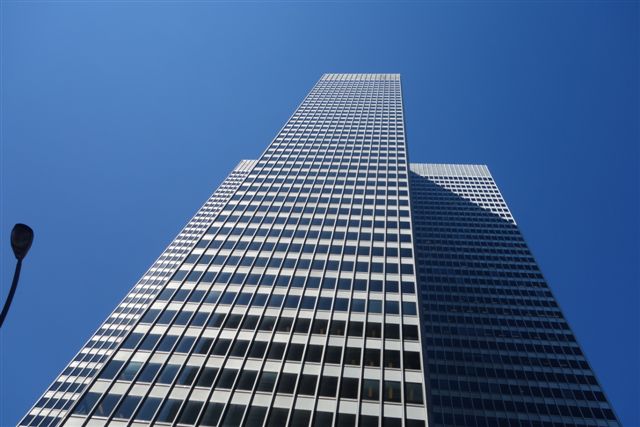 We stayed on the bus and passed a number of attractions – as you do. And some of them were very tall (note the blue sky – again!). 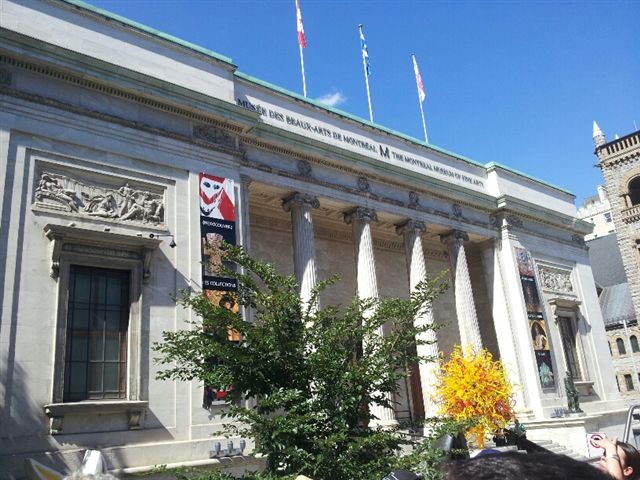 The Montréal Museum of Fine Arts is Montréal’s largest museum and is among the most prominent in Canada. 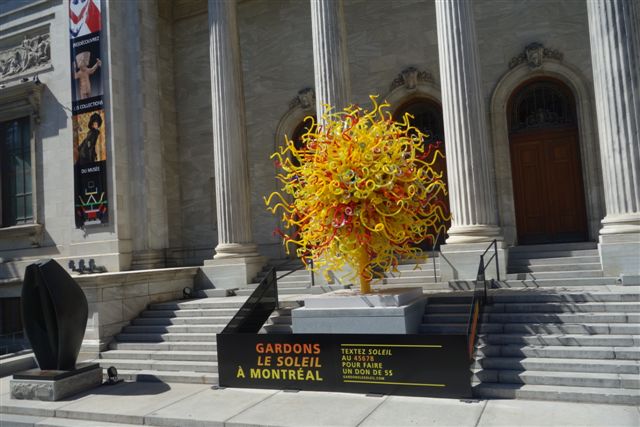 Outside, there was a wonderful sculpture which was made of blown glass. 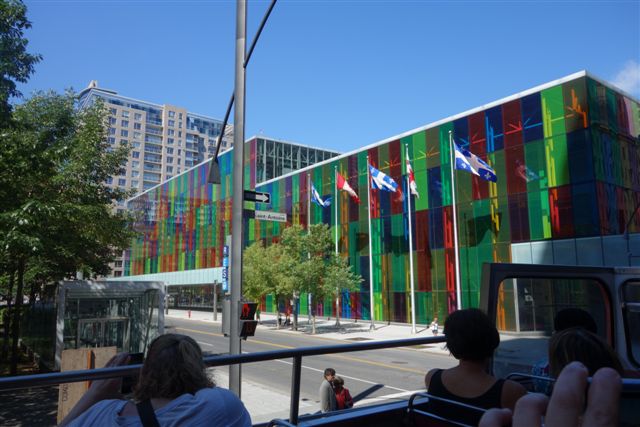 One of the most remarkable buildings we saw was the Palais des congrès de Montréal with its striking multi-coloured glass façade comprising 332 coloured glass panels and 58 transparent glass panels. During the daytime, when we saw it, these panels emulate a beautiful kaleidoscope. At night they apparently make for a scene right out of a blue impressionist painting.

The Palais des congrès is among the new wave of Montréal architectural symbols being touted worldwide. It has been featured in many prestigious magazines and travel guides. 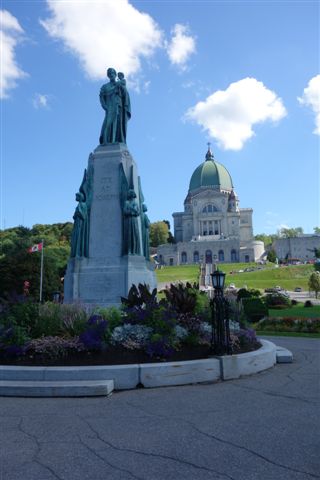 Our tour took us up Mount Royal where we found Saint Joseph’s Oratory which, rightly or wrongly, reminded me strongly of the Sacré Coeur in Montmartre, Paris. This is a Roman Catholic minor basilica and national shrine. It is also Canada’s largest church.

In 1904, Saint André Bessette began the construction of St Joseph, a small chapel on the slopes of Mount Royal. Soon the growing number of the congregation made it too small. In 1917 a larger church was completed that could seat 1,000. The construction of the basilica of Saint Joseph’s Oratory was finally completed in 1967.

We continued up to the top of Mount Royal where we were able to see the Mount Royal Cross. This is a monument which stands at the north eastern peak of the ‘mountain’ and overlooks the eastern part of the island. Paul Chomedey de Maisonneuve, the city’s founder, erected the first cross on Mount Royal in 1643, thereby fulfilling his vow to the Virgin Mary in his prayers to end a 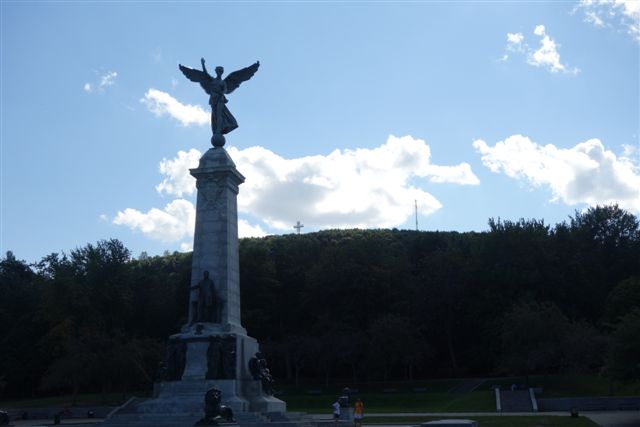 disastrous flood. Its significance has changed over the years.

I took a photo of the cross at the top of Mount Royal from its base in Parc Jeanne-Mance. The stunning ‘angel statue’ in the foreground is called Monument George-Étienne Carter and was erected in honour of a corporate lawyer of the same name.

The monument was originally unveiled in 1916 during World War I, then officially inaugurated three years later. It’s seasoned with symbolism from the nine maidens at the base representing the nine provinces of Canada at the time to the four lions guarding Cartier’s memory. (One source claims they represent the British Empire) to a winged figure called La Renommée (‘the renowned’ or ‘the famed’) reaching to the heavens. A soldier waving a flag was added post-war in 1919. 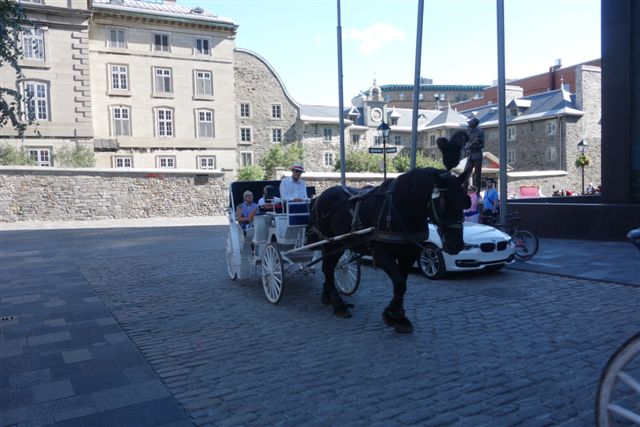 Back in downtown Montréal, people were going for horse and cart rides round the city close to the building we most wanted to see. 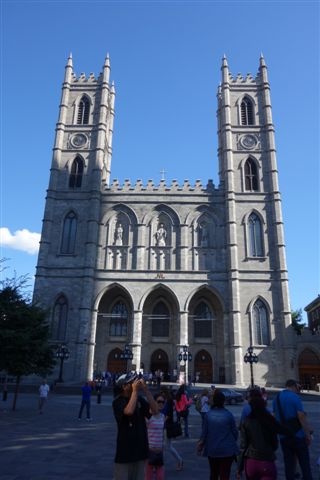 Montréal’s Notre-Dame Basilica is one of the crown jewels in Quebec’s rich religious heritage. 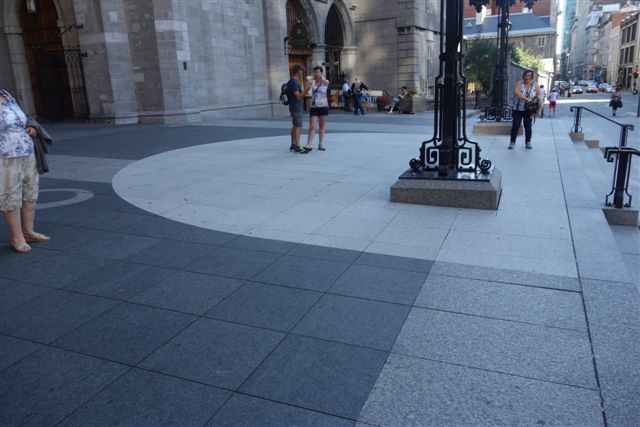 Dedicated to Our Lady the Blessed Virgin, ‘Notre Dame’, the small original chapel, was operated at first by the Jesuits. 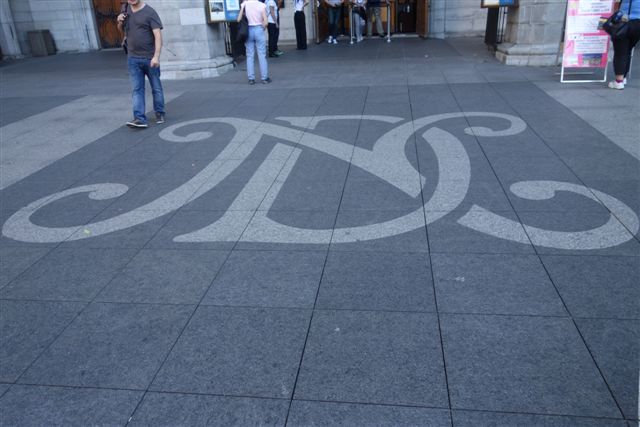 The place where this chapel stood is still marked out in white on the ground in front of the current Basilica. Also marked out in front are the letters ‘ND’. 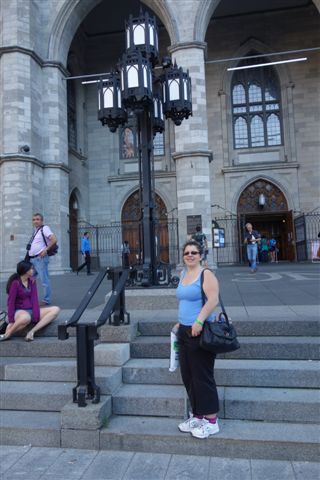 Julie in particular enjoyed all that there was to see, both inside and on the steps outside.

We had the most wonderful tour guide who took us through much of its history. In 1657, the Sulpician Fathers undertook construction of a larger church. The Sulpician, François Dollier de Casson, was its architect, and the present-day Notre-Dame Street served as the original site. Its construction, in Baroque style was completed between 1672 and 1683.

By 1800, Dollier’s church had become too small, and the Fabrique decided to build the church we know today. To design the new church, the building council engaged the services of the New York architect James O’Donnell, an Irish Protestant. O’Donnell and the Fabrique opted for the Gothic Revival style then in vogue in England and the United States. The main construction work took place between 1824 and 1829.

O’Donnell didn’t live to see his work completed. He died in Montréal in 1830. Just prior to his death, he had converted to Catholicism, and was buried in the new church’s crypt, where his grave is marked by a plaque. 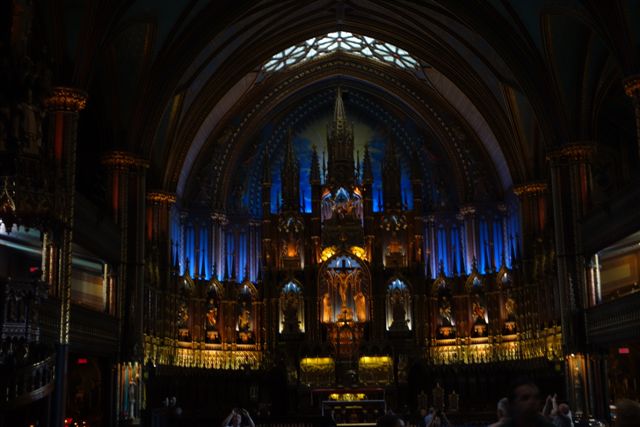 The inside is truly magnificent. Notre Dame church was raised to the status of basilica by Pope John Paul II during a visit to the city on 21 April 1982. 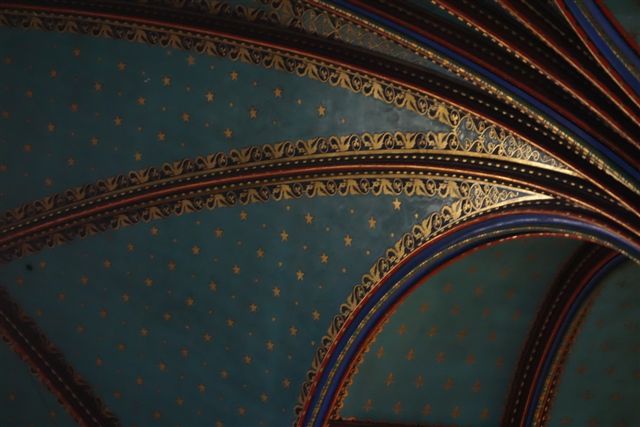 The Notre-Dame Roman Catholic Church was designated a National Historic Site of Canada in 1989. The Gothic Revival style Basilica is a Montréal landmark. 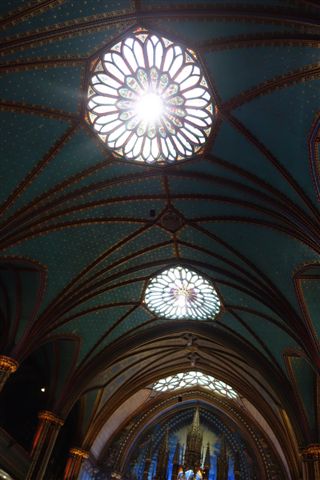 On 3 October 2000 Justin Trudeau gave his eulogy just steps from the High Altar during the state funeral of Pierre Trudeau, his father and Canada’s 15th Prime Minister. It was also the setting of Celine Dion’s 17 December 1994 wedding to René Angélil.

All throughout our visit, we had noticed that flags

lots of reasons. The red heraldic cross represents the ‘Christian motives and principles which governed the founders of the city’, according

to the city’s official web site. The four floral emblems represent the four main European ethnic groups that were settled in the city in the 19th century and which are also represented on the Canadian Red Ensign. They are (clockwise from top left) a blue Fleur-de-Lys of the Royal House of Bourbon representing the French, the original settlers of the city, a red Rose of Lancaster, representing the English and the Welsh, a Shamrock, representing the Irish and a thistle, representing the Scots. 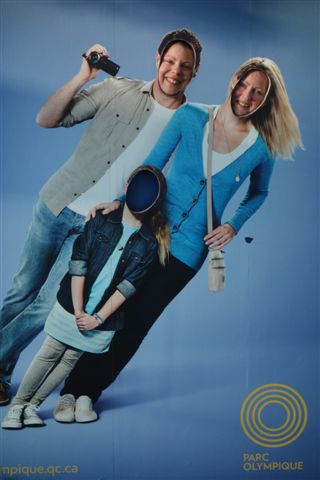 Making our way back to our hotel, we paid a quick visit to the Olympic Stadium, a multi-purpose stadium built in the mid-1970s as the main venue for the 1976 Olympics. 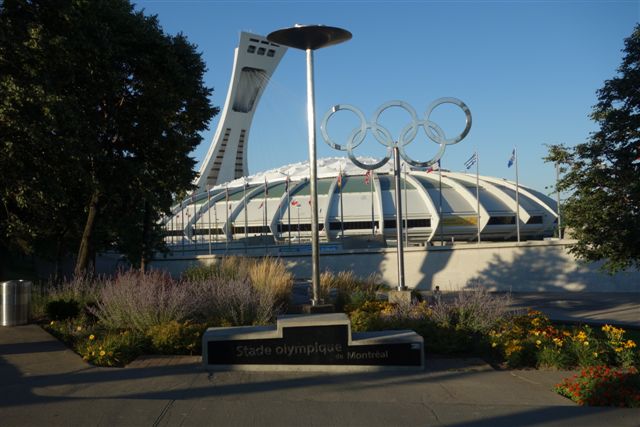 It is nicknamed ‘the Big O’, a reference to both its name and to the doughnut shape of the permanent component of the stadium’s roof. ‘The Big Owe’ name has also been used to reference the astronomical cost of the stadium and the 1976 Olympics as a whole. 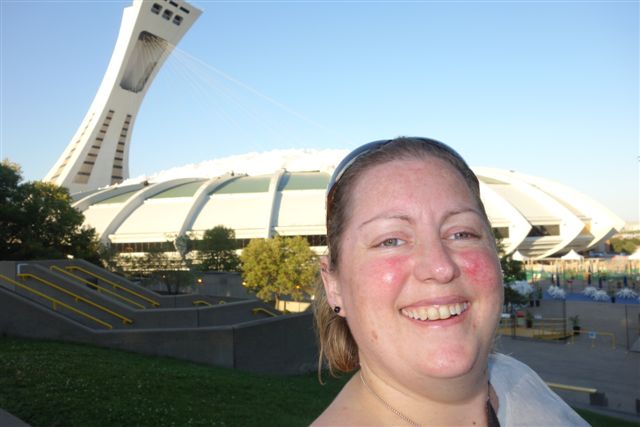 The stadium is the largest by seating capacity in Canada. After the Olympics, artificial turf was installed and it became the home of professional baseball and football teams. Suzi managed to take a quick selfie while she was exploring an area where people were skateboarding and playing tennis.

Even though our hotel was very disappointing, it did have one huge advantage. It was situated about 100m from a tube station. Mind you, we had to get used to the vernacular! It’s the Tube in London, the Subway in New York and the Métro in Canada (and Paris of course!). I haven’t a clue what it’s called in other parts of the world!

Montréal QC, Canada – 7 and 8 September 2014
+ Text Size -
Do NOT follow this link or you will be banned from the site! Original generation time 0.2502 seconds.