Our perfect weather from New Jersey to Banff National Park came to an end today. We’d wondered if it would happen because we’d been so fortunate until now. We were so grateful that we’d had two days exploring the Rockies in beautiful sunshine and had seen ‘as far as the eye can see’. So, driving the same route north for the first hour was not as much of a disappointment as it might have been. The cloud cover was pretty low and the rain was torrential so taking photos was a challenge!

The Icefields Parkway Highway between Banff and Jasper National Parks is under 300km long and can be driven within 4 hours but with the amazing beautiful and vastly changing landscape most tourists take all day to cover this distance. We certainly did! 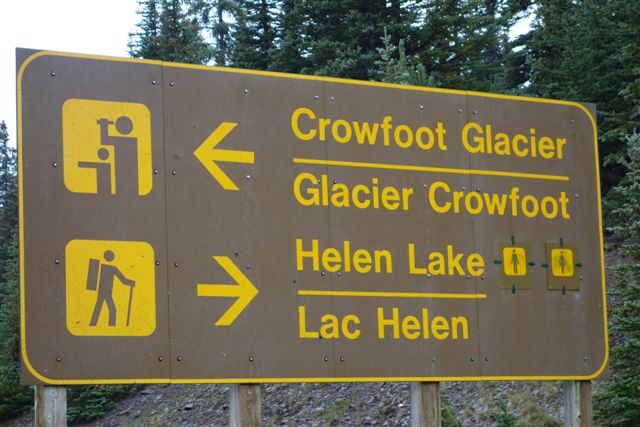 Today we were going to explore the Columbian Icefields and we hoped the weather would improve before we reached the bits we hadn’t already seen in YoHo National Park. The 230km Icefields Parkway (often called the most scenic highway in the world), named for its tremendous glaciers which flank its westward side, weaves up and around the mountains between Banff and Jasper National Parks as it parallels the Great Divide. With rain still falling, we reached Crowfoot Glacier and Herbert Lake. 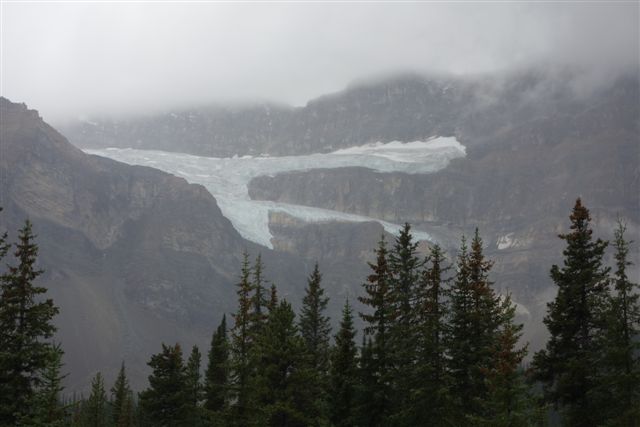 Crowfoot Glacier is 32km northwest of Lake Louise. It’s situated on the north-eastern flank of Crowfoot Mountain. Its east of the continental divide and runoff from the glacier supplies water to the Bow River. The glacier has retreated since the end of the Little Ice Age and 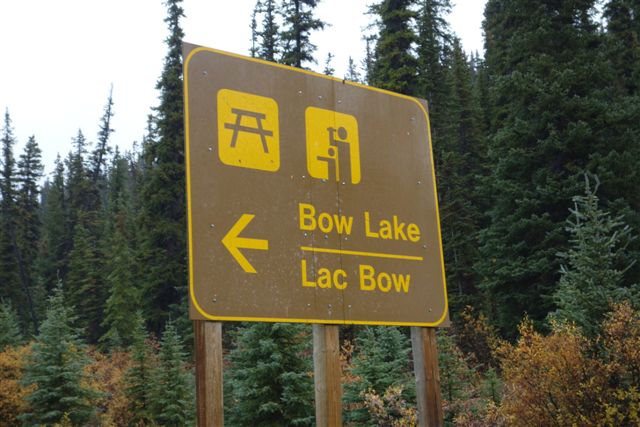 has now lost one entire lobe so it no longer resembles the glacier which early explorers named. Measuring 1.5km² now, it still has two toes and, despite the mist, we thought it looked pretty impressive.

The next glacier we passed was Bow Glacier only about 5km further north. 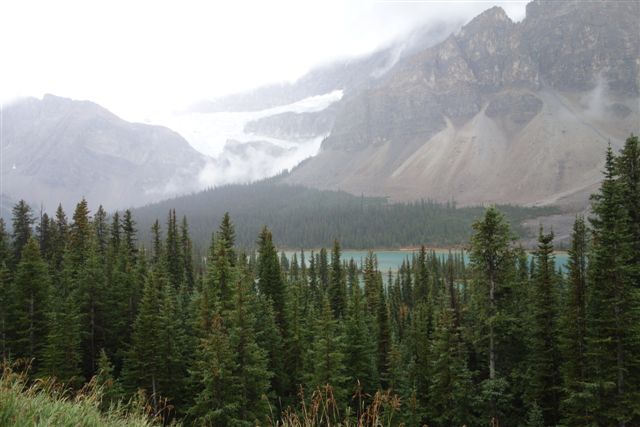 It’s an outflow glacier from the Wapta Icefield and runoff supplies water to Bow Lake and the Bow River. The glacier is credited for creating the Bow Valley before retreating at the end of the last glacial maximum. 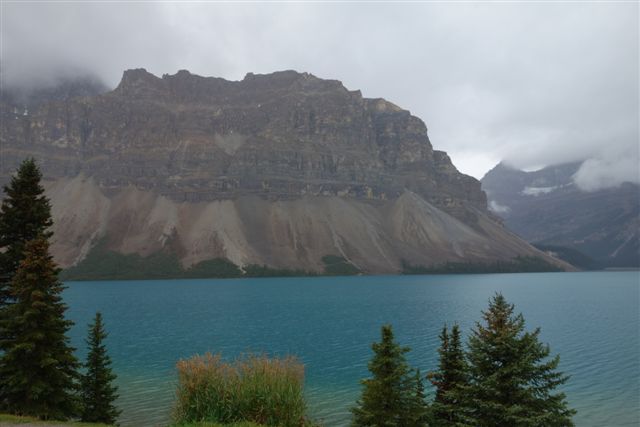 Since the end of the Little Ice age in 1850, Bow Glacier has been in a state of steady retreat overall. Between 1850 and 1953, the glacier retreated an estimated 1,100 metres 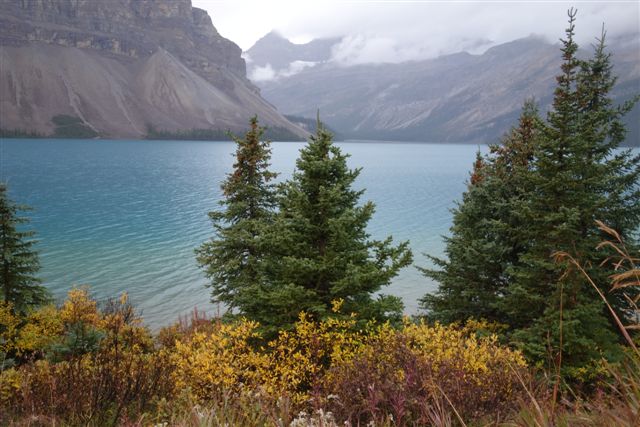 and since then there has been a further retreat which has left a newly formed lake at the terminal moraine. 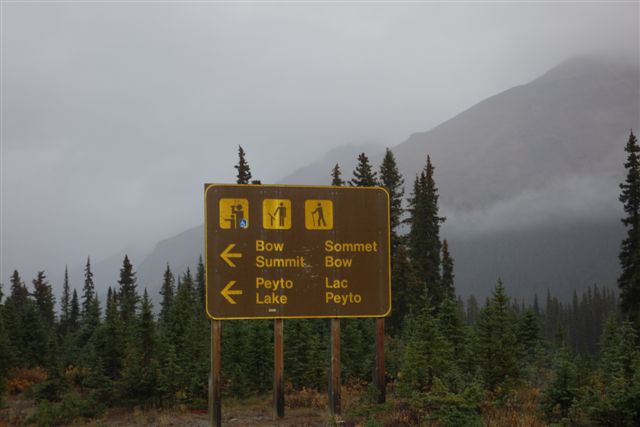 was previously protected by the glacier.

Bow Summit, the highest point on the Parkway, is a remarkable viewpoint for Peyto Lake. 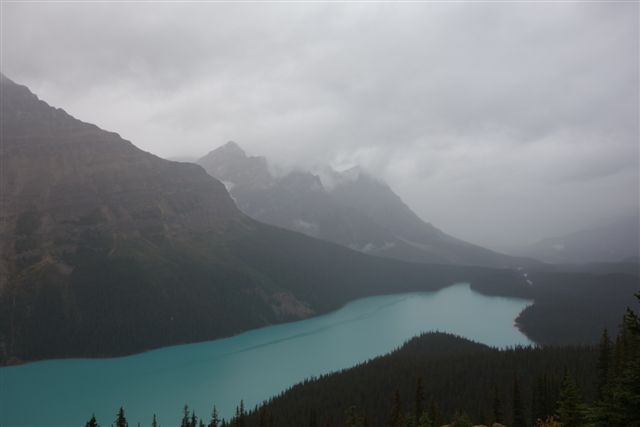 The lake’s teal colour (not very visible in this photo because of the mist) is light reflected by suspended glacial sediment and minerals coming down from the Peyto glacier. Signs at the Summit tell of William “Wild Bill‘ Peyto, mountain guide, and Banff’s first game warden. 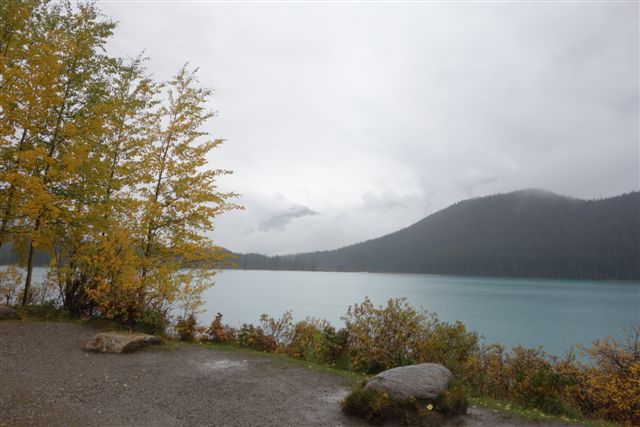 We continued the drive north on the Icefields Parkway, and came upon Waterfowl Lakes. The small lakes appear quite large, because they’re right next to the road. They are unmarked by any signs, leaving us 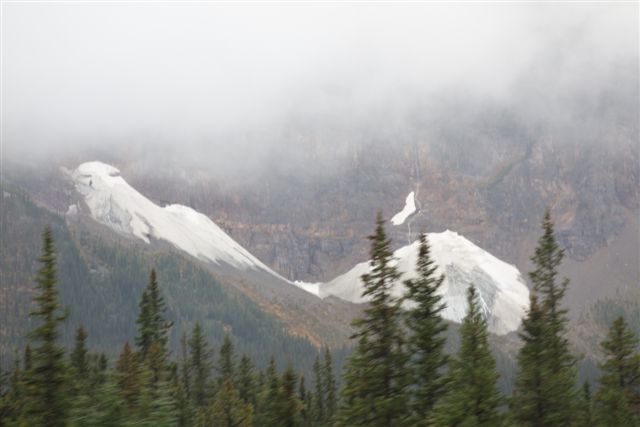 wondering exactly what they were, but fortunately we had an excellent map of the area and guessed at what we were looking at!

We kept happening upon amazing glaciers on the west of the road as we drove north. Because the rest of the mountains were not covered in snow (yet) they stood out magnificently (and enormously). 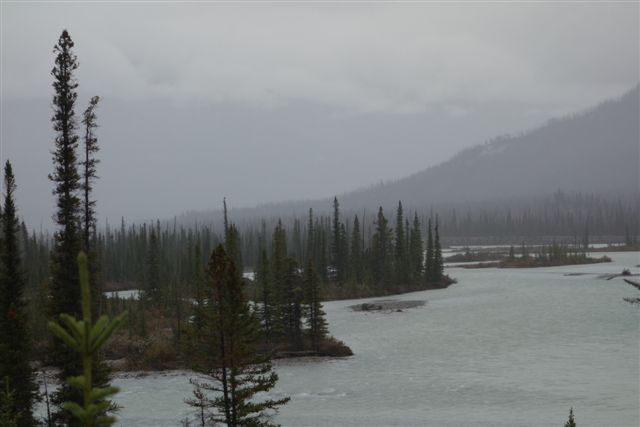 Before we reached the Icefield Centre, we came to the Saskatchewan River Crossing. Saskatchewan boasts nearly 5m hectares (12 million acres) of parkland and 100,000 lakes and is home to some of North America’s most ecologically important wetlands. Vital and renowned staging areas such as the Quill Lakes Centre at Wynyard, the Wadena Centre at Wadena and the Foam Lake Centre at Foam Lake provide refuse for millions of migrating birds, including the endangered Whooping Crane. 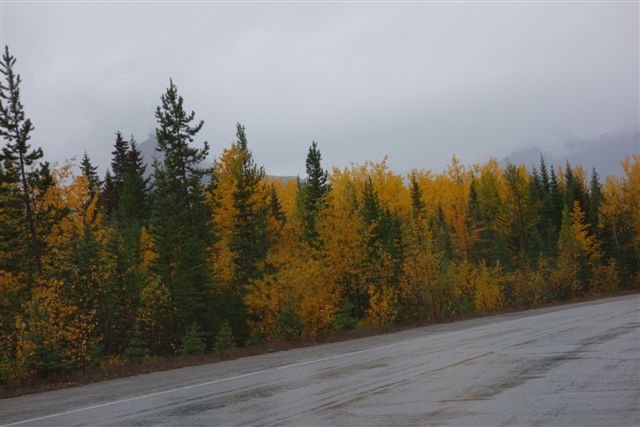 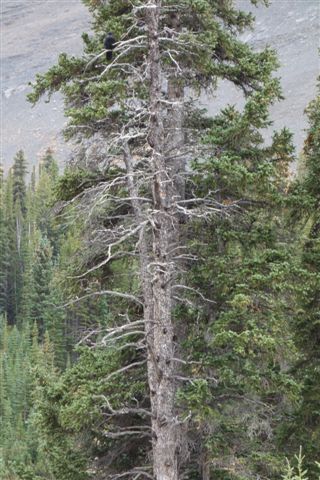 Meanwhile, at the side of the road, we continued to be treated to evidence of Fall.

And, very upsettingly, we saw yet more evidence of the ravages of the pine beetle. This one was at Parkers Ridge. 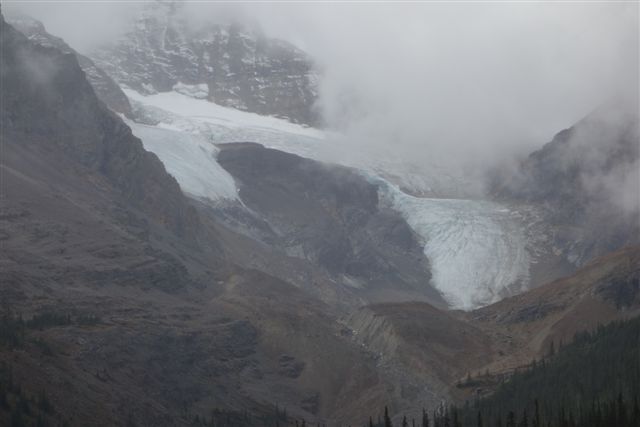 Nearing the Icefield Centre, we caught this sight of the back of the Athabasca Glacier.

And finally came to the Centre itself where we were going to take up the second and third parts of the gift from Suzi, the Icefield Walk and the visit to the Sky Walkway. 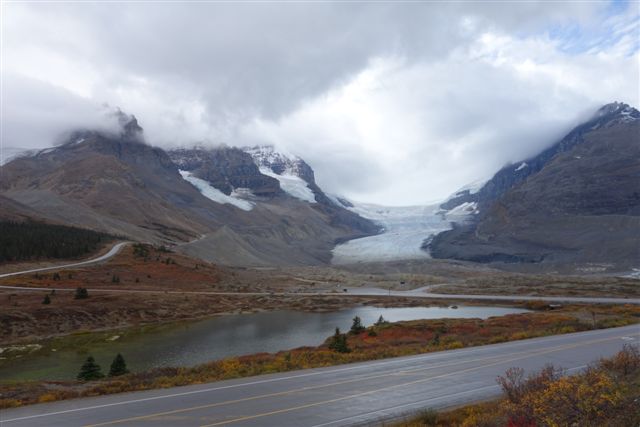 The Centre is closed in winter and left completely ‘unguarded’. When one tourist asked whether that was a safe thing to do, the guide replied that he didn’t think that anyone in their right mind would make their way through 10 feet of snow surrounding the building just to steal a

television! It actually looked pretty cold and remote as it was so he had a point.

We decided to visit the Sky Walkway first and, to our delight, the clouds were clearing and the sun was coming out. How lucky was that? 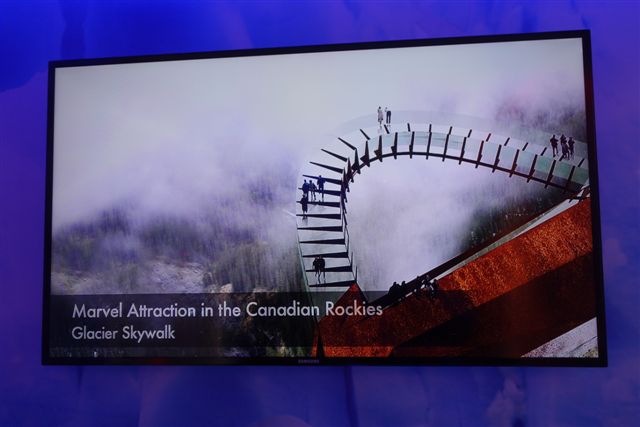 We were taken in a bus to the almost brand new Centre which is an amazing feat of engineering, design and construction. This sign at the Centre shows how the Ice Walk protrudes over the valley below. This was one of the signs that shows the complete structure of the Ice Walk from below. 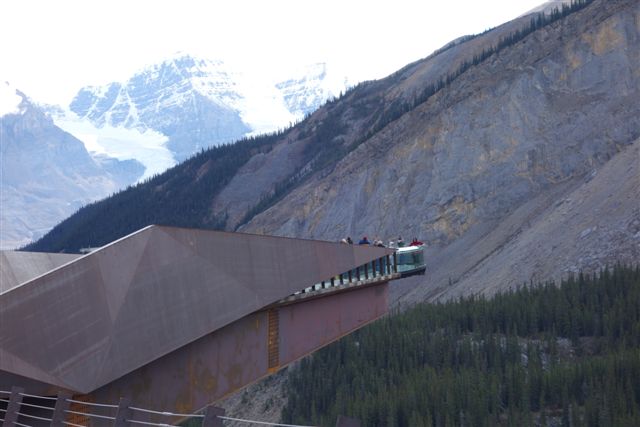 I only managed to get a photo from the bus stop which shows how it ‘hangs’ (a bit frighteningly!) over the valley below. We were told that almost every piece of the Skywalk was designed specifically for this project. Each part was custom-built from individual plates of steel and welded together into the structure we were standing on. The steel tubes used around the inside of the glass walkway had to be bent in three dimensions; they carry inside them the same type of cables that would be found in a large cable-stayed bridge. Standing so far above the ground below, we were very grateful that we were safe! 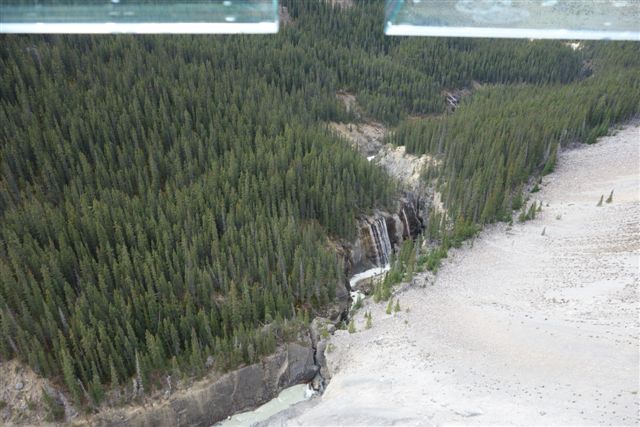 The photos don’t actually show quite how far below I’m talking about but suffice it to say, it 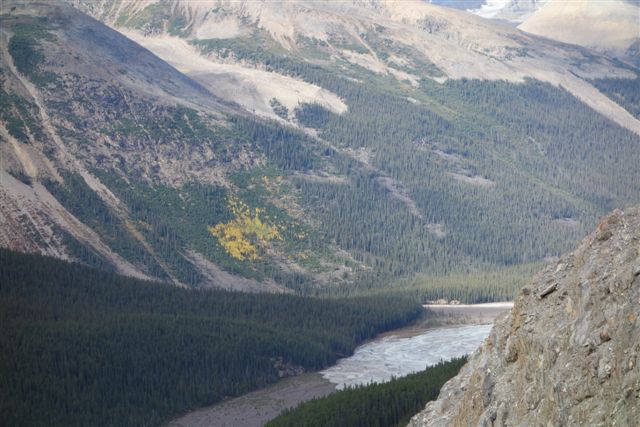 feels like miles below and Julie, certainly, stayed quite a long way away from the edge. This was the view to the right of where we were standing.

This one was to the left, towards the Athabasca Glacier. 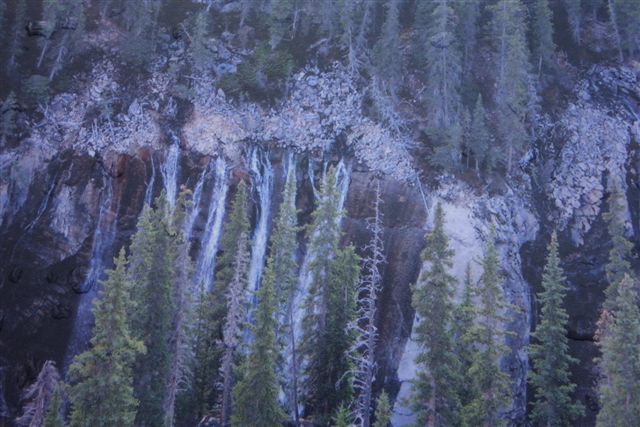 And this one was immediately below. In fact, whichever way we looked, the terrain was different, but always dramatic and powerful. 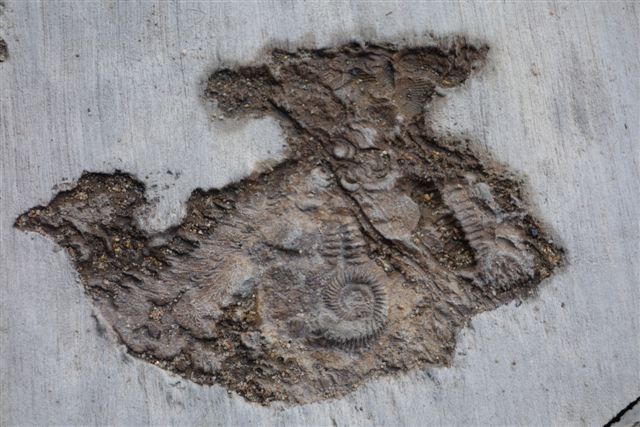 guide was fascinating and jam-packed with information.

On the ground below our feet were, among other things, evidence of fossils, set into the pathway. 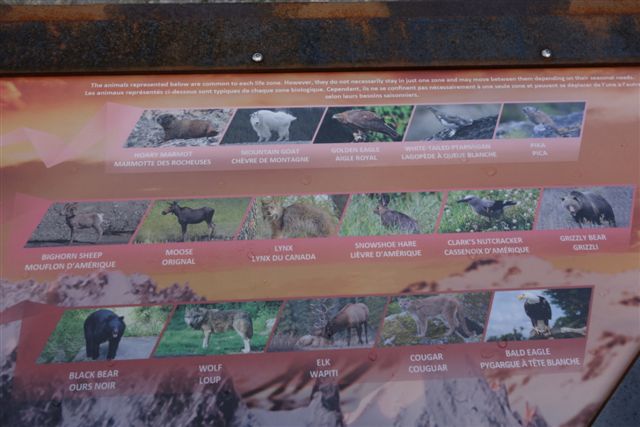 In fact, despite the very cold and cutting wind, we stayed up there for a long time. It’s possible to return to the Centre on any of the buses which arrive and leave every 20 minutes.

The rain had stopped but the sun was beginning to drop down towards the horizon so we had to leave so that we could go on our third treat – a walk on the Athabasca Glacier. The whole Icefield lies partly in the north-western tip of Banff National Park and the southern end of Jasper National Park. It is about 325km² in area, 100 to 365 metres deep and receives up to seven metres of snowfall each year. The Icefield feeds eight major glaciers, including the Athabasca Glacier.

The Athabasca River and the North Saskatchewan River originate in the Columbia Icefield, as do tributary headwaters of the Columbia River. As the Icefield is atop a triple Continental Divide, these waters flow ultimately north to the Arctic Ocean, east to Hudson Bay (and thence to the North Atlantic Ocean), and south and west to the Pacific Ocean. 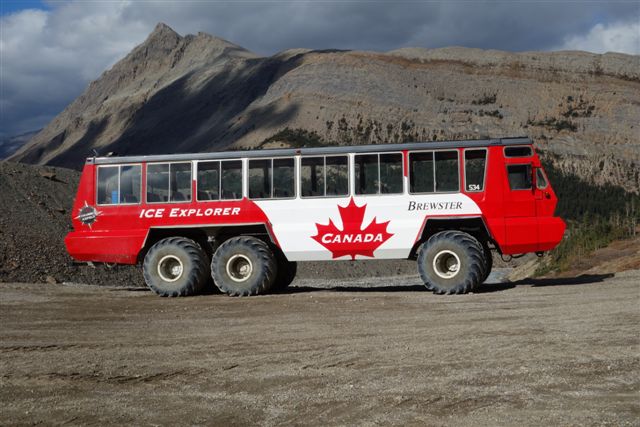 Seen from the Centre, it was hard to imagine how we were going to get up on the Glacier, but we soon found out! Coaches took us as far as they could and then we were all herded into one of these which cost in excess of US$1m each. 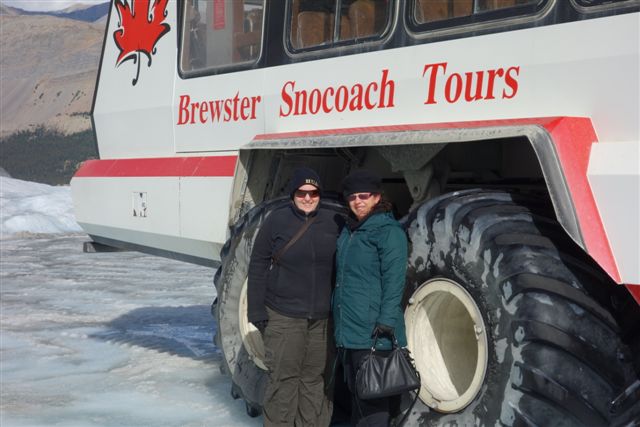 And we set off up the road that’s actually been formed on the Glacier itself. These ‘buses’ may not look very different from a distance but they are, and they have very, very big wheels! 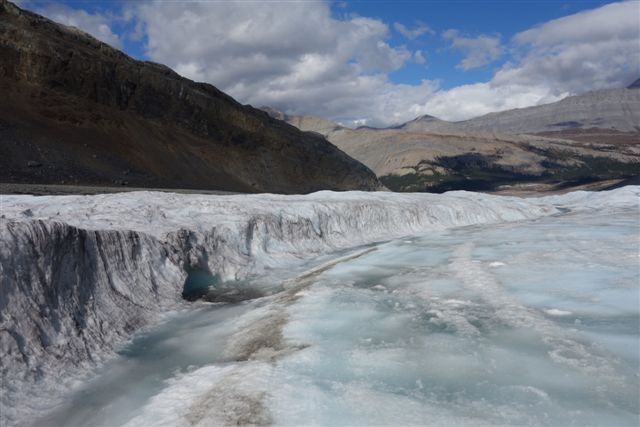 We were encouraged to walk around for half an hour and take extra care not to slip!

I stayed just long enough for a photo 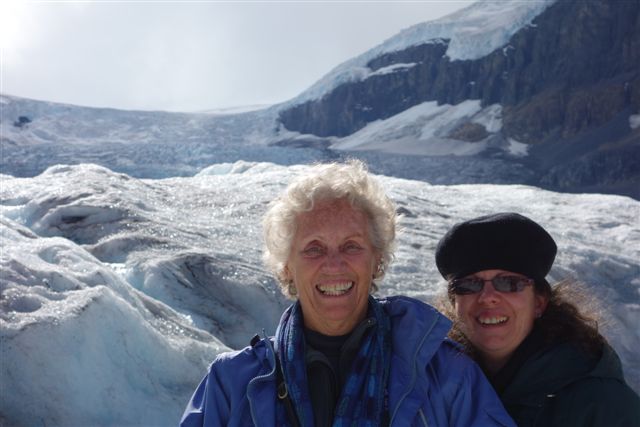 opportunity and then retreated gratefully to the bus to talk to the driver. I considered that falling on the ice would not be my action choice for the day! 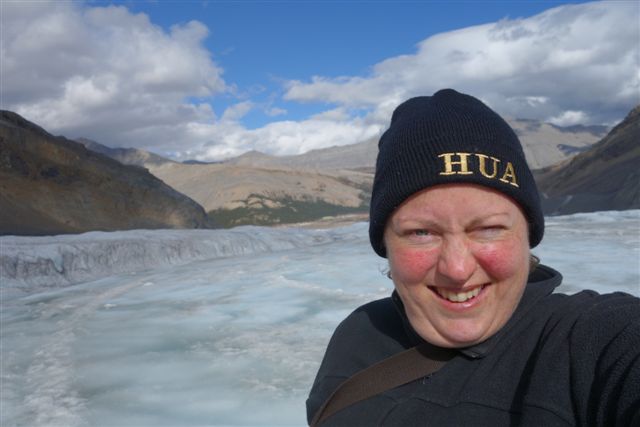 But Suzi and Julie had a good walk around and got some great photos, including of each other! And you can see just how strongly the sun was shining again by this time.

Being up close and personal with the Glacier was a moving experience (no pun intended). Standing on the ice that is thousands of years old, we could get a feel for what the last ice age was like. 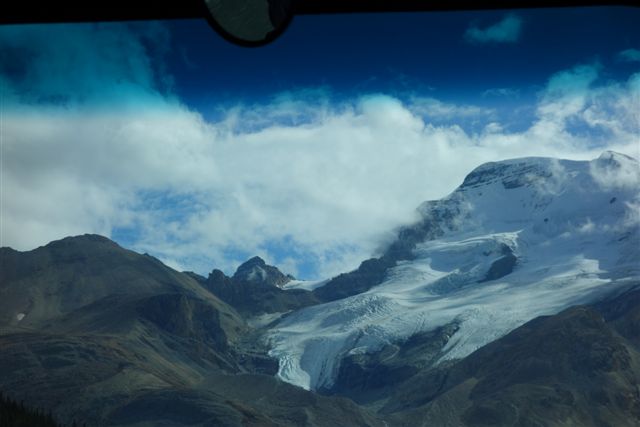 This massive Glacier is not only in walking distance from the Parkway road, but it is 6km long and 1km wide. But what’s visible from the road is only a small portion of the Columbia Icefield. The rest of the ice mass is hidden beyond the mountains. There are six glaciers that it feeds, the three that can be seen from the Parkway are the Dome, Stutfield and Athabasca. This is one of only two places in the world that forms a triple continental divide. The Dome is here on the right, just hidden by the low cloud. 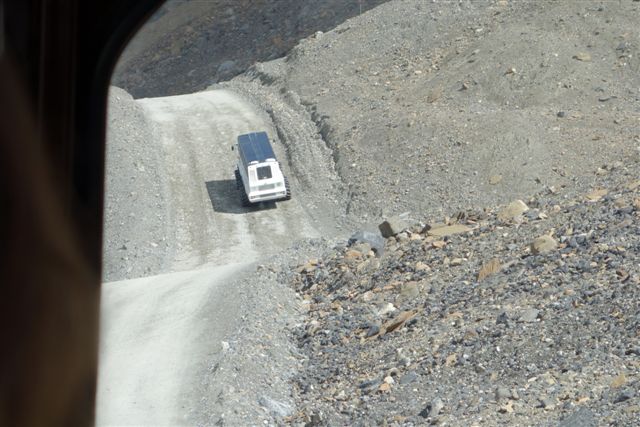 The wind chill factor up on the ice made it pretty cold so we were quite relieved to make our way down again, watching the ‘bus’ in front of us chugging up one of the ‘hills’. They travel at very low speeds – in fact they actually can’t increase speed beyond 5kph. 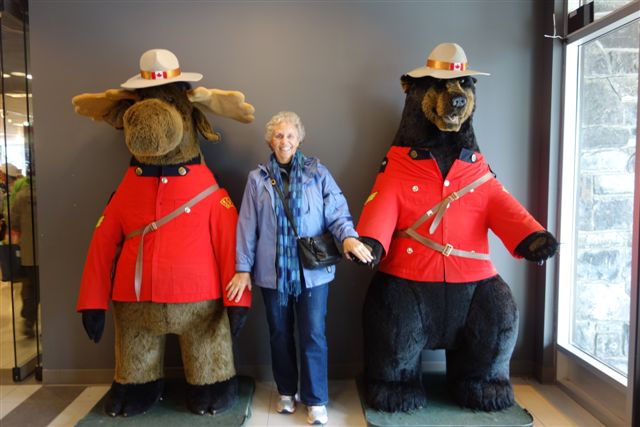 Back in the lovely Centre, we warmed ourselves up with a couple of the locals before setting off for the last, short, leg to Jasper.

We’d had the most wonderful experience where the most used words in the car were ‘Oh wow! Stunning! Absolutely stunning!’ It was good to get to our accommodation in Hinton, north east of Jasper and reflect. It was an OK hotel but not good enough to mention.

Icefield Parkway Highway AB, Canada – 23 September 2014
+ Text Size -
Do NOT follow this link or you will be banned from the site! Original generation time 9.2700 seconds.