So I was off fairly early the next morning to travel by tube from East Putney to Liverpool Street and thence to Broxbourne – my old stamping ground. I wondered how many times I’ve travelled that route back in the 1960s when I studied and worked in London!

Angela and David live fairly close to the station and she was there to walk with me to their home. They stayed with me in New Zealand a few years ago and suggested that, when I was next over, they’d be happy to host a party at their house for our various friends. How kind is that? 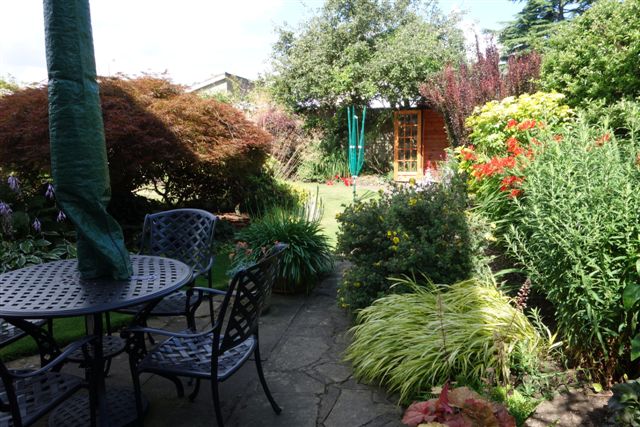 Despite having known Angela for years, I’d actually never been to their home and their garden was an absolute picture. David tells me that it’s his main hobby and that was certainly evident. 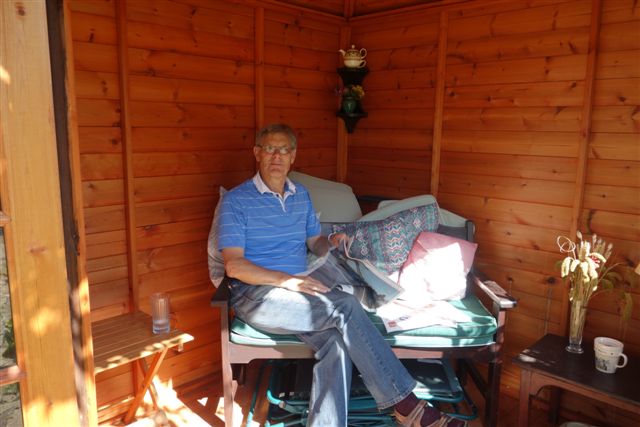 He also admitted that reading and relaxing in their summer house was one of his treats and I caught him doing just that!

There isn’t much to beat an English country garden with the herbaceous borders and there was colour everywhere. It was a bright 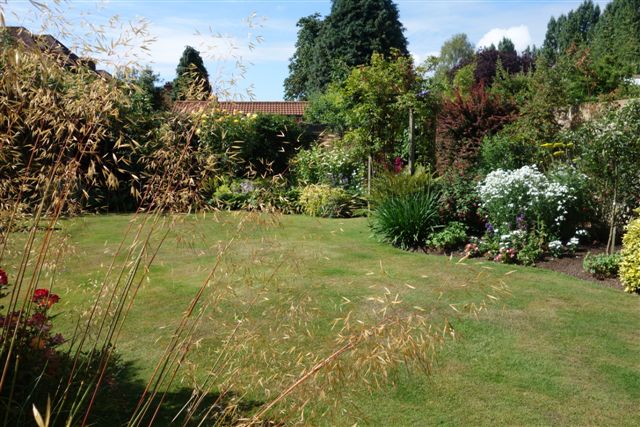 sunny day so it was difficult for the camera to do full justice to the various shrubs, plants and flowers but it all looked fabulous and all the guests were equally impressed when they came the next day.

Monday was reserved for last-minute party shopping so off we went to Sainsbury’s. Hoddesdon has actually changed quite a bit and that was interesting in itself.

When we got home and did the odd ‘thing’ (and there wasn’t much because Angela had done so much in advance) she suggested that I visit two very dear friends just a short walk away because they weren’t able to come to the party the following day. What a sad story but what a fabulous visit. Ken used to be one of the best hockey players in the club and coached many of the juniors. Maggie was one of the stalwarts of the tennis brigade so I saw a great deal of them and their lovely children back in the 60s and 70s.

But Maggie had a hip replacement several years previously which didn’t go as well as had been expected and she had to have the joint removed when an MRSA infection set in. This might have been the end of it but it has been causing her almost continuous trouble which came to a head a few months ago. The infection came back with a vengeance and Maggie was whisked into hospital where she stayed for 14 weeks. She was only allowed home two weeks ago and, under normal circumstances, they’d have loved to have come to the party. But the hospital had been slow to respond when the MRSA attacked her optic nerve and now she is completely blind. What a tragedy.

Despite that, we had a fabulous couple of hours together and reminisced about all sorts of things that one or other of us had all but forgotten. And great memories they were too. 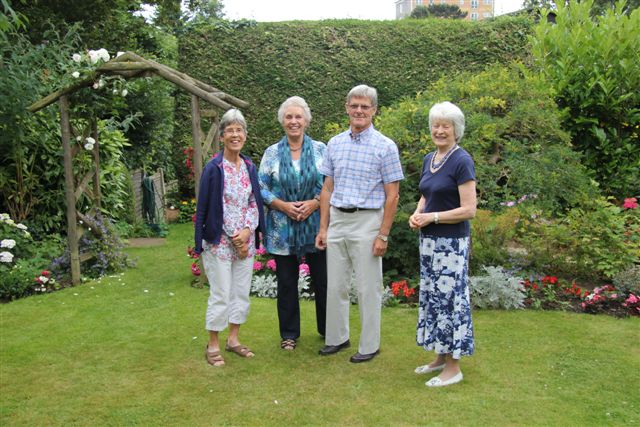 That evening we went out to dinner with other friends from way back who live just around the corner because John, the husband, had another engagement the next day. We strolled around their fabulous garden (another one!) and John told us what he was growing in his allotment nearby – four times the size of the one at his home (behind the hedge).

Of course dinner was largely made up of delicious fruit and vegetables from the garden, grown in the height of the English summer and very delicious. 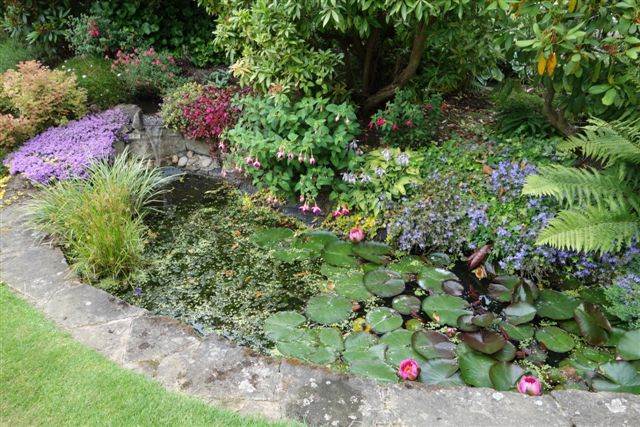 Next morning we were all up early to make sure everything was in place for the arrival of our guests. I reminded David that he was going to turn on the fountain in his pond before the guests 3arrived and this was duly done. 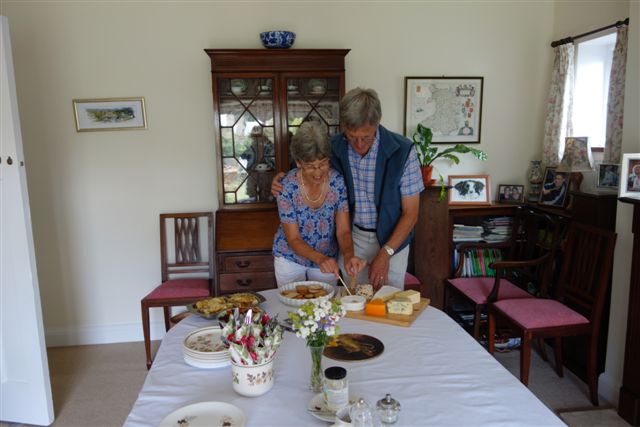 And when we were nearly ready to set out the food, I persuaded my hosts to pose for a photo behind the cheeseboard so that I could capture them before the party began!

Fortunately the weather was fairly kind although there were a few spots of rain towards the end. 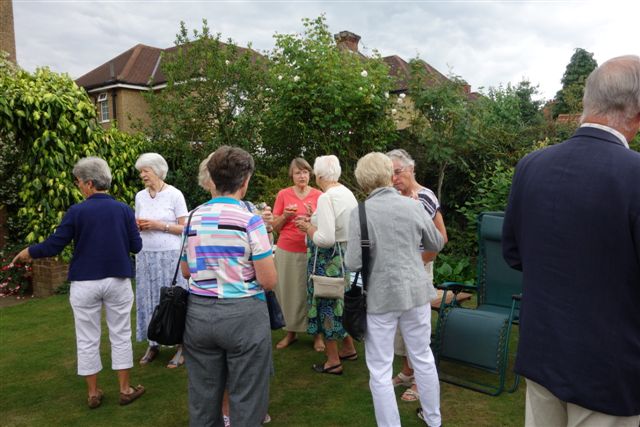 But everything had been set up in the garden and, after collecting our food from the beautiful buffet, we were all able to mill around and catch up.

Some of the friends were from hockey, some from bridge and some from tennis so it was a great reunion. The hockey friends particularly hadn’t seen each other for a long time because three of them were not Broxbourne players but friends I’d played for in the Hertfordshire or East of England teams. Cries of surprise and pleasure were a delight! 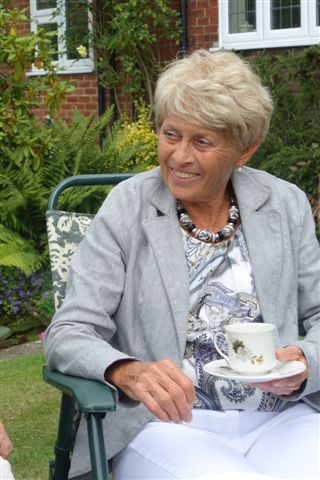 And, for those of you who have read my 2012 blog about my visit to Slovenia, Linda was there too.

The day had started out with bright sunshine but there was a bit of a breeze which brought some shower clouds with it. Fortunately they passed before I had to leave to catch my train back to London. But before I did, and after we’d restored the house to a sense of normality, Angela spent some time showing me how to use the photo software, Picasa 3. This was a real treat because it’s much better than the software I’ve been using and will make it much easier to crop, size and manipulate my photos.

So, it was back to London again to regroup for a couple of days before setting off on my next adventure …