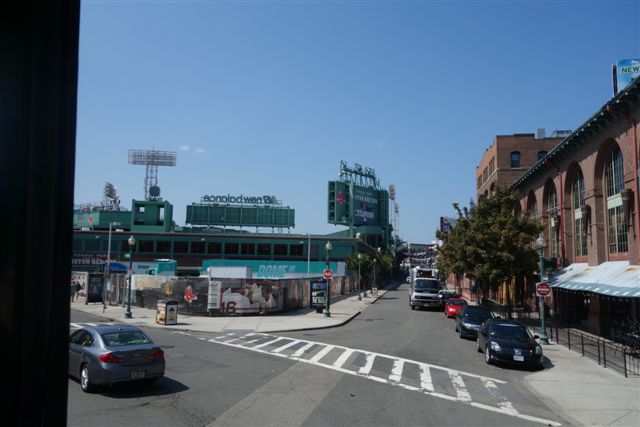 Boston is the capital and largest city in Massachusetts. The greater metropolitan area is home to 4.5 million people (7.6 million if you count the commuters) and we think we met them all! The day we decided to visit the city, the Red Sox were playing at home (but not, fortunately, until the evening). This is the Stadium where the Red Sox play their baseball. Everyone told us that the Red Sox are having a very bad season but that they were once world champions!

However, the freshmen starting the term at one of the very many universities were arriving in U-Haul vans and it was the last day of a jazz concert!

Boston is one of the oldest cities in the United States. It was the scene of several key events of the American Revolution such as the Boston Massacre, the Boston Tea Party, the Battle of Bunker Hill and the Siege of Boston. We heard all about these things as we travelled around on Hop On/Hop Off buses and it was very interesting.

When Boston gained independence from Great Britain the city continued to be an important port and manufacturing hub as well as a centre for education and culture. Through land reclamation particularly, Boston has expanded beyond the original peninsula and its rich history helps to attract many tourists with Faneuil Hall alone attracting over 20 million visitors each year. 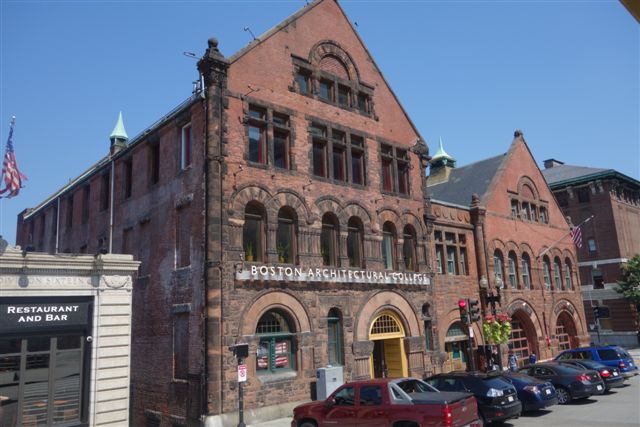 There are heaps of colleges and universities which make Boston an international centre of higher education and medicine and the city is considered to be a world leader in innovation for a variety of reasons. One of its ‘claims to fame’ is that the city has one of the highest costs of living in the United States. This is the Boston Architectural College so you can see that some of the buildings are quite unlike the appearance of our universities and colleges in New Zealand.

We weren’t up as early as we’d have liked in the circumstances and had to create a day that would make it easy for Julie to get around as she could still only walk very slowly. So we decided to take advantage of the Hop On/Hop Off bus with a side trip on the Charles River. Our first guide was called Steve and he was absolutely fantastic – and we finished up with him too at the end of the day which was a special treat. His knowledge of the history of Boston was amazing. 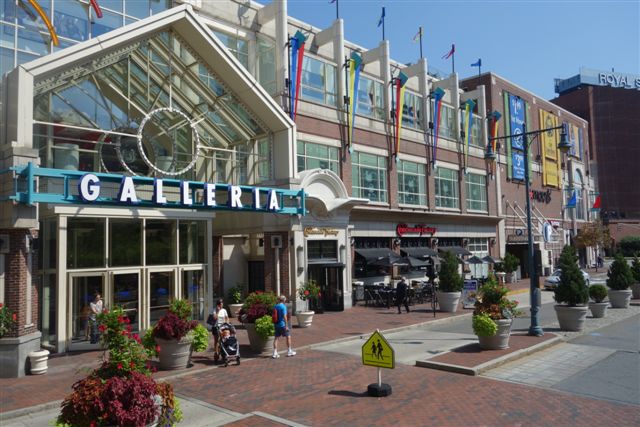 Of course we seemed to go everywhere around this very small city. We started at the Galleria, which was also the stop for the side trip to Harvard and the cruise along the Charles River. 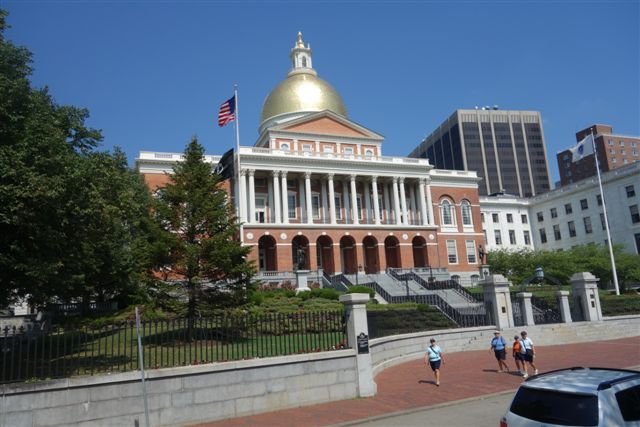 We passed Massachusetts State House which was apparently a 1798 legislative masterpiece of the time and the model for capitals around the country. 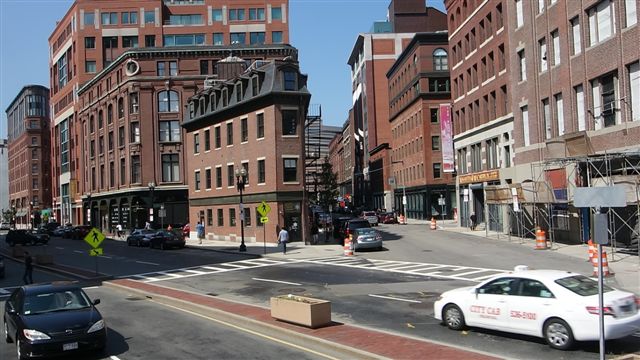 Rather a cute sight was this apartment building, situated on the smallest block – possibly in the world. 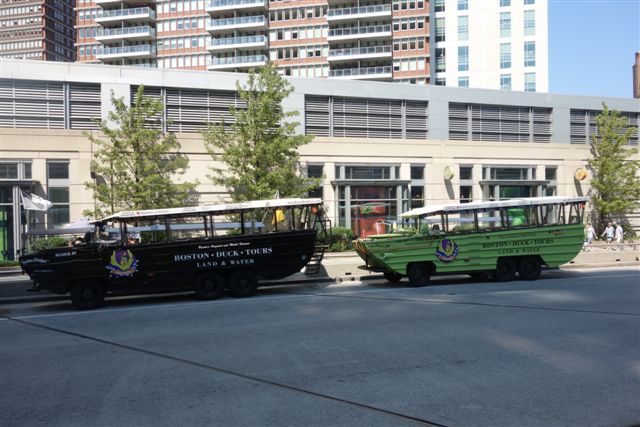 Queuing up for passengers were the Ducks which cross land and water. This was one of the complimentary side trips but we decided not to risk getting wet and opted for the Charles River tour instead. 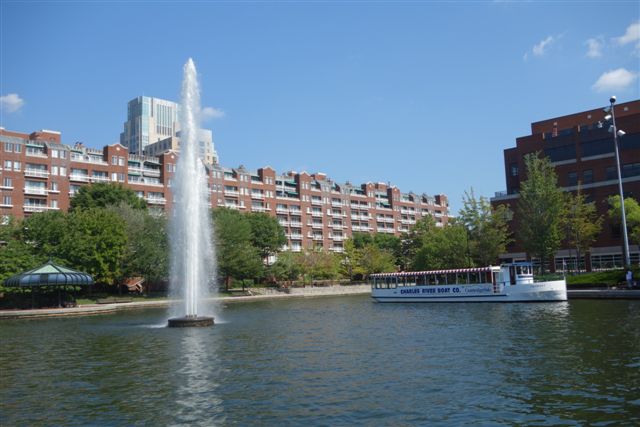 The narrator kept us well entertained for the whole trip, dispensed 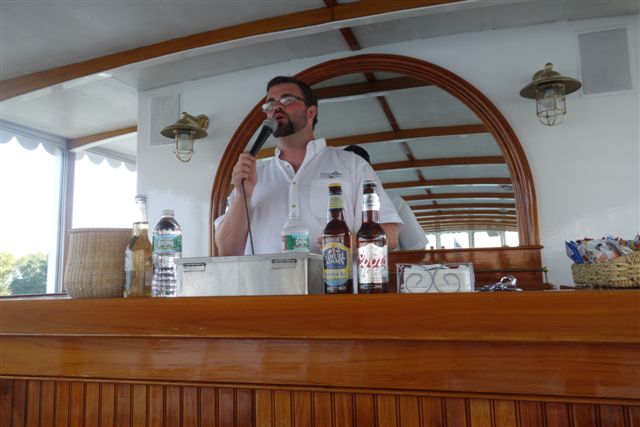 refreshments and helped the captain to secure the boat so that passengers could embark and disembark safely. Busy man!

Julie and Suzi loved the boat trip, all 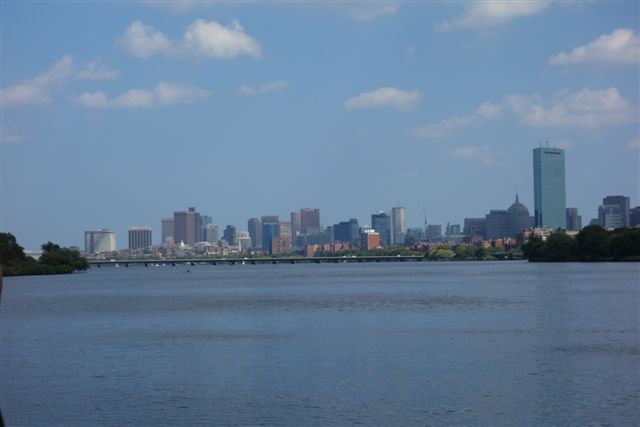 the amazing sights in the distance, and the people we passed enjoying their recreation with the local wild life! 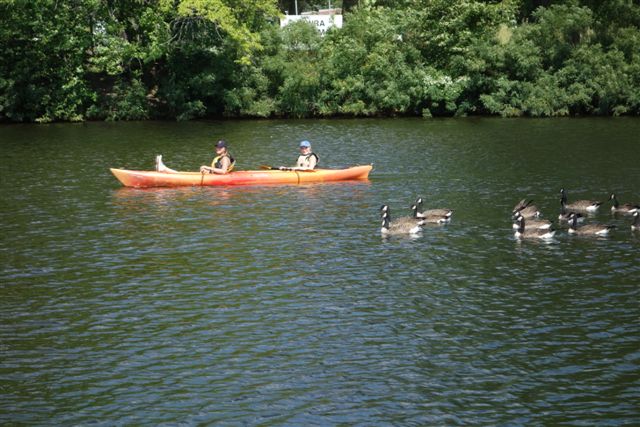 As we hadn’t started out very early it was very late when we finished and Boston was just coming alive with a special concert to mark the end of a weekend jazz concert. Tired as we were, we were quite glad to find our car and drive out of the city and back to our lovely, quiet hotel! We’d all found the history fascinating but none of us felt compelled to return in the future.