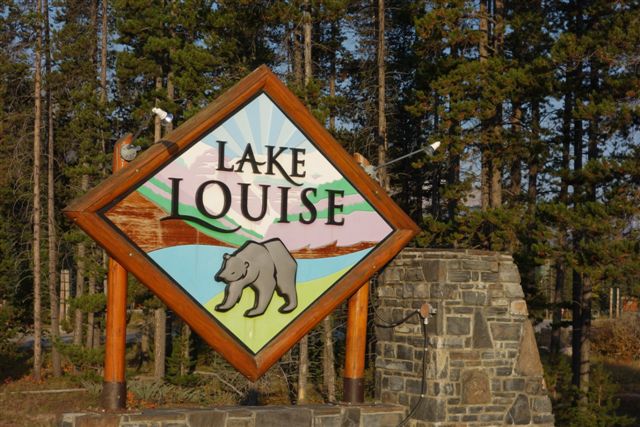 Yet another stunning day dawned and we set off early, glad that we were coming back to our hotel in Canmore for another night. Signs along the way suggested that we imagine arriving here in the 1880s … ‘the smell of pine forest, the sound of avalanches from the mountains above, and the wonder of vast unexplored country ahead’. The signs told us that these days, the ice-capped peaks, hidden valleys and turquoise lakes are as spectacular as they ever were, and are much easier to get to. 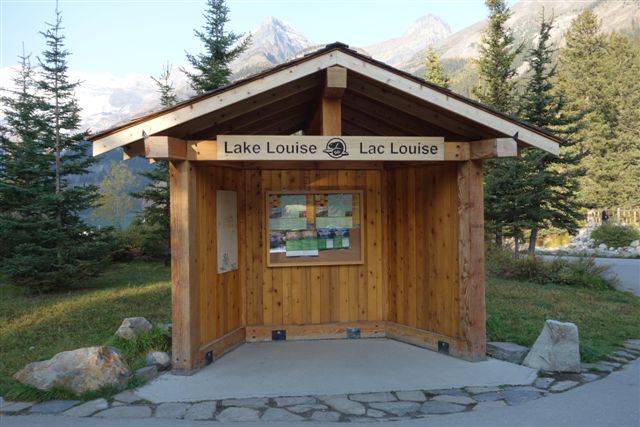 Early visitors came to Lake Louise by rail or on horseback until the road from Banff opened in the 1920s. Travellers in winter explored on snow shoes and in the 1930s the skiers arrived. The Lake Louise area has become a mecca for climbers, walkers and tourists, summer and winter. 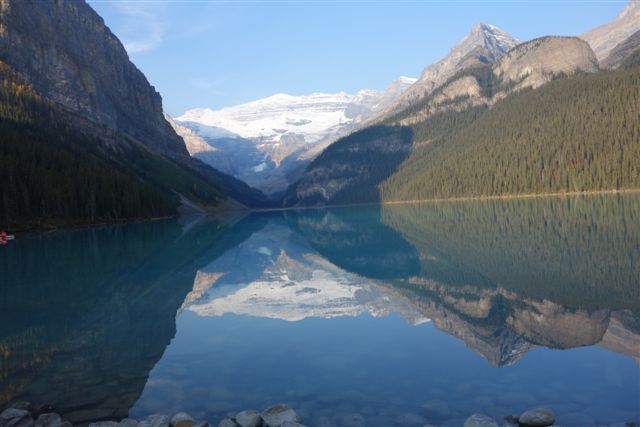 We were incredibly glad that we were early as busloads of (other) tourists arrived soon after us and filled the parking lot, spilling out with their cameras to take up vantage spots. Many of them had very sophisticated apparatus with tripods and took the pastime very seriously. Lake Louise is the most famous glacial lake in the Canadian Rockies and one of the most beautiful in the western hemisphere. The lake, named for Princess Louise Caroline Alberta, daughter of Queen Victoria, is 1,730m above sea level. 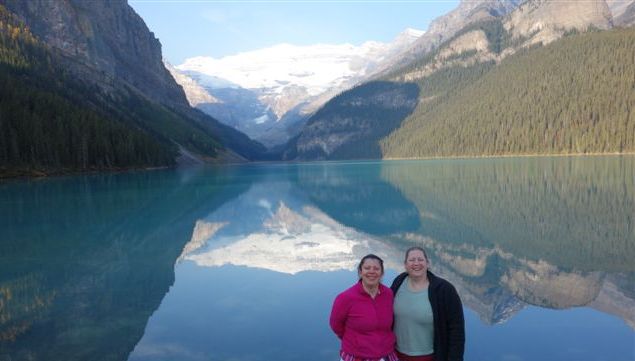 When we arrived (before the buses began to arrive) there was absolutely no wind and the lake was a mirror. Of course we took hundreds of photos! 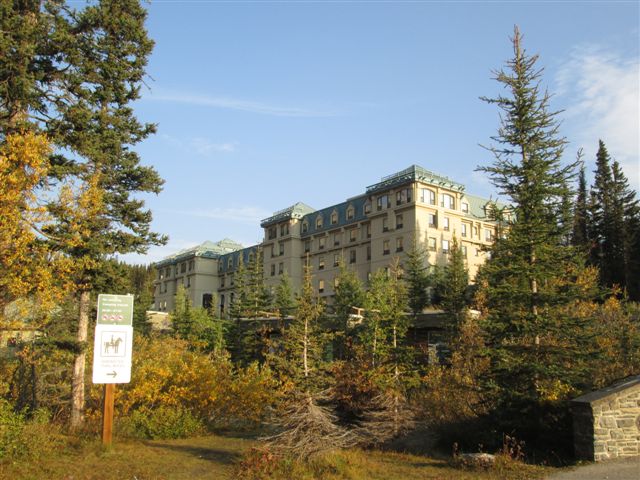 Incredibly aqua in summer and glistening with snow and ice in the winter, the Lake has been the subject of countless photographs – not just ours! Viewed from the hotel side of the lake, the milky blue water creates a striking foreground framed by steep, densely forested mountains on either side and, at the far end, by the rocky bulk of Mount Victoria blanketed by a sparkling layer of glacier ice. It’s 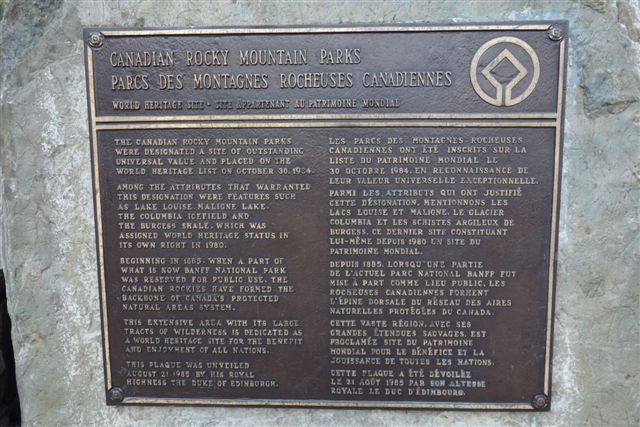 the grinding of this ice against the mountain that creates the fine rock particles that wash down into the lake, giving its unusual blue colour – which makes it very easy to photograph.

There were signs everywhere, exhorting tourists to enjoy the beauty while being very respectful towards the wildlife. 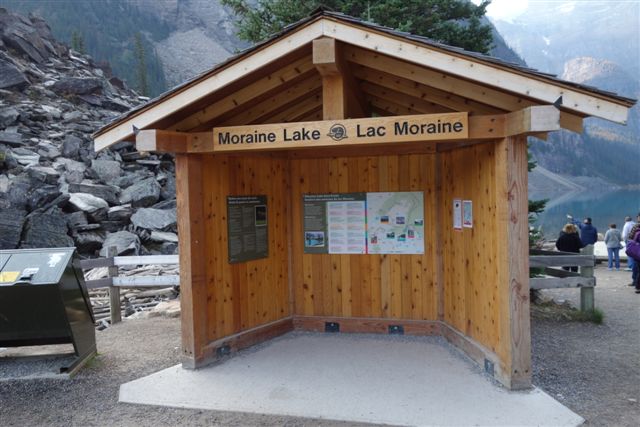 We had a comprehensive plan for our day so moved on to the next lake on our schedule, Moraine Lake.

Although roughly half the size of Lake Louise many believe the blue-green Moraine Lake is equally beautiful. We actually thought it was 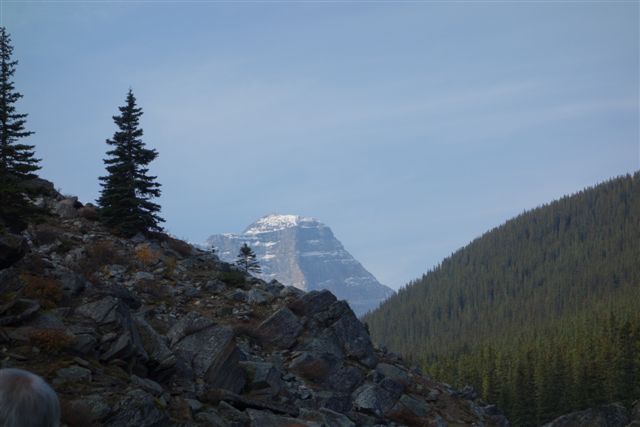 even more beautiful. Known as the ‘Jewel of the Rockies’ the lake is in the Valley of the Ten Peaks which provides the ten saw-toothed ridges that rise dramatically from the lake shore – peaks such as the one in this photo. It is also quite famous because an image of the Valley of the ten peaks surrounding the lake appeared on the back of the older versions of the Canadian $20 bill. 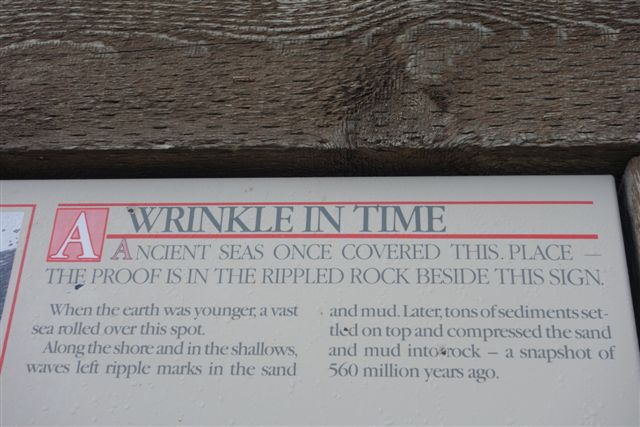 To get a good vantage point it was necessary to walk to the top of a very small ‘cliff’ overlooking the lake. Other travellers had encouraged us to make this climb and assured us that even the ‘halt and lame’ would be able to manage it, referring, of course, to Julie, very nearly recovered from her torn calf muscle, and me awaiting a possible second knee replacement when I get home! A sign on our way to the top told us that, when the earth was younger, a vast sea rolled over the spot on which we were standing. That gave us pause for thought.

But the ripple marks in the rock behind the sign bore this out. 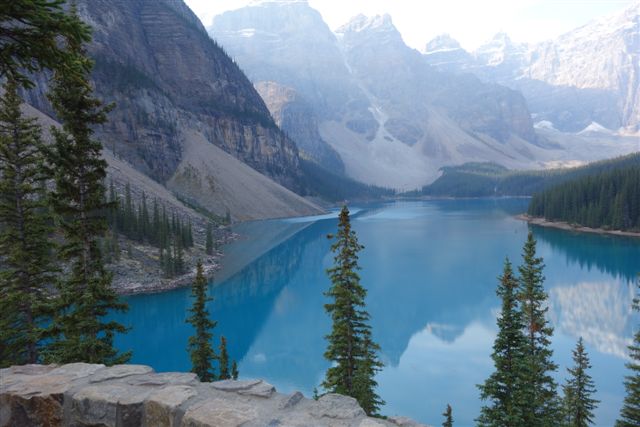 The scenery overlooking the lake was impressive in and of itself and we could only imagine what it would look like when the surrounding mountains are covered in snow!

The climb was worth it – the view of the lake from above was, indeed, breathtaking. 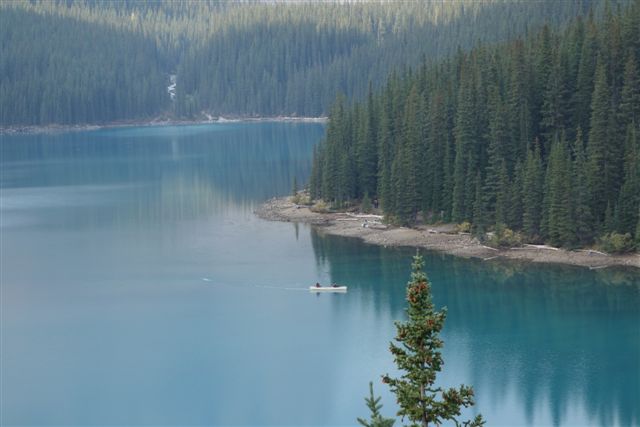 And it was good to see that visitors were not only enjoying its beauty but also kayaking across its peaceful surface. 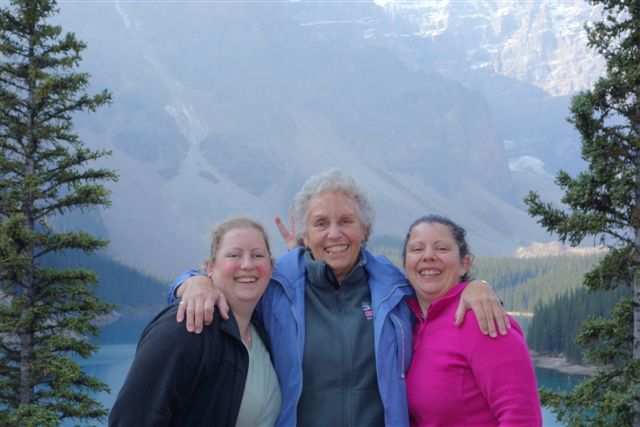 A kind tourist – one of those with very sophisticated apparatus – offered to take a photo of all three of us – and we thought she did a good job! 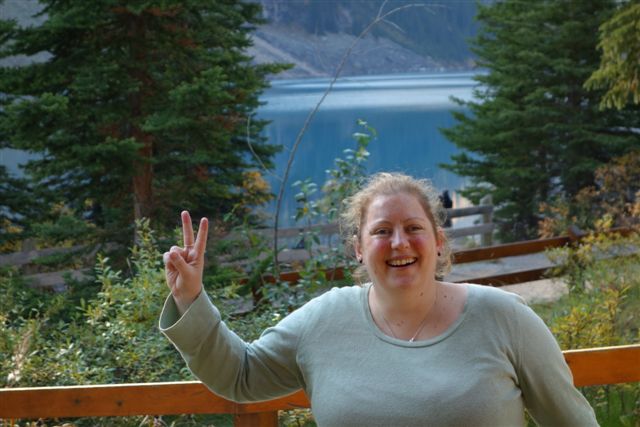 Moving along to the inevitable Gift Centre and café, we sat outside and enjoyed a cup of coffee with the lake behind us – or behind Suzi at any rate! 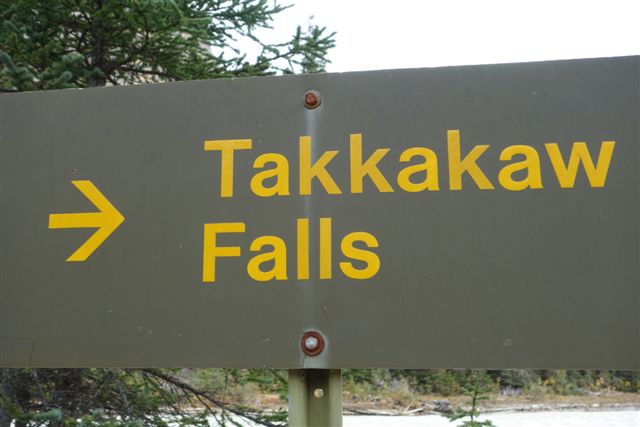 But not for long as there was so much to see. Like the Takkakaw Falls in Yoho national park in British Columbia. 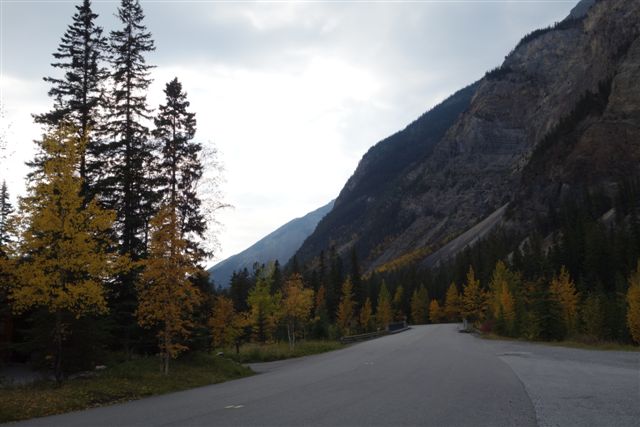 It was a fairly long and winding drive from Banff National Park across the famous Kicking Horse Pass (more about that later) to arrive in Yoho National Park up in the hills, but it was well worth it. Evidence of Fall was everywhere – lovely mixtures of yellow and green, with the occasional red tree, which enhanced the beauty of the surrounding area even more. 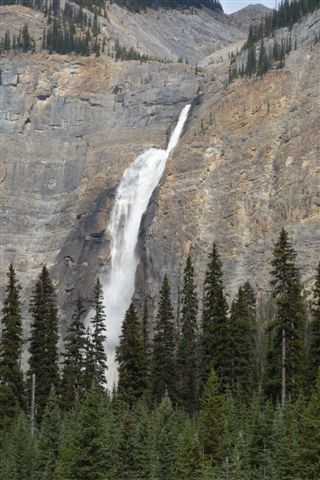 Like everything else we’d seen, the Falls were spectacular. 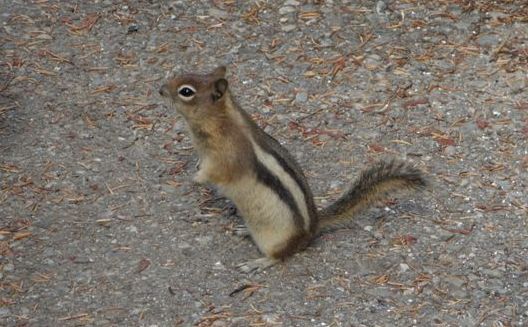 And while we were enjoying them, a little chipmunk started to play, almost at our feet. The Ranger said it was just as well we weren’t wearing our sandals because they’re very inquisitive. He was a very adventurous little 'fella', not scared of us at all and he was very cute and humerous to watch as he scurried about. 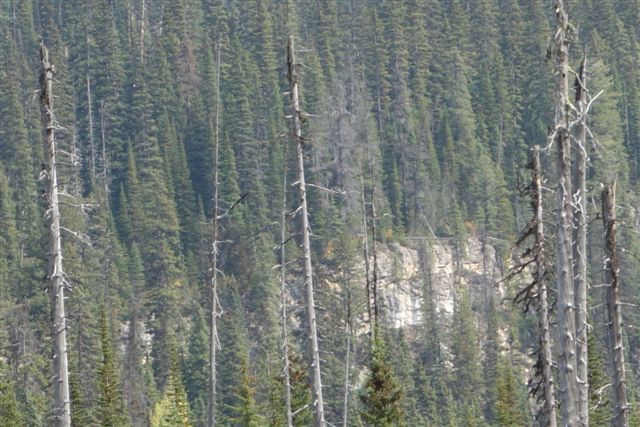 There’s a phenomenon happening with the pine trees, which we’d noticed in Yellowstone but which is also very evident here in Canada. We asked one of the Rangers about it and he told us that the pine trees are being attacked by pine beetles. These beetles attack the bark of the tree and the tree begins to die. It takes four years to kill the trees and they go red while it’s happening. But when they’re dead, they’re very dead indeed. And they look as if they suffer real pain while they’re in the death throes – which I found very upsetting. There’ll be more evidence of this in later blogs and photos. Perish the thought that one of these beetles should make its way to New Zealand. The only thing that appears to halt their reign of terror is temperatures of at least minus 40 degrees for several days on end – and Canada has not experienced these low temperatures for the last few years. 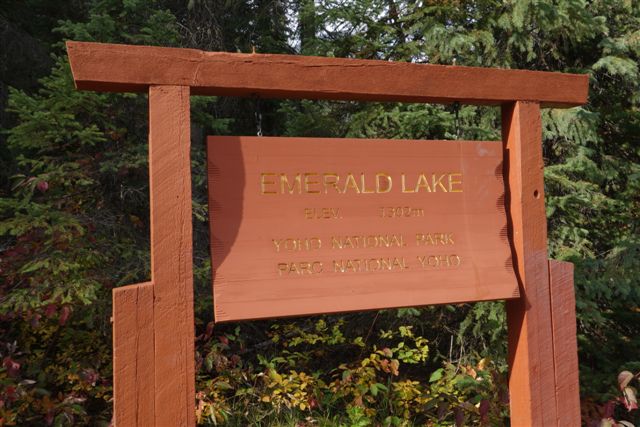 Coming down from the Takkakaw Falls we made our way to Emerald Lake, always on the lookout for a sight of a BEAR! But, alas, this was another bear-less day. 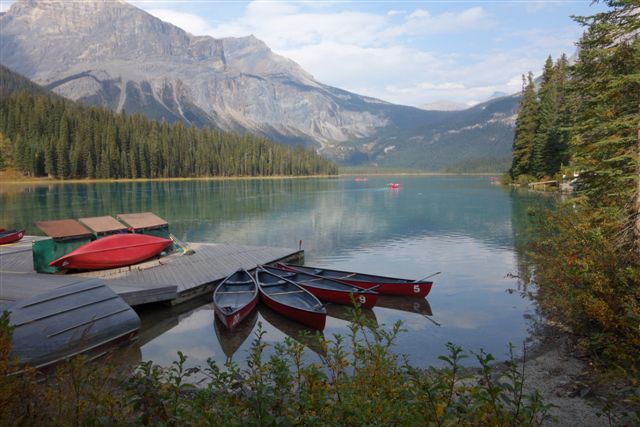 Despite the appearance in this photo, the banks of the lake were teeming with people and it was clearly another popular tourist attraction. We enjoyed the views and also had time to chat to people about what they had experienced that day in and around the beautiful lake and surrounding glaciers.

Beginning to make our way back to Canmore we turned our attention to the railway. We’d heard about an awe-inspiring engineering feat which changed the original gradient down Kicking Horse Pass, a high mountain pass across the Continental Divide of the Americas of the Canadian Rockies on the Albert/British Columbia border and lying within Yoho and 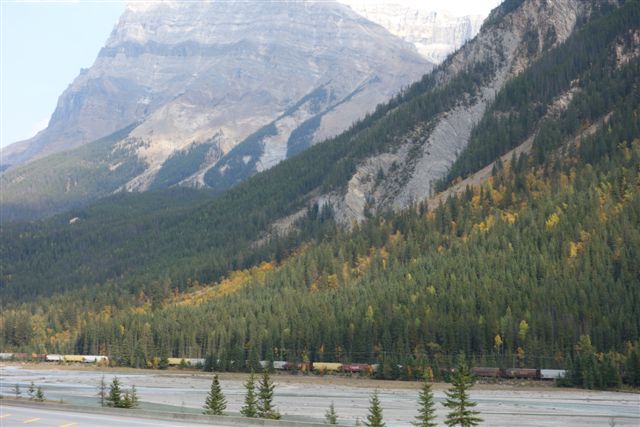 Banff National Parks. We were told that freight trains are so long that they need at least two engines at the front and one or two at the back and that some even need another engine in the middle. It was impossible to take a photo of a whole freight train but we did manage to take a photo of just a few carriages! The trains are so long that it’s possible to see the rear end of a train going into a tunnel while the front engine of the same train is exiting out of a tunnel lower down the mountainside. 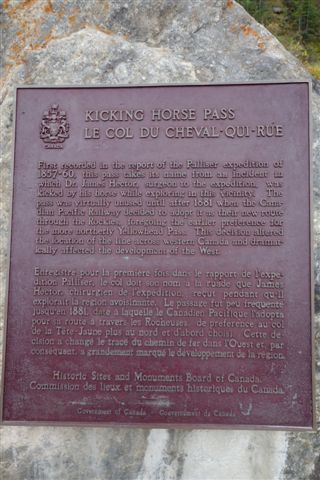 The phenomenon that we were keen to investigate was the engineering feat involved with the construction of the well-known ‘Spiral Tunnels’. The pass was first explored by Europeans in 1858 by the Palliser Expedition led by Captain John Palliser. The pass and the adjacent Kicking Horse River were given their names after James Hector, a naturalist, geologist and surgeon who was a member of the expedition was kicked in the chest by his horse while exploring the region as this plaque explains. Fortunately he recovered. 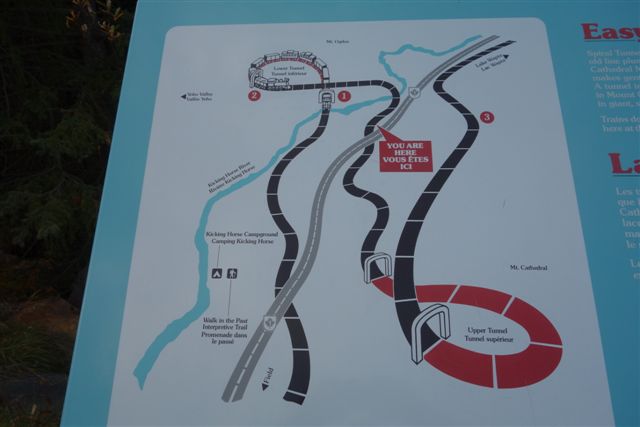 This plan shows the two spirals that were constructed to reduce the gradient. The original route of the CPR between the summit of the pass near Wapta Lake and Field was known as “The Big Hill”. It had a ruling gradient of 4.5% (1in23) and was the steepest stretch of main-line railroad in North America.

Owing to frequent accidents and expensive helper engines associated with railroading in the pass, the CPR opened a pair of Spiral Tunnels in 1909 that replaced the direct route. 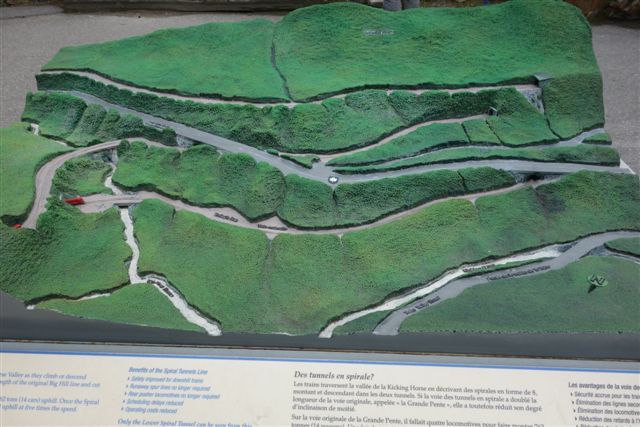 Although these tunnels add several kilometres to the route, the ruling gradient was reduced to a more manageable 2.2% (1in46).

The Trans-Canada Highway was also constructed through the pass in 1962, essentially following the original CPR route. It reaches its highest point at the Kicking Horse Pass with 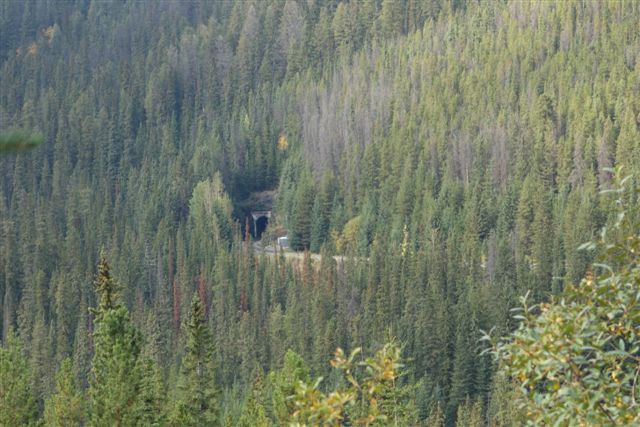 an elevation of 1,643 metres. It’s possible to catch frequent glimpses of the railway from the Highway. This model helped us to understand how the spirals worked – although Suzi had to explain it to me several times!

This was one entrance to the tunnels. 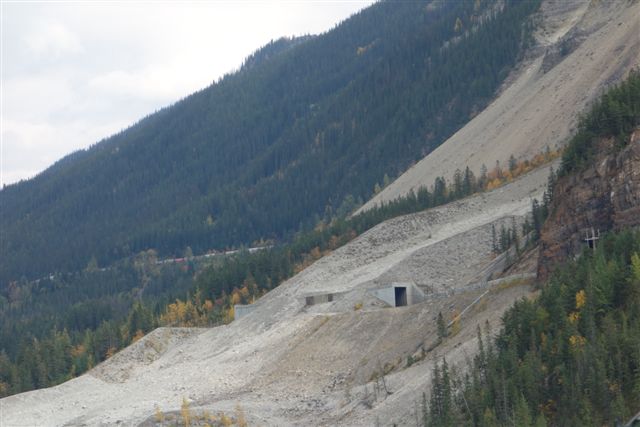 And this was another.

These are the tunnels that were constructed in Kicking Horse Pass. A National Historic site, the Pass is of historical significance because the main line of the Canadian Pacific Railway (CPR) was constructed between Lake Louise, Alberta and Field, British Columbia, using this route in the 1880s in preference to the originally planned route through the more northerly Yellow head Pass.

Banff AB and Yoho National Parks BC, Canada – 22 September 2014
+ Text Size -
Do NOT follow this link or you will be banned from the site! Original generation time 2.3713 seconds.