It was a very long flight from Singapore to London. Having lost four hours between New Zealand and Singapore, I lost another seven on this flight. After an overnight journey with almost no sleep, I arrived at East Putney tube station having been travelling for seventeen hours. I'd been sitting still for a very long time and it was a lovely day so I decided to walk to Gill's house, trundling my case along behind me - a distance of about 20 minutes. However, my poor brain was so tired that I turned left instead of right. Fifteen minutes later I was completely lost so I just turned round and walked back to the tube station, hoping I could hail a taxi. To add insult to injury, the battery on my phone was almost dead - a bit like me really! 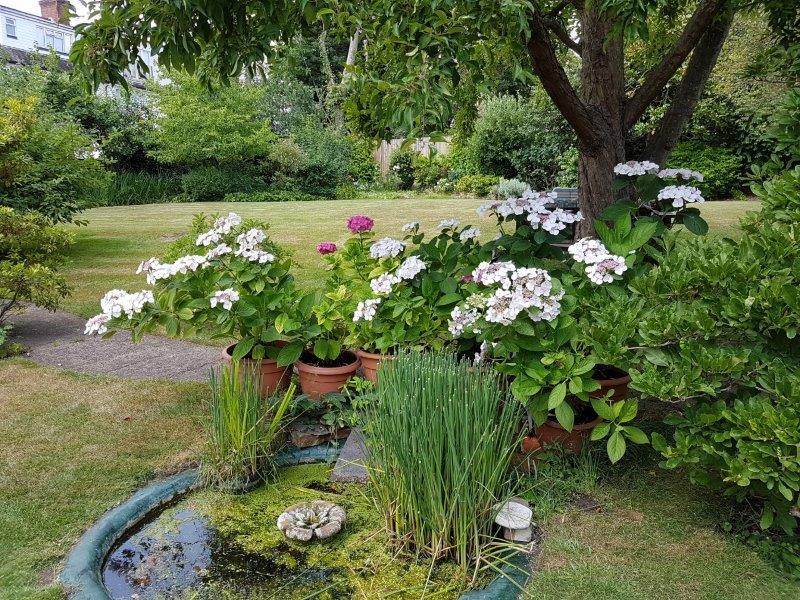 Experiencing no luck with the taxi hailing endeavours. I walked into a Costa Cafe nearby, armed with my phone and charging cable and asked if they had a usb port at which I could charge my phone. They very kindly found one, so, before I ordered a coffee, I plugged in and rang Gill to let her know why I hadn't arrived. To my enormous relief, she told me to stand in front of the station and she'd be there to sweep me up. At this point I hadn't even ordered a coffee and I felt slightly embarrassed disconnecting my phone, returning the charger and sloping out of the cafe without buying anything. I hadn't wanted to trouble her but I was too tired to argue and was only too glad to reach her home and relax in her beautiful garden.

It turned out to be a very auspicious time to be in London although I didn't know this would be the case when I arranged my holiday. It was the second week of Wimbledon and I spent the whole week within hearing distance of the roars of the crowd just a couple of miles away at the All England Club. England had just got through the quarter finals of the World Soccer tournament, played and lost against Croatia in the semis on Wednesday and sadly played and lost against Belgium in the playoff for third/fourth place on Saturday. London was at fever pitch! And on a totally different note, the divisive Donald Trump arrived in London, reporting of which took up far too much space in newspapers and far too much air time on television and radio. It was very weird to be so close to this event, especially on the second morning when his helicopter entourage flew right over Gill's house and we found ourselves rushing out onto the lawn to gawp like schoolchildren!

What more could I possibly want?

As it turned out, there was more to life than most of this. My tennis idol, Roger Federer was beaten in the quarter finals of the men's singles on Wednesday by Kevin Anderson although it was fair to say that Federer didn't lose so much as Kevin won. It was a magnificent match and I noticed that my 'resting' heart rate soared from a normal of something below 60 to something over 80 for much of the match. Other games gave pleasure although it never seems to hold the same magic as watching Federer play!

As for Trump's visit, well what can I say? Protesters did justice to much of the feeling running through the veins of English nationals and the very many non English nationals living in England. The people I spoke to were appalled at his complete lack of manners - 'not at all British! - and our little party lost interest very quickly. It would have been hard for him not to have noticed that his presence wasn't welcome to many and he seemed impervious to it, telling the media how much everyone loves him. As they say in New Zealand, 'yeah right!'

But the real value of my first week in London came in so many other ways. 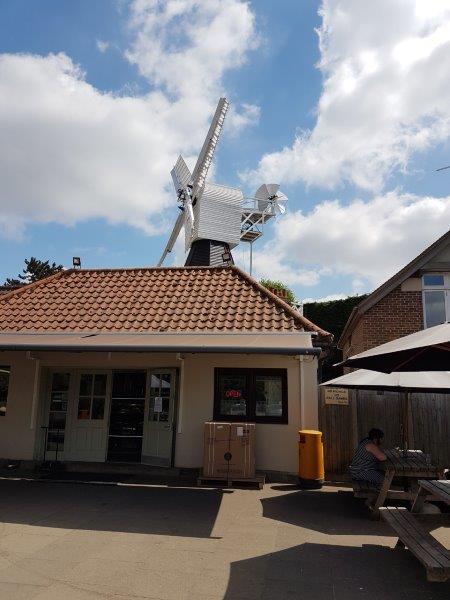 My brother lives near Gill and picked me up to take me for a bit of an outing through beautiful places like Richmond Park where the speed limit is 20 mph, allowing time to enjoy the surroundings, coupled with lunch in a little restaurant on Wimbledon common - a dog's paradise. Overshadowing the restaurant was a rather lovely windmill but I don't think it moved - just sat there quietly and looked lovely. 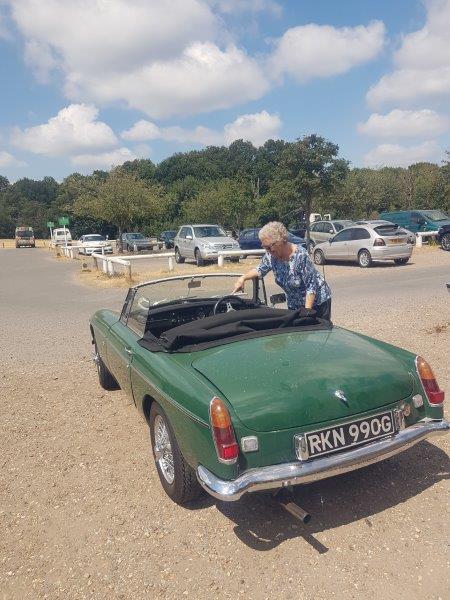 It was a balmy summer's day, not too hot and with a light breeze, so we were able to sit outside and I admired this lovely old MGB in the car park, reminiscent of the identical model I owned in the 1960s although a different colour.

Tony and I haven't seen each other for over three years so there was heaps of catching up to do and lots of world events to toss around. One of these was Brexit as this is a hot topic in England at the moment with many of the Government's senior advisers jumping ship - people like Boris Johnston. We both agreed that quite a bit of water has got to flow under the bridge and quite a bit of time has to pass before anyone will really know how it will all turn out, and it does appear to have met some fairly major stumbling blocks at the moment. 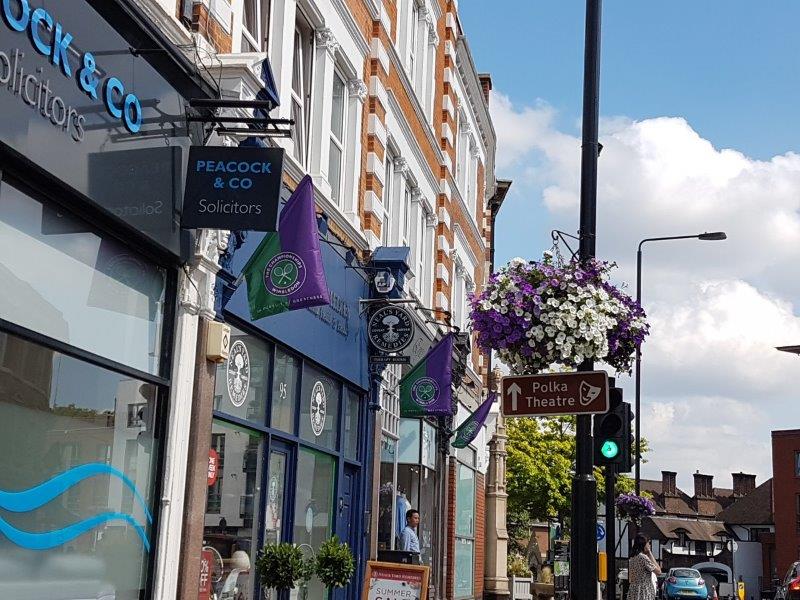 All too soon our time together came to an end and he drove me home through the picturesque Wimbledon Village where I was enchanted to see that the hanging baskets, ubiquitous in English villages, had been planted with purple and green flowers to match the colours of the All England Club and also matched the flags that were 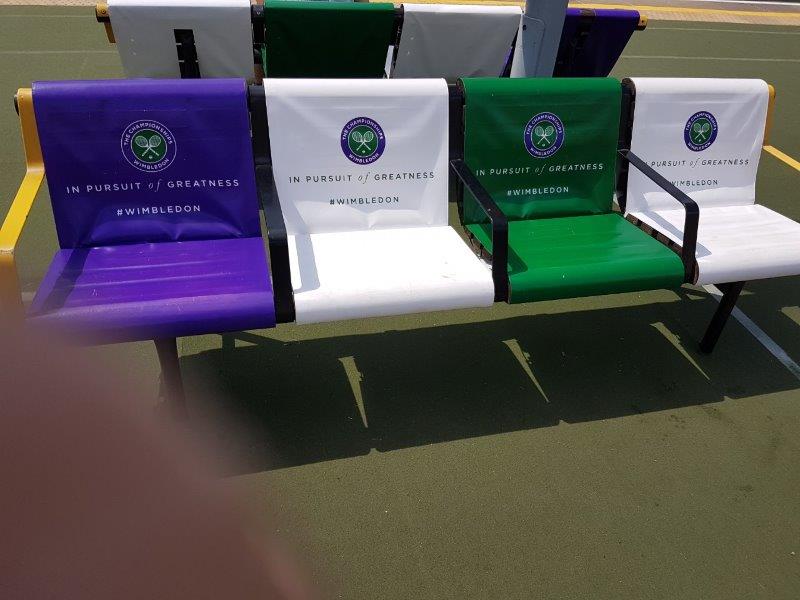 hanging from all the shop fronts! Interestingly, all the benches on the platforms in the nearby tube stations were also sporting the Wimbledon regalia.

After a couple of days it was time for the arrival of the 1960 Sherborne tennis team. Some of us have been meeting during Wimbledon for years and the time-honoured tradition is always fun. Unhappily two of our number weren't well enough to come but Gill, Bubs and I kept in daily contact with those who couldn't be there to 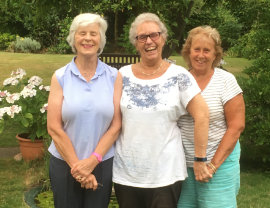 check on them and meanwhile enjoyed each other, the tennis, the wonderful food and hospitality, the glorious weather and the great pleasure of still being able to meet and spend time with each other. Unfortunately the photo was a bit blurred and may have reflected our somewhat blurred condition but is a great reminder to me of our few days together. 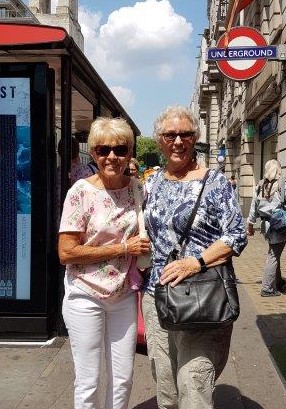 Before I left Gill there was just one day left to meet a good friend who had come out to stay just over a year ago. Linda travelled in to London from Bedford so that we could snatch a quick lunch at The Landmark Hotel in Marylebone, an old hotel with great traditions and an oasis in which to catch up while the noise of London went on unabated on the streets outside. Another great catch up, another opportunity to enjoy the cuisines of London - this time Cumberland lamb! - and then it was back to the tennis and the thrilling final and first grand slam win for Angelique Kerber against Serena Williams.

All good things must come to an end and on Sunday morning I travelled from Southfields to Marylebone and caught a train to Banbury in Oxfordshire.