Fortunately for us, Sandra had a breakfast meeting which meant she had to leave at 7.15. This was just the spur we needed to make an early start. After some very sad farewells and thanks for her wonderful hospitality, we were on the road in good time. 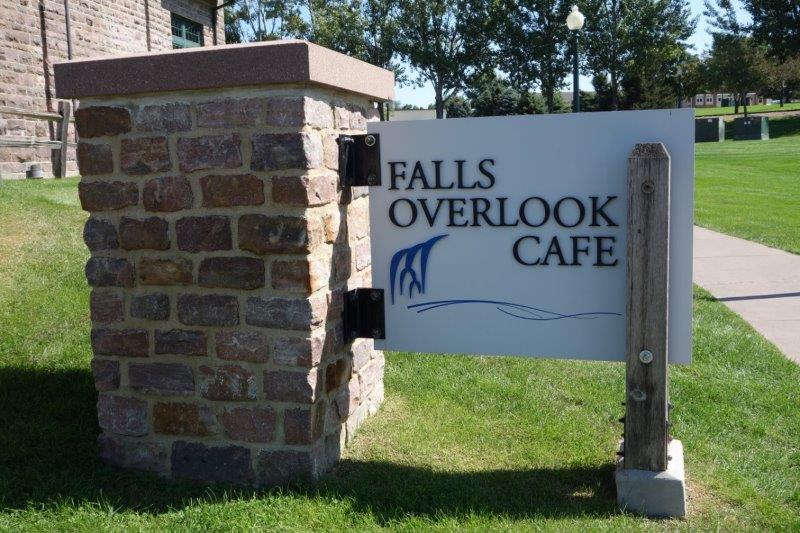 We planned to drive to Sioux Falls, a distance of 230 miles which we expected would take us 4 hours. And it did. And it had a lovely face overlooking much of the Park. 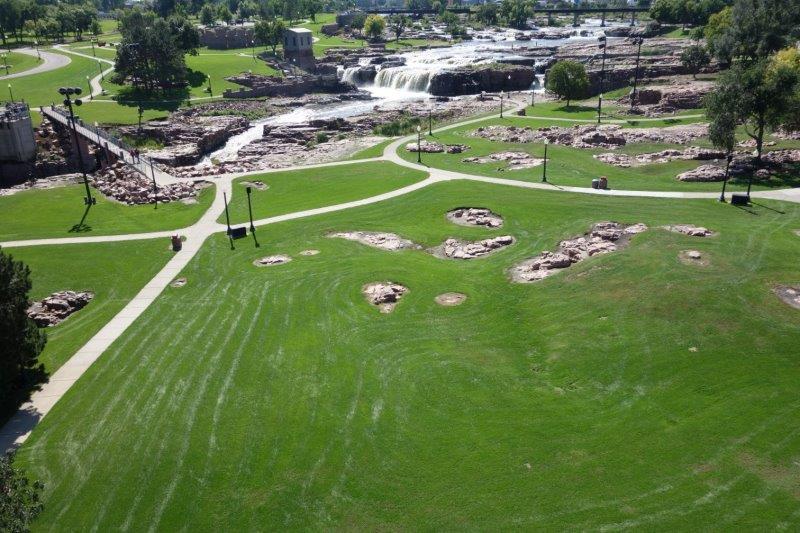 The history of Sioux Falls revolves around the cascades of the Big Sioux River. The falls were created about 14,000 years ago during the last ice age. 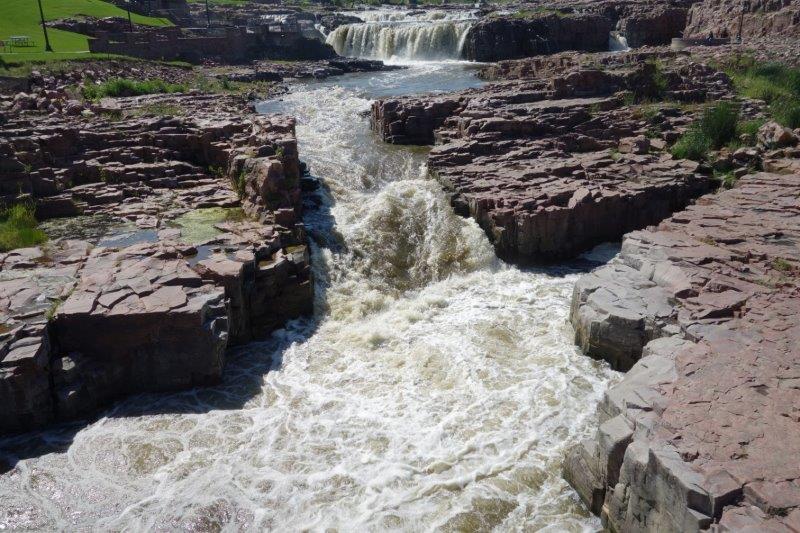 Many tribes of Native American people inhabited the region prior to the arrival of European descendants. They maintained an agricultural society with fortified villages on many of the same sites that were previously settled. Many indigenous Americans live in Sioux Falls today.

The arrival of the railroads ushered in the great Dakota Boom decade of the 1880s. The population of Sioux Falls mushroomed from 2,164 in 1880 to 10,167 at the close of the decade. But a severe plague of grasshoppers (can you believe it?) and a national depression halted the boom. Prosperity eventually returned with the opening of a meat packing plant in 1909, the establishment of an airbase and a military radio and communications training school in 1942 and the completion of the interstate highways in the early 1960s. It’s certainly a beautiful place. 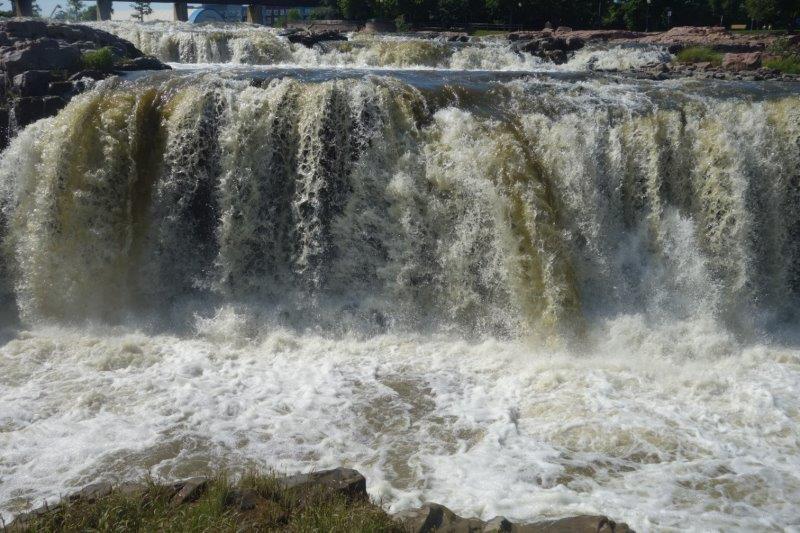 The Falls were at the heart of the young city of Sioux Falls, nicknamed the Queen City. The Queen Bee Mill stood at the most powerful point of the Falls and was a centre of activity in the 1880s. 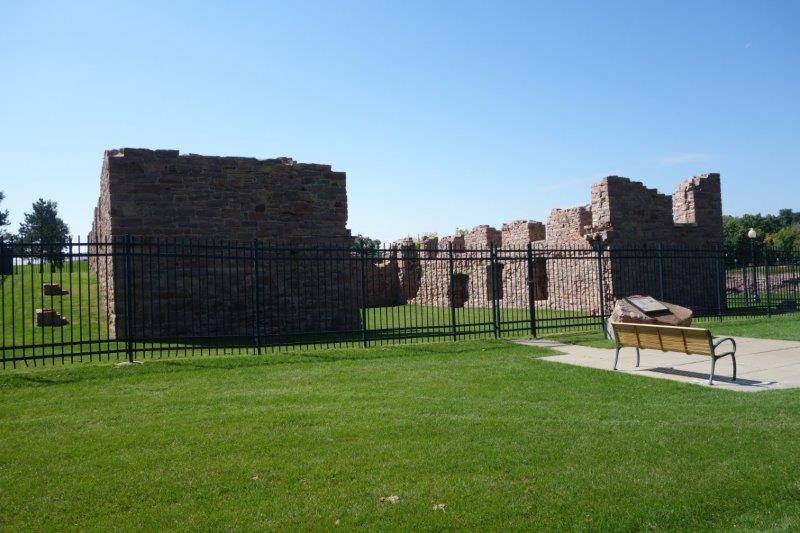 The Queen Bee Mill was sited to take full advantage of the power produced by the Falls. The Mill was unusually large and its equipment was the most advanced available. It was equipped to produce 1,200 barrels of flour a day which was about four times the amount made by a typical Midwest flour mill.

Producing this much flour required a large, reliable supply of water and wheat. Usually there was too little water (hard to believe considering the volume of water we witnessed) and too little wheat so the Queen Bee Mill never made the amount of flour expected. It closed after two years of operation. The Mill re-sold several times to investors who believed that the Mill could be operated profitably. Most owners abandoned their plans before even re-opening the Mill. The building burned in 1956, leaving only a charred shell. 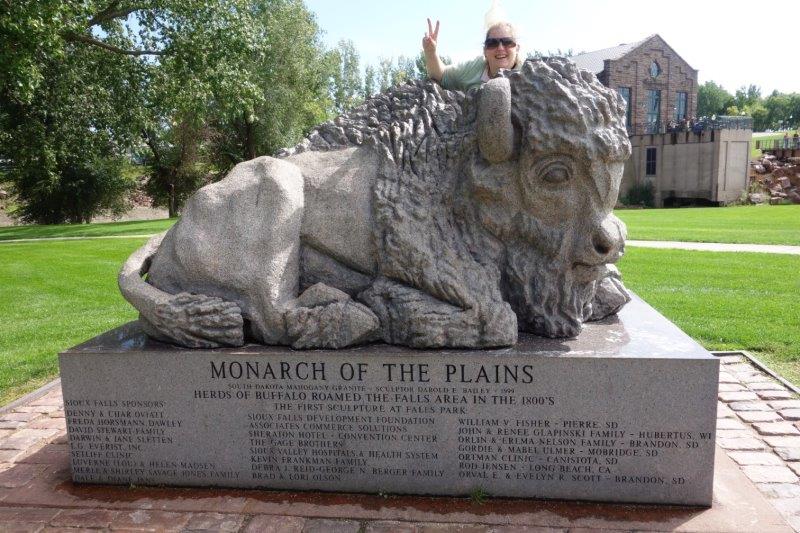 One of Suzi’s ambitions is to see a bison before our trip comes to an end. But just in case this doesn’t happen, we thought it might be a good idea if she posed beside this rather beautiful statue – just in case …

From here we had another 350 miles to drive to Rapid City which took a further 5 hours. It was a long day of driving but the roads were good and we arrived in time to enjoy a good night’s sleep.