We set off early today for what turned out to be a excursion although I don’t think that’s what was intended when we left. 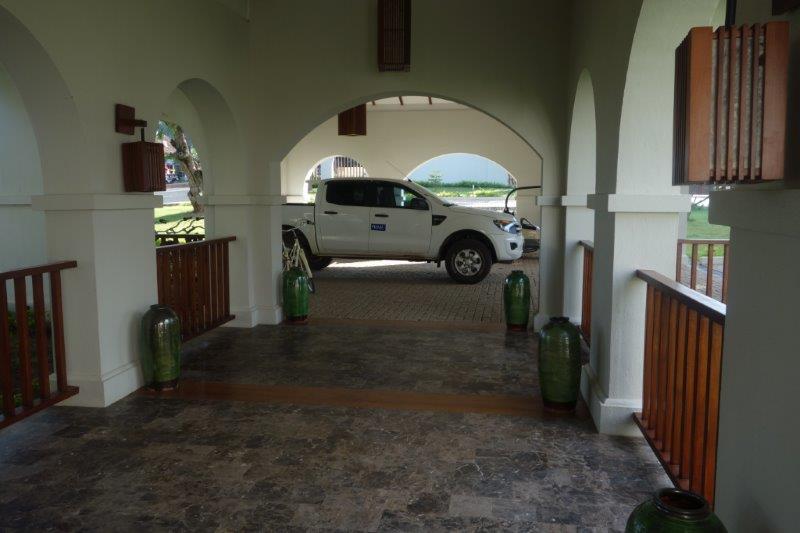 There was just so much to see. We were met by the PRIME driver at the hotel entrance at 7.15 am!

Nearly all the roads I’ve encountered in Myanmar so far have resembled the road we lived on in Pauatahanui for our first 30 years in New Zealand. Tar sealed (on the whole) but only just wide enough for two vehicles to pass if both move very close to the edge (and sometimes drift off onto the hard shoulder). 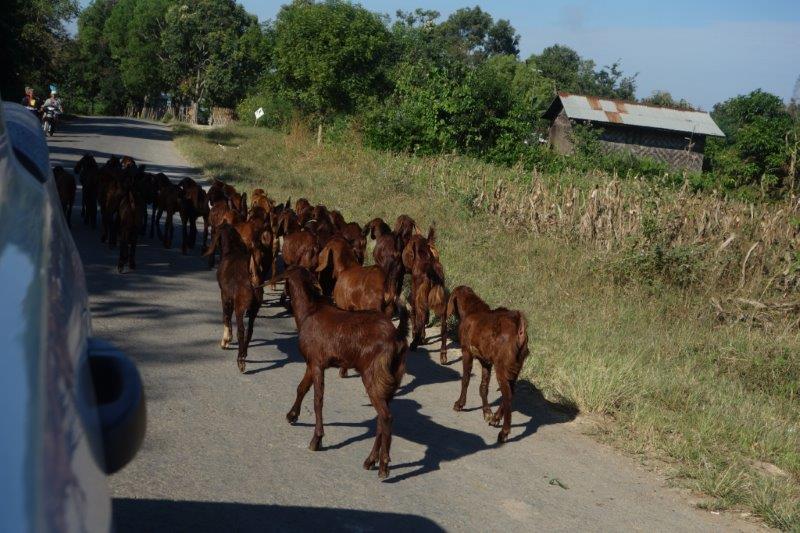 And of course, we passed the usual herds of livestock. On this journey, long-legged brown goats, a fairly large herd of the cattle I’ve seen more often than any other animal, wherever I’ve been. These Brahman cattle are a breed of Zebu cattle that were first bred in the United States from cattle breeds 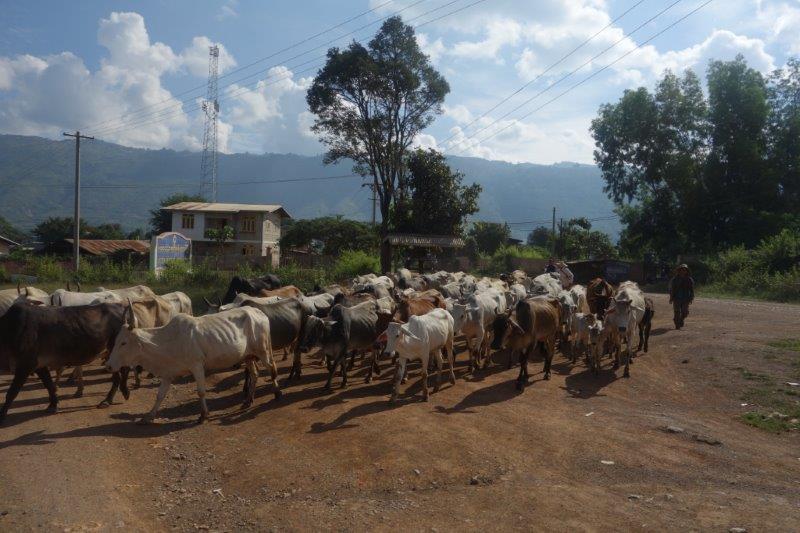 imported from India. Brahman cattle are known for their extreme tolerance to heat and are widespread in tropical regions. They are resistant to insects due to their thick skin. They live longer than many other breeds, often producing calves at ages 15 and older. I find them very attractive and most of the animals 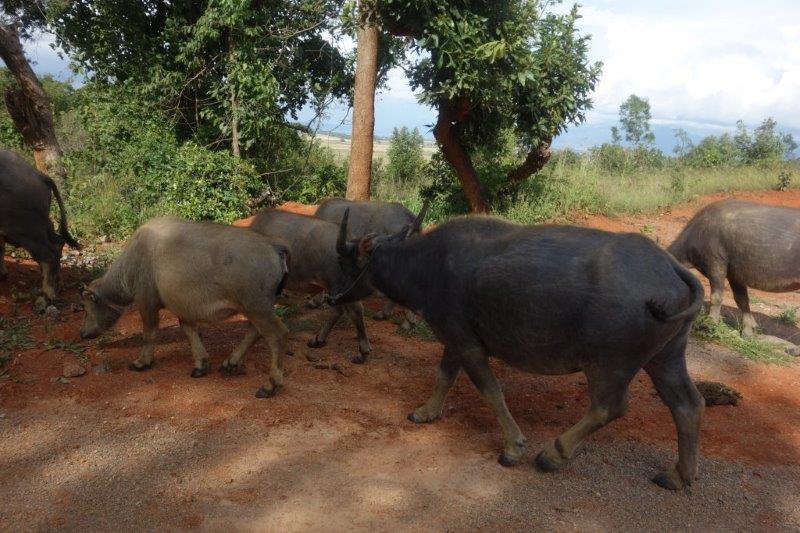 we saw were in very good order – a good thing considering how hard they work. And a handful of water buffalo. 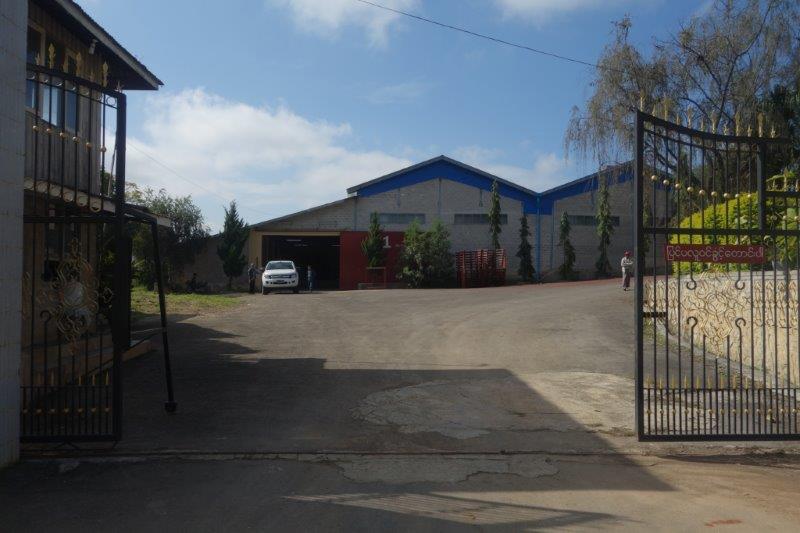 First of we went to Prime’s cold unit in the Ayetayar industry zone of Taunggyi, capital of Shan state and about 90 minutes north of our hotel. Adam’s team had been responsible for setting up the electrical equipment and he was very interested to see how it was all working to keep the potato seeds at the right temperature. 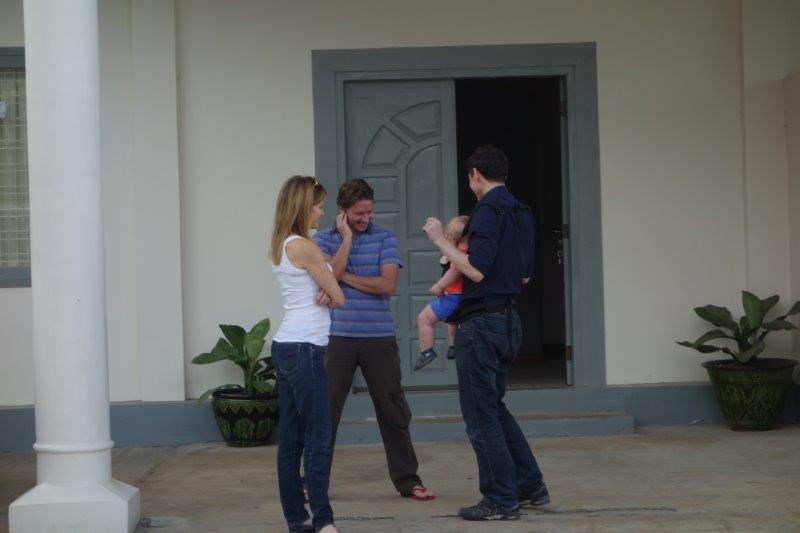 Then we went on to the Taunggyi office and met up with Daniel who’s got a big role in PRIME’s .

Taunggyi was established as a key in the when Sir J George Scott had the state's administration moved there. It’s the present capital of Shan State.

Once a year, to coincide with the Tazaungmon (November) full-moon festival, the famous hot air balloon festival is held in Taunggyi. Tens of thousands of people come from all over Myanmar to watch, as they do on Inle Lake. The Thadingyut and Tazaungmon full-moon festivals are held throughout South East Asia in of Lord Buddha and to commemorate his return form Tarwateintha heaven, when he was accompanied by a large number of heavenly beings who lit the way for him. The festivals of light, these heavenly lights, reach their climax with the long night of the candles at the Tazaungmon full when the monks are given new robes and provisions. we missed the hot air balloon festival but we enjoyed our own version of the festival of candles on the Road to Mandalay as you’ll have seen in a previous post. 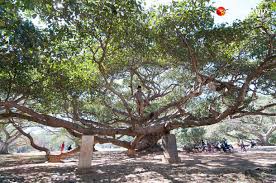 Daniel suggested that we visit PRIME’s farm in Banyan, too small to find on the map but named after the famous Banyan tree, here with its huge branches being supported. This tree is protected in Myanmar.

We set off south-east straight away. I hadn’t appreciated just how far it is from Taunggyi to Banyan, especially as the last 20 km or so are unsealed and very bumpy. Little Cameron did very well but it was a long way in and an equally long way out again for all of us! 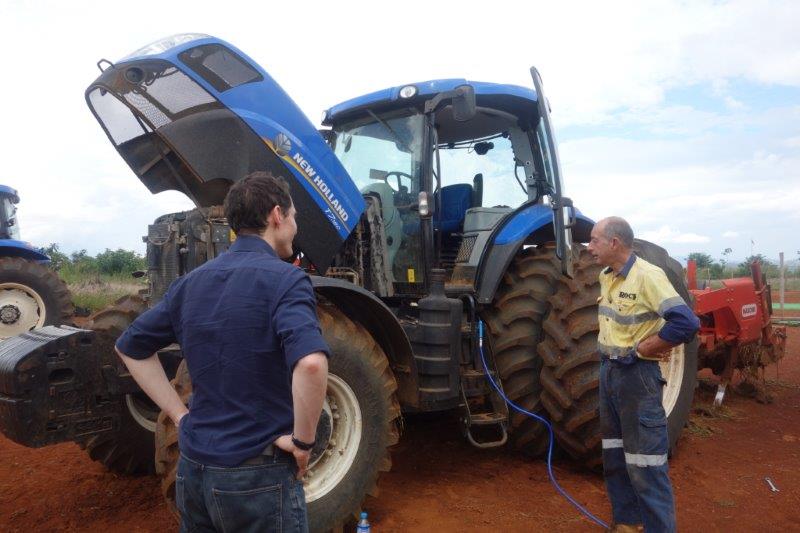 PRIME is currently involved with preparing some land in time for planting out a potato crop and Adam met up with Kevin who was bemoaning the fact that his equipment was giving him a bit of trouble and holding up the day’s . 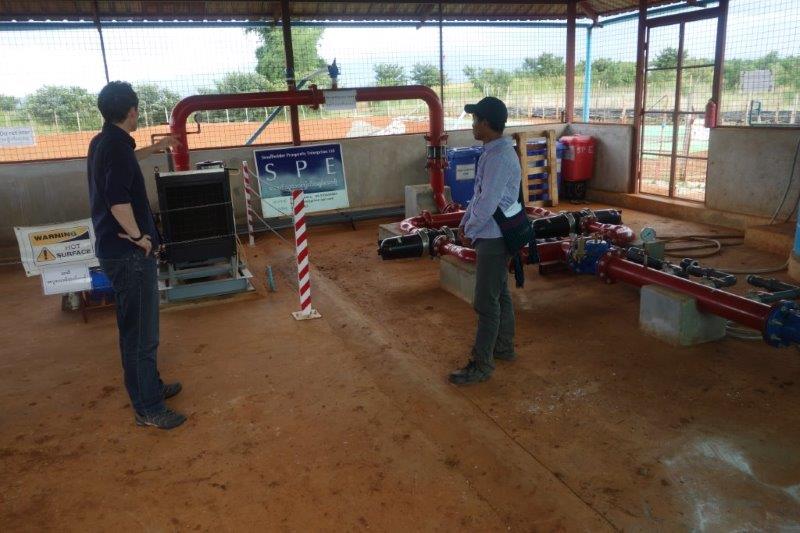 Meanwhile, there was time to check out the irrigation system which has been put drip irrigate the 50 acres of land in conjunction with Smallholder Prosperity Enterprises Limited to help small farmers in the area to be more efficient and profitable. This equipment was working well! 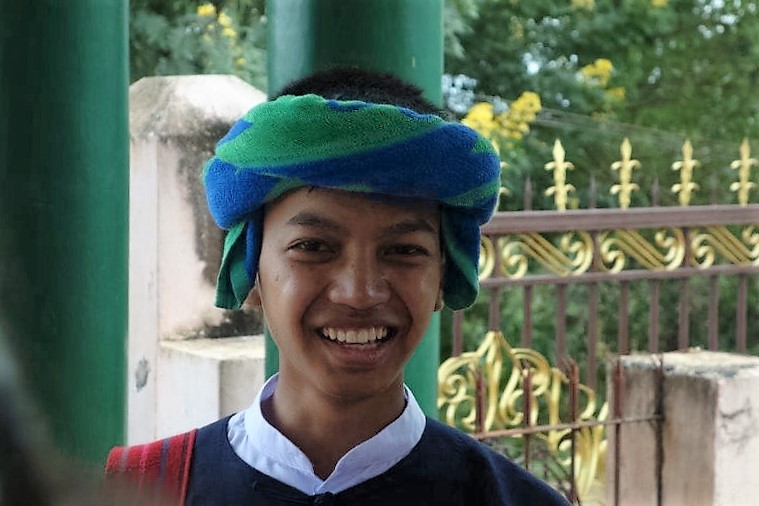 Back on the bumpy road to return to the hotel, we passed the pagoda area of Kakku (also known as Kekku) which lies just 40 km south of Taunggyi. Kakku is a religious of Pa-O people, who all wear this distinctive headgear. 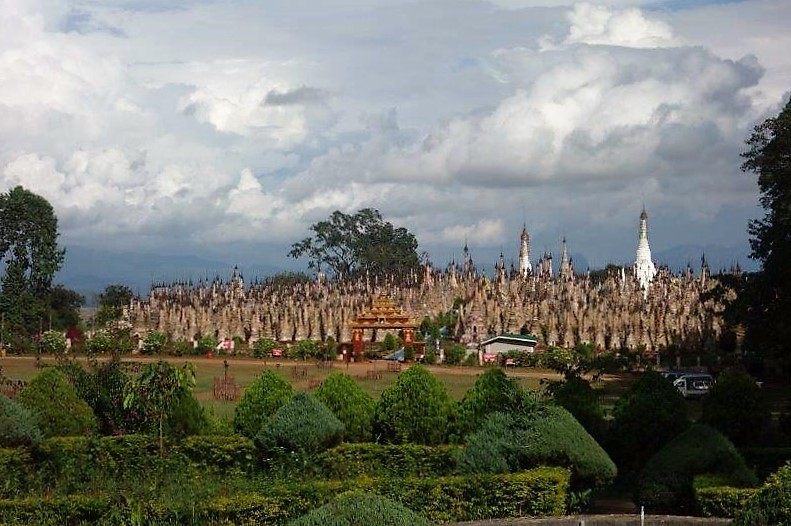 Kakku itself covers an area of about one square km and contains more than 2,500 stupas, which represent the Buddha's footprint. 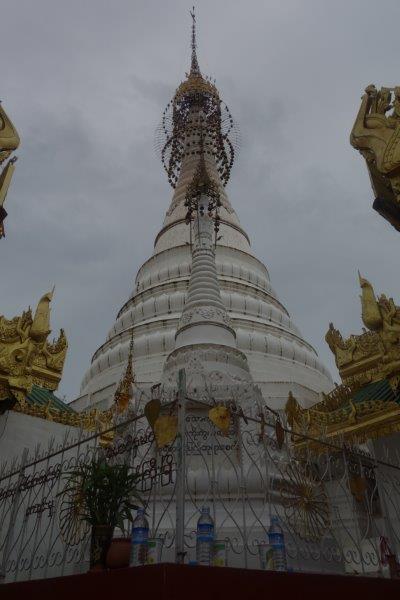 Most of these pagodas are thought to date back to the 16th century although many more had been added over the centuries. 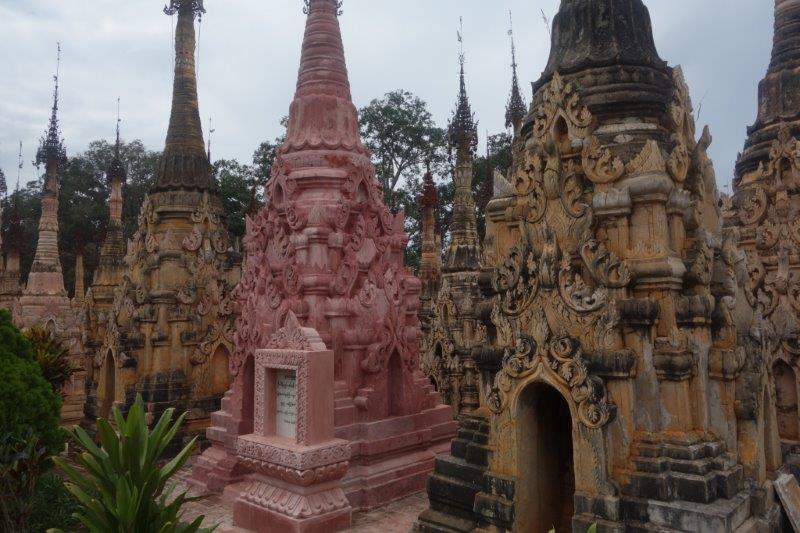 Nobody knows the exact origin of this forest of pagodas, but one story is that a wild boar helped a married couple to find gold relics of the Budhha in the ground. As a token of their gratitude for this treasure, the couple built the first stupa here. Later the words "wet" (pig) and "" (help) were corrupted into the present name Kakku.

For a long this temple area was unknown to the outside world. Some people in Taunggyi heard that there were ancient pagodas deep in the forest. But nobody saw them until a German journalist was led by Pa-O rebels, who are now at peace with the government, to these stupas, so it has been open to the public since then. 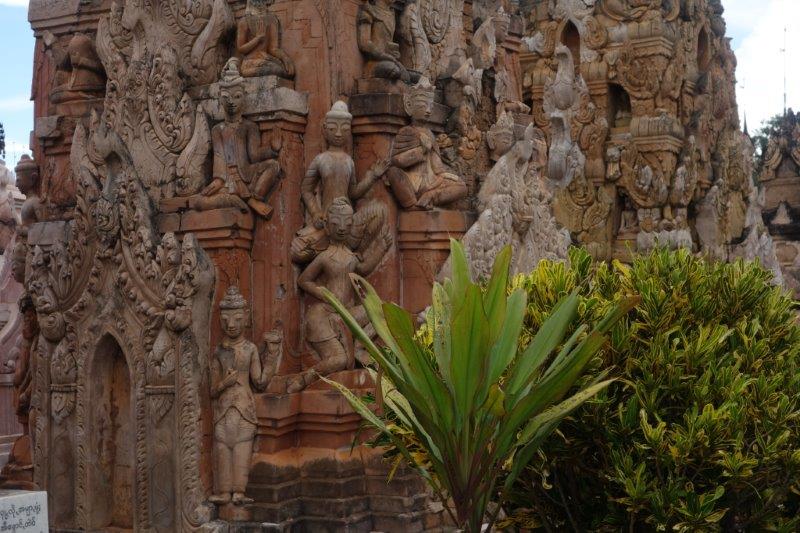 Today some of the old, more dilapidated stupas are being renovated though this is rarely to their advantage. Nevertheless, the sight of these thousands of stupas, tightly packed together and often decorated with legendary, filigree figures, is hugely impressive. 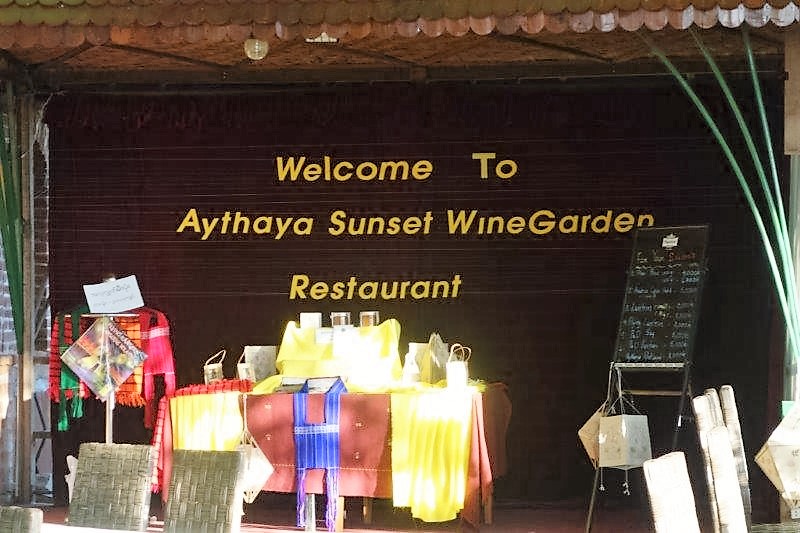 Time was marching on by now so, instead of heading for home and hoping to get back in time for Cameron to have a sleep, we stopped off for an early dinner at the only other vineyard in Myanmar besides Red Mountain which we visited two days ago, Aythaya. 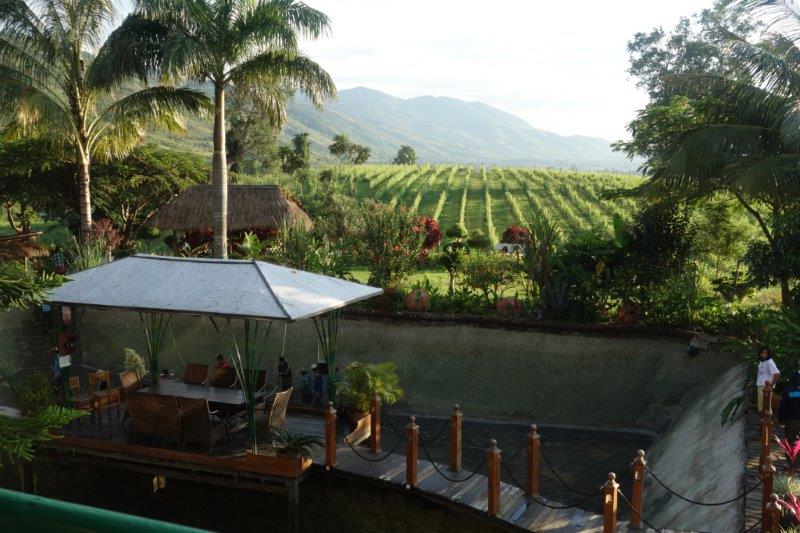 The vineyards looked impressive from the balcony of the restaurant. 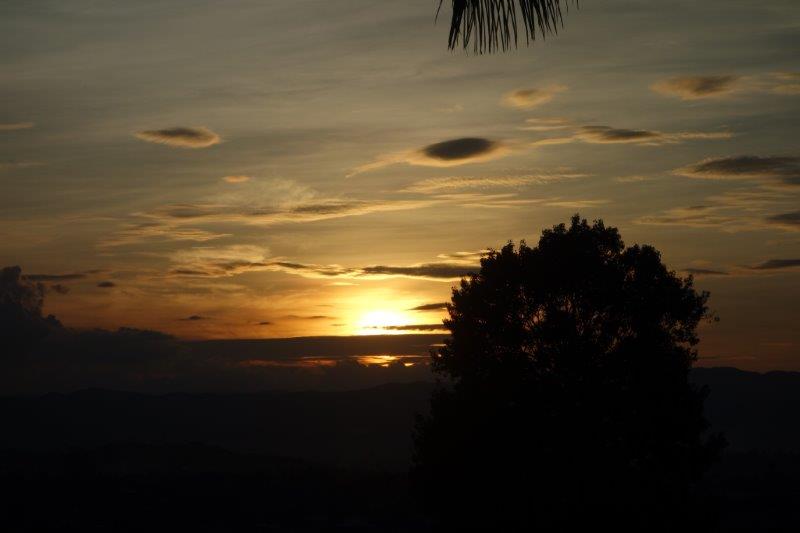 And so did the sunset half an hour later.

And so our driver drove home in the darkness – thank goodness. With the roads so narrow and all manner of things on them which have no lights – dogs, farm animals, people – as well as the millions of motorbikes, cars, trucks, coaches, etc., we needed to be in the hands of an expert.