On Friday afternoon I travelled by train from London to Farnborough to coincide with the time Suzi finished work. Unfortunately my train was half an hour late and we’d timed it so that we would be ahead of the Friday afternoon rush hour on the M25. No such luck! After moving at a crawl or remaining stationary for far too long, we hopped off at one of the exits and I navigated her through all sorts of highways and byways to miss all the big roads. But we still met plenty of traffic and the journey which she said should have taken two and a half hours, took five so we arrived much later than we’d intended.

I don’t know what it is about our family but the phrase ‘biting off more than we can chew’ comes to mind. Like Kate and Bret, my cousin, Geoffrey, and Jilly have bought a ‘challenge’ and are in the process of renovating it. It is amazing, however, and will be even more so when they’ve finished with it. 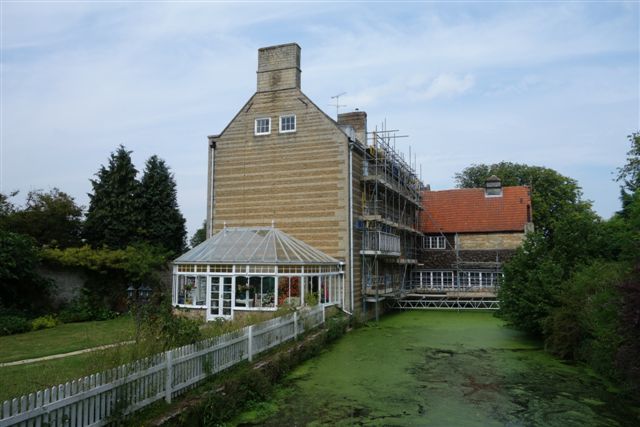 As with the property in Sydney, so in Market Deeping, scaffolding adorns one side of the house while work takes place on the upper storeys. 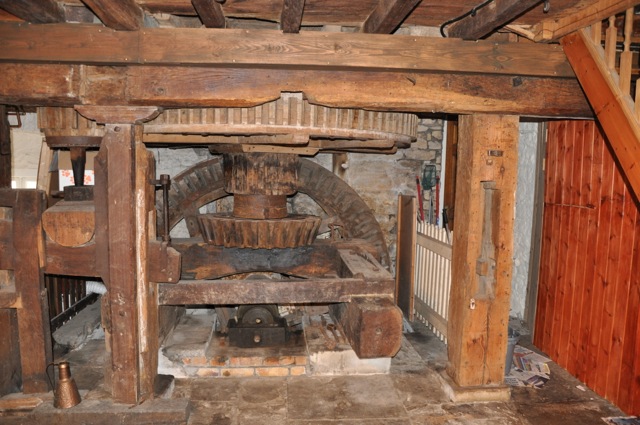 Their house contains the Old Mill and as one weaves ones way through the rooms with the sound of rushing water never far away, one can feel oneself transported back to the days when the granary 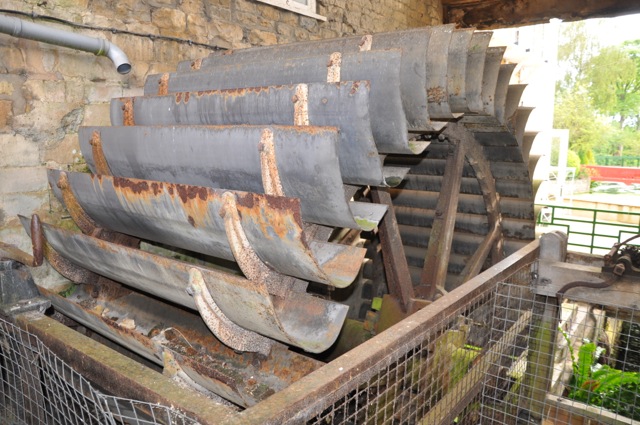 next door was a hive of activity, all dependent upon the water wheel.

They have plans to convert the workings into a massive fireplace on the inside and seal the back so that the room is insulated. This will leave the wheel itself as a feature on the outside. 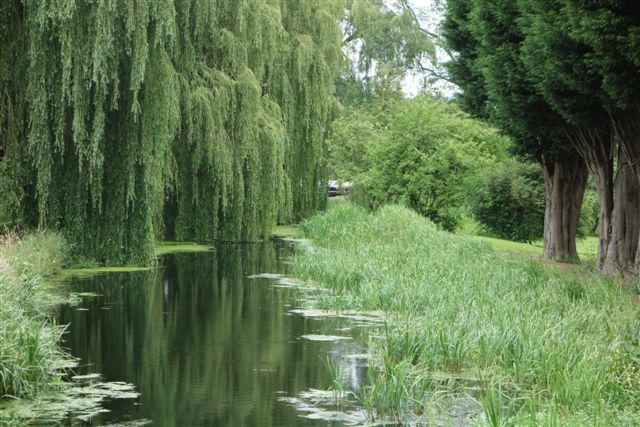 There are actually two rivers running past the house, one on either side. 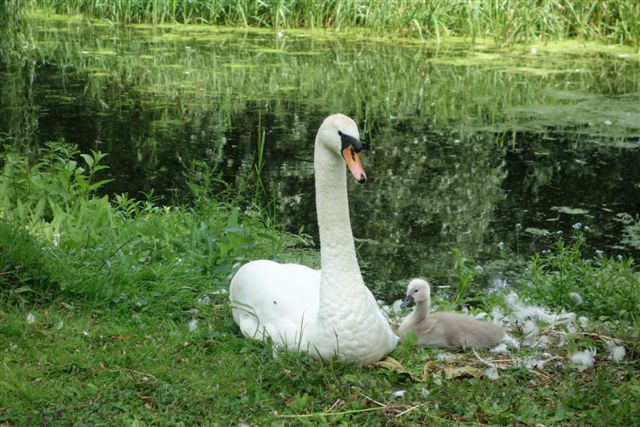 Wildlife abounds. However, all’s apparently not fair in love and war and this swan actually pinched this cygnet from another couple who (so she thought) had too many! 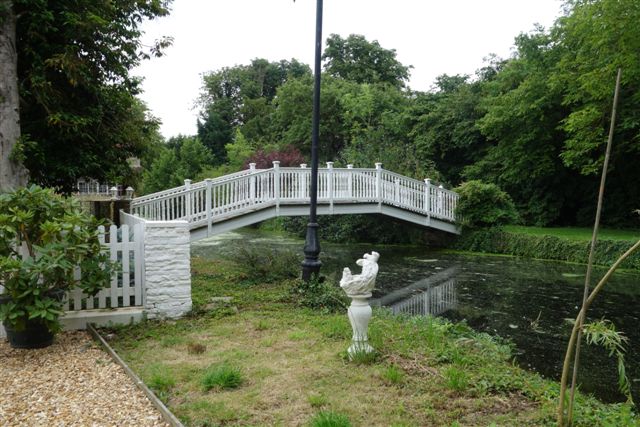 There are no shortage of waterways and a fabulous environment for the wildlife to enjoy. Beautiful weeping willows dip down into the water with delightful little bridges which allow one to walk from one side to the other. 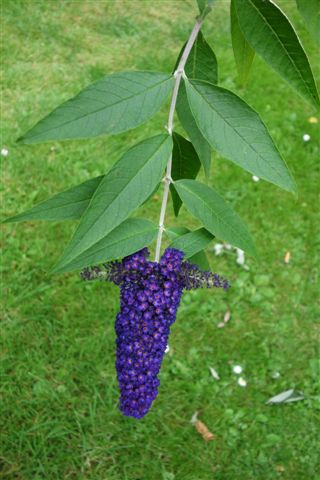 And there are plenty of beautiful shrubs and trees on all sides. This buddleia was a beautifully deep colour. 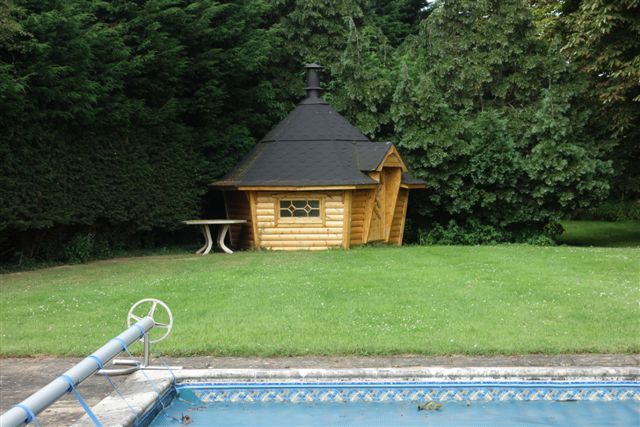 But the size of the ‘grounds’ are not for show, even though they are very beautiful and well set up for BBQs in a dear little hut, with the pool to collapse into on hot days – and we were there at the start of a heat wave.

They need all the space because Jilly breeds pedigree cats. Check out her website here. The site says that they’re breeders of exceptional Bengal cats and they have been for some time. The Bengal looks like a wild cat on the prowl with their distinctive spotted coats and large size, although one of their ancestors is the small, wild Asian leopard cat. They are domestic and make wonderful pets.

But recently, Jill has moved into breeding savannahs. A savannah cat is a cross between a domestic cat and a serval, a medium-sized, large-eared, wild African cat. 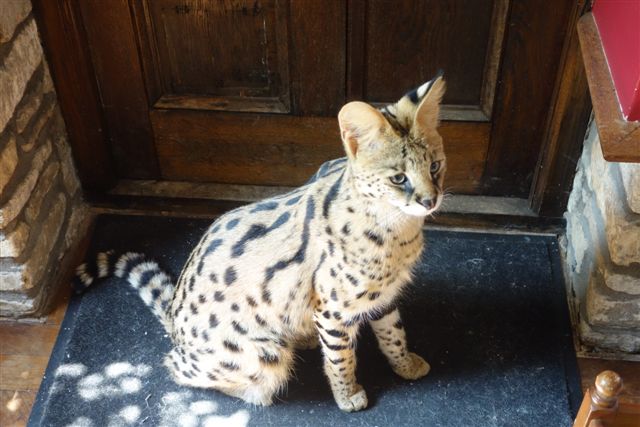 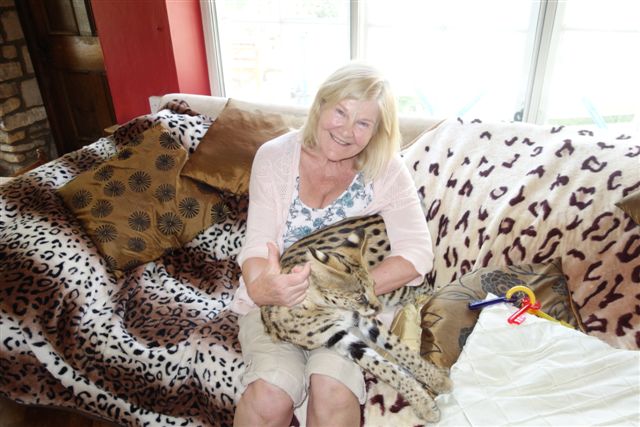 He may not look very big in this picture, but when you see him playing with Jill, you can quickly see how large he actually is – and he’s still only a baby! A serval is the second fastest animal on the planet, after a cheetah, so Kim only goes out for walks on a harness, into a special room in the house in the evenings to play with the family, or in his very large cage in the grounds during the day.

One trait of the serval is its ability to jump. Some savannahs can leap about 8 feet from a standing position, on top of doors, refrigerators and high cabinets! Kim does this frequently. They’ve very inquisitive and have been known to learn how to open doors and cupboards. Vocally, savannahs may chirp like their serval fathers, meow like their domestic mothers or do both. Kim chirps and his purr is an amazingly loud, deep and contented sound. 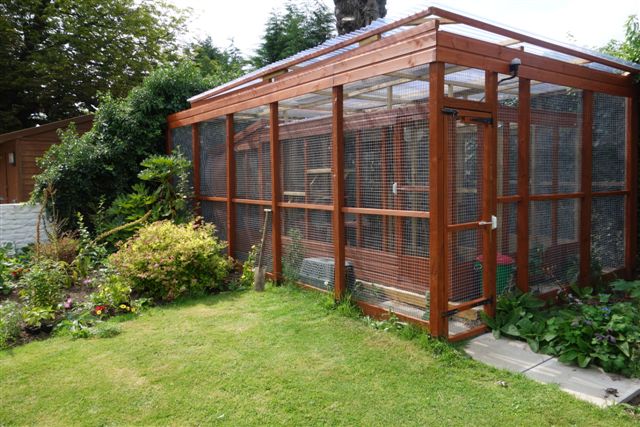 Because they’re importing these animals, they’ve received special permission to have a quarantine facility on their property. This has to be some distance from where the rest of their cats are housed and has to have double ‘walls’ so that there is no possibility of escape. They also have to have a wild animal licence for a serval as they are an endangered species in the wild in South Africa. 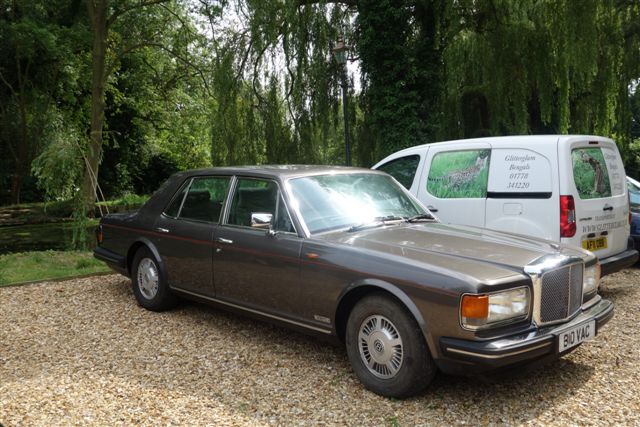 Apart from their interest in cats, Geoffrey has a passion for cars, usually pretty old ones, and there’s always an array of cars awaiting attention of some kind, to be driven, to be sold or just to be admired!

And it isn’t only cars that keep him busy. Geoffrey writes music and lyrics and he played me one of his recent compositions. I was seriously moved and will be looking out for someone who could possibly take some of his music to the top of the charts. If you know of anyone who might be interested in this area (unfortunately I don’t have the contacts) do let me know. 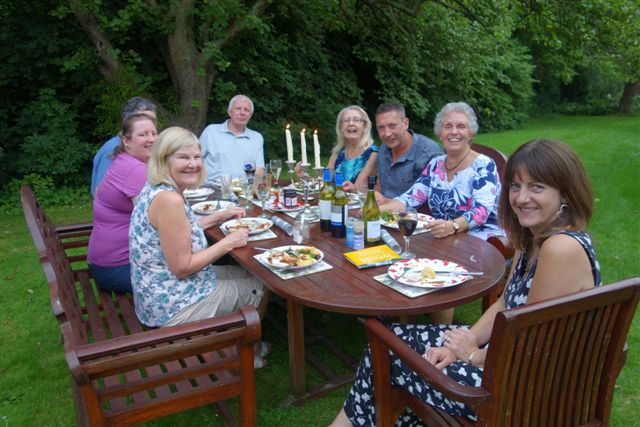 Despite how busy they were – and they are very, very busy, they’d arranged for a special family party on the Saturday night. And so it was that more rellies appeared and with the weather coming to the party too, we were able to eat al fresco and stay outside and chat until after 11.00 pm. Very special and something that is always possible in England in the summer on the right day. 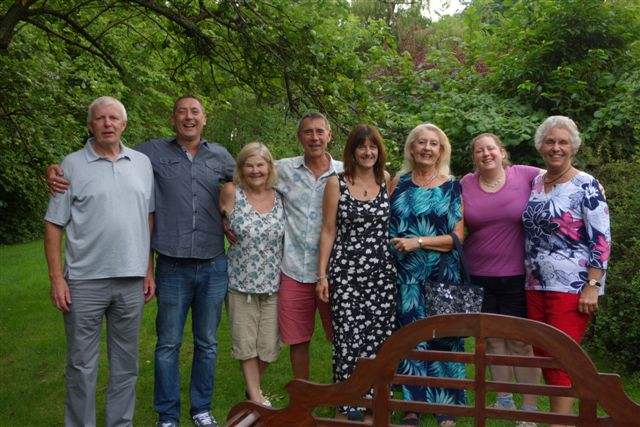 To have a gathering of eight relations from the far corners of the world, all together in the same place (and not for a wedding or a funeral!) was a great occasion and one that can probably not be replicated easily, especially when Geoffrey’s son, Daren, was visiting from Australia and I from New Zealand – quite a feat! 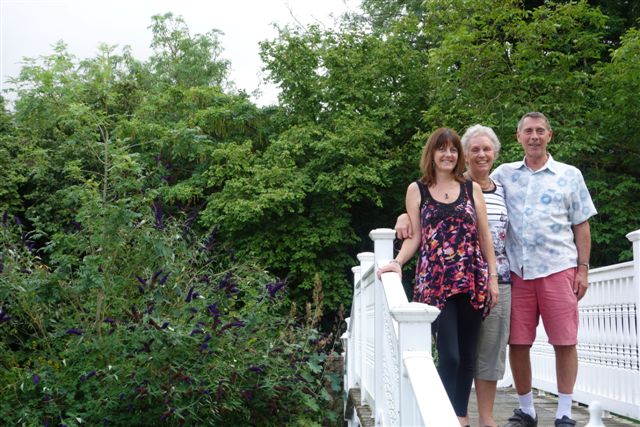 So, as it was such a rare occasion, before Suzi and I said goodbye to my lovely first cousins (and hers once removed!), Geoffrey, Rowena and I posed on one of the bridges. 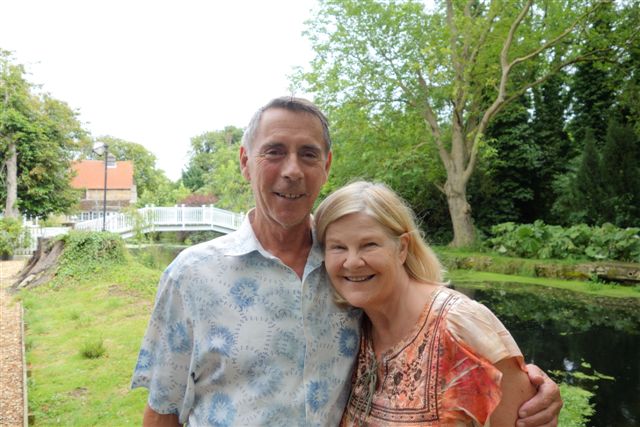 And then it was time to let our hosts get back to work as we set off for the next pleasure in store.