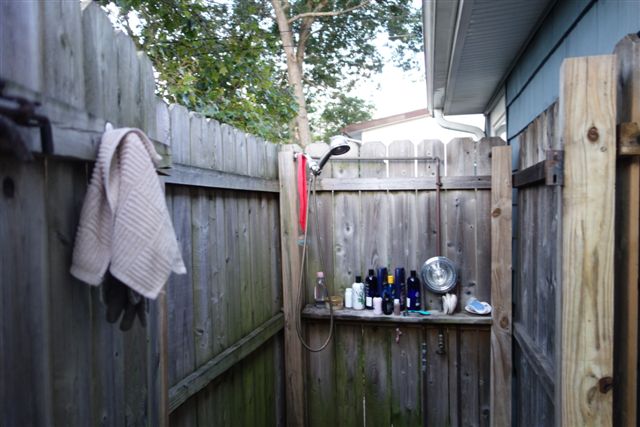 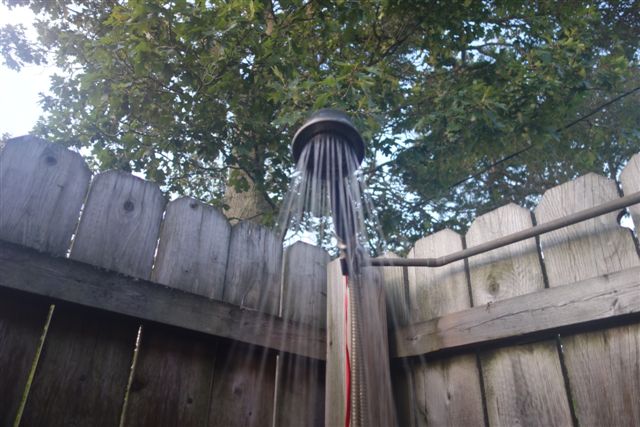 Apart from all the normal ‘mod cons’ in Liz’s beautiful home, she has an outside shower! The mind boggled when she told us about it, but the reality was divine! So, we had another new experience to relish. We could stand and enjoy the warm water and the shower power while looking up at the trees and the sky above. 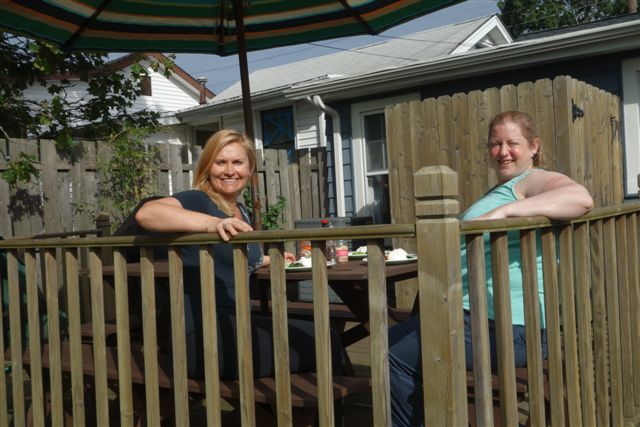 Liz cooked up a beautiful breakfast of spinach (from her garden) and poached eggs – a great start to the day. And we enjoyed it outside on the balcony in her delightful garden. 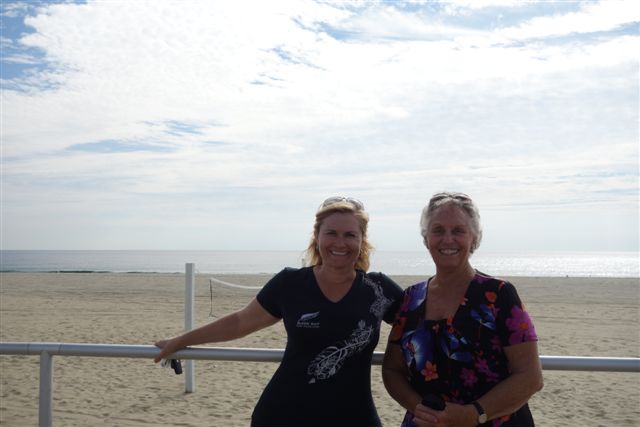 And then we were ready to leave on our enormous adventure. Liz suggested that she drove us via the stunning Belmar Boardwalk which seems to go on for miles of beautiful sands. She walks this boardwalk often. What a great place to live – it has a real holiday feel.

And so we were finally on our way – not without some trepidation I have to say – driving from the New Jersey coast, past New York. Everyone we talked to had expressed concerns about the route and the traffic. And, like Ginger Rogers who apparently ‘always danced as well as Fred Astaire but did it backwards’, we were driving in a strange car on the wrong side of the road!

Bless that GPS! I don’t know how we’d have coped without it. We couldn’t believe how well we coped and two hours later we were well north of New York and on our way to our first destination.

When we were doing our planning, Suzi had said that she wanted to explore a few of the less well-known places in Connecticut so we did some fairly serious diversions on the way to Mystic, our final destination at the end of our first day.

The distance from Lake Como to Kent in Connecticut is about 150 miles. For the majority of the journey we travelled on freeways but as we got further into the countryside, we ended up on little windy roads which were very charming. 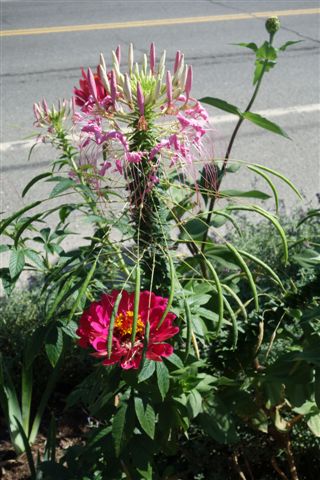 Kent is full of art galleries which we passed as we drove along the main street but it was actually this plant which particularly caught my attention because of its appearance when it was in flower and the difference when it went to seed. I have no idea what it’s called though so all suggestions are welcome! (Thanks to my very good friend and one-time neighbour, Rose, and her son, Matt, I now know that this flower is called a Cleome. Thanks Rose – and Matt). 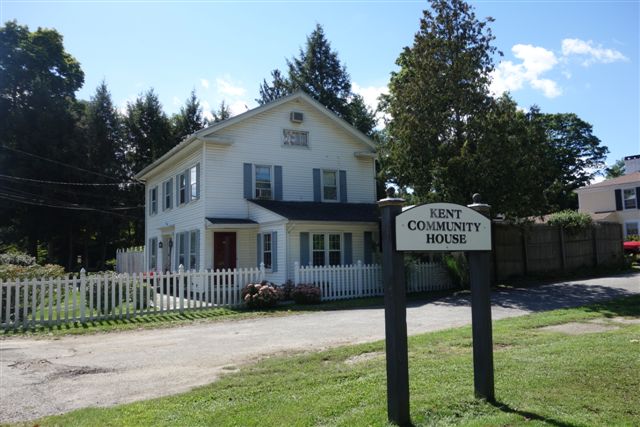 The buildings were interesting. There were lovely houses along the main street, like the Kent 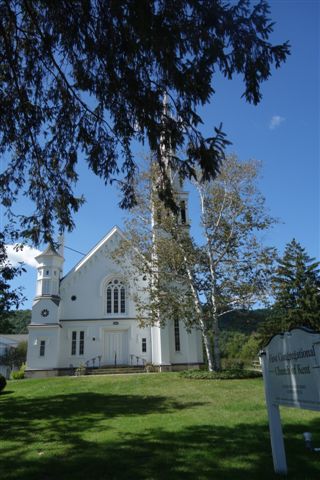 Community house. And the First Congregational Church of Kent.

Suzi’s favourites when travelling are lighthouses and waterfalls. So the purpose of coming to Kent 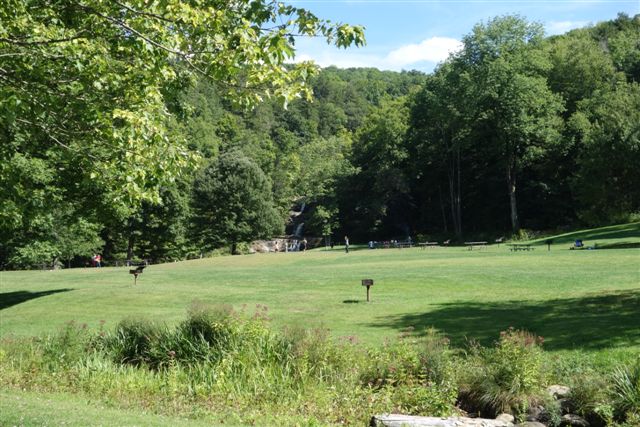 was to visit the Kent Falls State Park which is home to Connecticut’s most impressive waterfall, a 200ft drop of slate and marble. 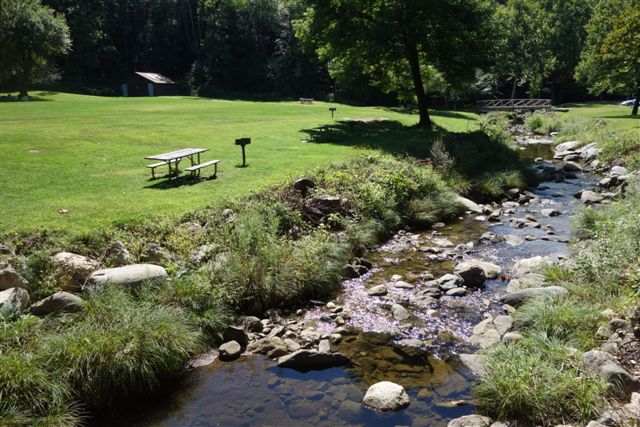 The Park was surrounded by beautiful trees and was obviously a popular place for families to gather and play – baseball on this occasion.

We crossed a bridge over the little stream and made our way to the foot of the Falls. 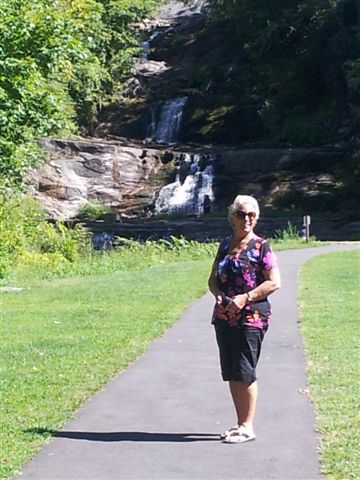 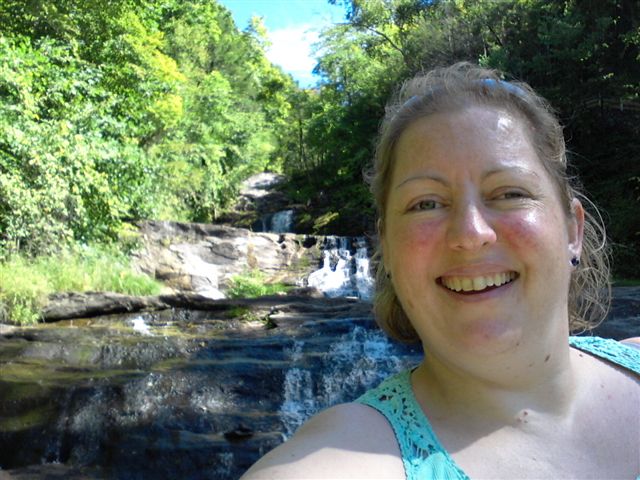 Suzi caught me on camera as I walked towards the base of the Falls. And managed to take a selfie after she’d clambered over the rocks and into the middle of the river.

From Kent we drove to Washington Depot, tucked high into the hilly woods of Washington, about another 30 miles. 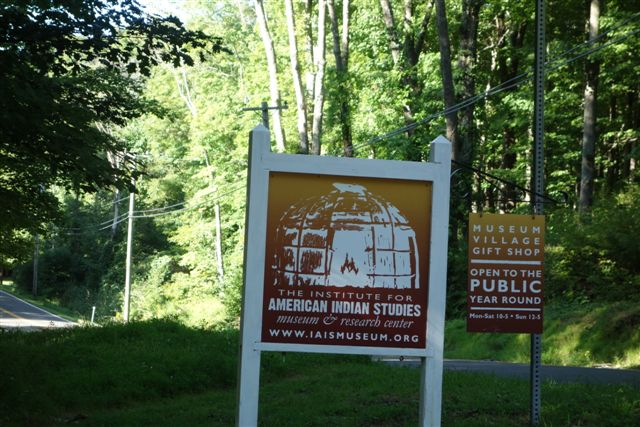 Our purpose here was to visit The Institute for American Indian Studies facility.

This facility re-creates a pre-European contact Algonquian Village and displays artefacts dating back 10,000 years. It was the perfect spot to learn about the woodlands culture of north-western Connecticut. We found the whole experience very interesting and very moving. 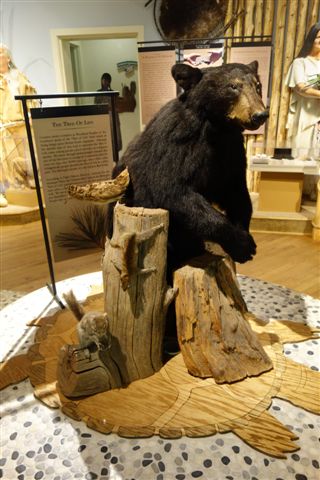 The tree of life was particularly compelling with a bear rising out of the middle of it and other animals on all sides. The plaque behind the bear was written on 5 July 2009 and reads, “Creation stories common to Woodland Peoples of the Northeast speak of the ‘Tree of Life’ from which all living things upon Mother Earth originated. Although the specific type of tree used to represent the Tree of Life varies among peoples, most envision an evergreen species. We know through archaeological research that one of the first trees to emerge in Connecticut after the latest Ice Age, over 10,000 years ago, was a white cedar. Schaghticooke people describe the Tree of Life as a white pine. For Mohegan people, it is the Eastern Red Cedar”.

‘According to Faith Damon Davison, Archivist for the Mohegan Tribe, the Eastern Red Cedar is the Mohegan ‘Tree of Life’, perhaps because it is the first tree to come back after a clear-burn forest fire. It is used ritually as well’. ‘We use it as a smudge to purify our thoughts; we put branchlets of it into the open grave to keep our People safe on their journey’. 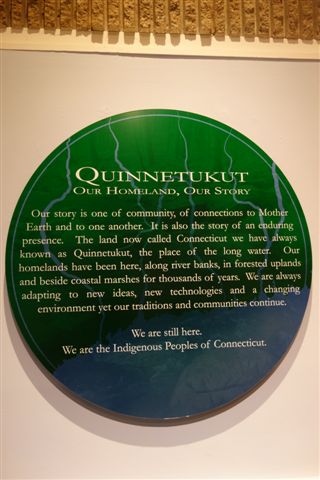 There were so many exhibits to see but this plaque seemed to sum up the thoughts of these proud people.

This plaque reads, ‘Quinnetukut – Our homeland, our story’. ‘Our story is one of community, of connections to Mother Earth and to one another. It is also the story of an enduring presence. The land now called Connecticut we have always known as Quinnetukut, the place of the long water. Our homelands have been here along river banks, in forested uplands and beside coastal marshes for thousands of years. We are always adapting to new ideas, new technologies and a changing environment yet our traditions and communities continue. We are still here. We are the Indigenous Peoples of Connecticut.’ 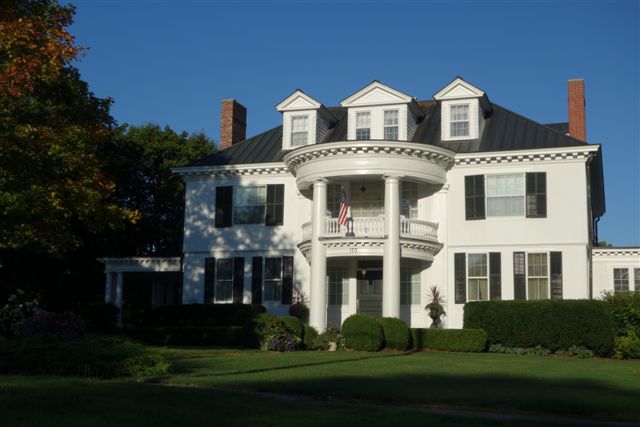 Moving on from Washington Depot, we set off for Litchfield, a small market town about twenty miles further on. Litchfield appears to be a very wealthy area and is apparently filled with historical homes. Certainly, the houses were very substantial and very beautiful and the lawns and gardens were all tidy and manicured. 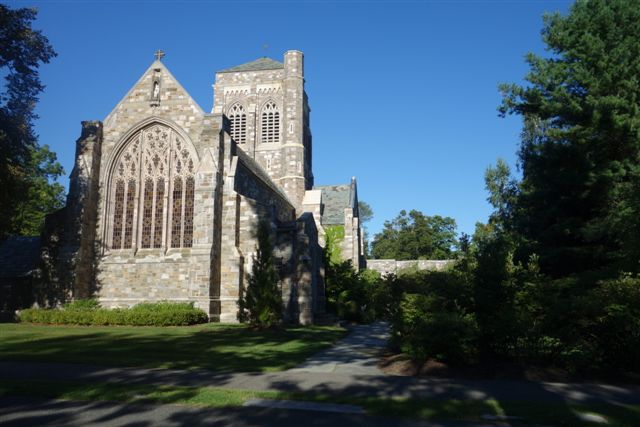 There was, however, quite a contrast in the building materials used as can be seen from Saint Michael’s Episcopal Church situated in the main street. 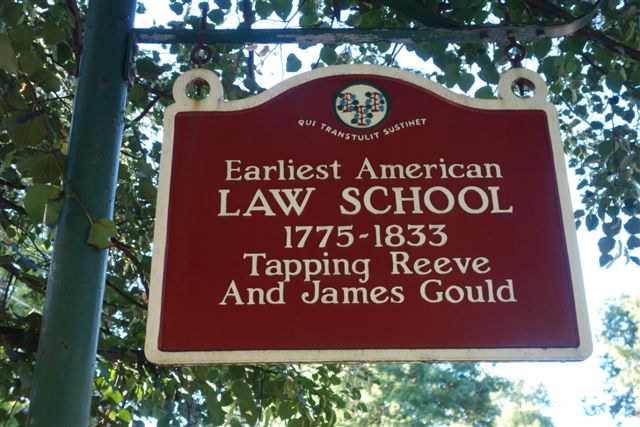 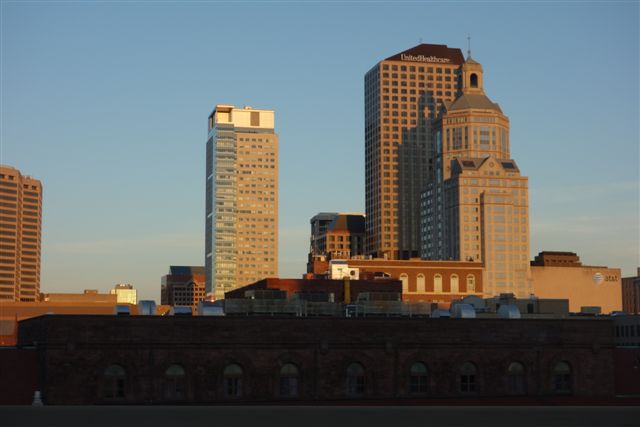 We’d been told that our next destination, Hartford, was one of the poorest cities in the nation with three out of every ten families living below the poverty line. It was 31 miles away and given that we drove from Litchfield to Hartford in about an hour, we imagined that we’d see a complete contrast. Unfortunately, however, the day had got away from us by this time and we only saw the Hartford skyline in the setting sun. What we saw gave us no indication that this was a poor city but we couldn’t really make any judgements. We thought it was high time we headed for Mystic which was still almost two hours – 56 miles – away.

By the time we arrived at our hotel, there wasn’t time to do anything more than have a light dinner and fall into bed! We highly recommend the hotel – Howard Johnson Inn, Mystic, 253 Greenmanville Avenue, Mystic 06355, Connecticut, +18605362654 – if you’re ever travelling in this area. With taxes and fees it only cost us £57.20 for two queen beds in one excellently equipped room, which we thought was pretty good value. And free WIFi and free parking were also included.

Kent, Washington Depot, Litchfield, and Hartford CT, USA – 3 September 2014
+ Text Size -
Do NOT follow this link or you will be banned from the site! Original generation time 2.4062 seconds. Cache Loaded in: 0.0620 seconds.