Transport in and around London is so easy. I set off for East Putney with my rather large suitcase (my cabin case broke soon after I arrived in England and it’s not worth getting another as I was going to leave it behind anyway!). A very kind man carried it up the stairs to the platform (not nearly enough of the stations have disabled access and there are often long flights of steps to negotiate). But I knew they were the only steps I’d have to encounter all day so that was a relief. I was at Paddington with plenty of time to spare and had bought my tickets the day before so was able to relax. Trains going long distances are air conditioned and you can make choices like – quiet carriage, forward facing, aisle or window, table and power socket and I had chosen all of the above! So I settled down for the three hour journey, plugged in my lap top and brought my blog up to date! Great opportunity! As you can imagine the journey passed in a flash.

I changed at Exeter St David’s to the local line to Exmouth and beyond. Jackie and Peter were at the station to meet me and it was so good to be back in such a familiar place and to know that the next several days would be spent among the friends I’ve made over the years at the Budleigh Croquet tournament. The weather forecast wasn’t great for the whole week but it’s impossible to tell because it’s fairly localised down here, so we just had to hope for the best.

After a bite of lunch, Jackie and I went up to the club. The tournament had started that morning but our events didn’t start until Tuesday for some reason so we were able to stroll round the ten lawns, reconnect with players met in previous years, have a practice on the practice lawn and generally get reacclimatised.

Monday morning dawned fair so Jackie decided that a walk to Otterton Mill would be a good idea. She didn’t really know how far it was, there and back, but the day was ours so we set off anyway. 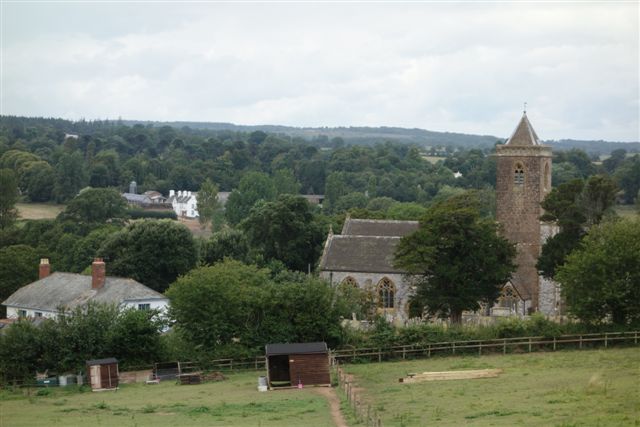 Jackie parked the car alongside the River Otter and we made our way to the village of Otterton. We took the ‘high’ road there and looked down at the peaceful village with its lovely church. 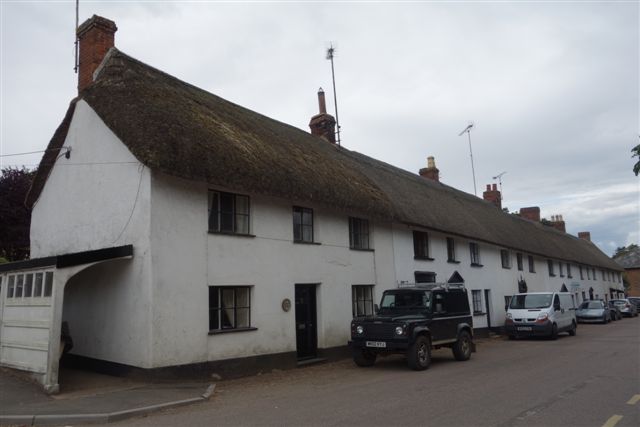 Reaching the village itself we strolled along the main street with its quaint thatched cottages and made our way to The Mill. 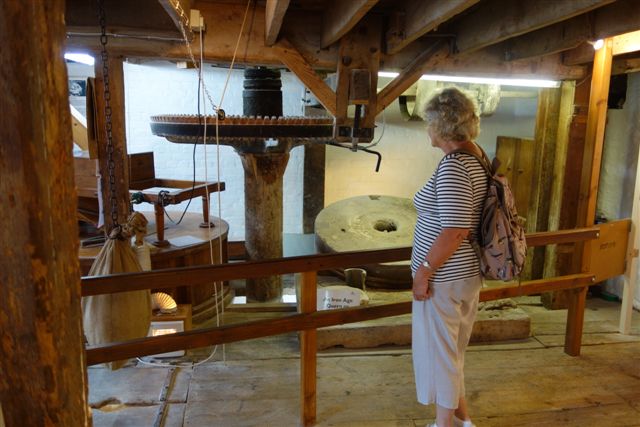 There’s a gift shop inside The Mill and we spent some time there, enjoying the local art and crafts – very different from those in New Zealand and very tempting. Then we examined the workings to see how they make their flour and bread.

A few bits of the history were really fun to read about. During Norman times, Otterton was the only Devon settlement to have three mills. Otterton and its lands were granted by William 1 to the abbots of St Michel in Normandy. It was their most important English manor. Local serfs had to keep the priory stocked with ‘two good beds with bedding and four pairs of sheets, tables, copper and pewter vessels’. In exchange, the monks were bound to provide ‘sixteen shillings worth of bread each week for any poor person who came and asked for it’. 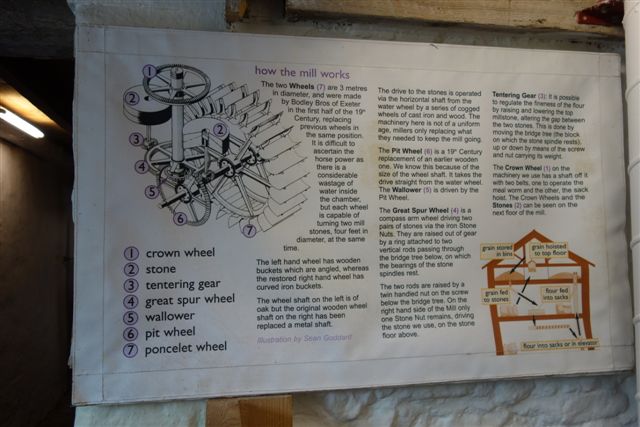 In 1260, Geoffrey Legal, a prior, recorded the customs of the manor. The tenants agreed that the Prior had the right to every porpoise caught in the Otter estuary! Before the ridge at Budleigh Salterton cut off the water, the Mill stood on the edge of the estuary. He paid every sailor who caught one twelve pence and a loaf of white bread, and two loaves to the master of the fishing boat.

In 1539, at the dissolution of the monasteries, Henry VIII gave Otterton Manor to a clerk at his Court of Augmentation, Richard Duke. Otterton Mill remained a substantial corn mill although it never developed industrial proportions, possibly because of the severe silting up of the river estuary in the late fifteenth century.

The Mill changed hands several times during the next three centuries. John Uglow became the Miller in the middle of the 19th century. He introduced constables into the village for the first time and armed them with cutlasses and pistols because poaching and smuggling were so rife in the village. The locals took their revenge by climbing his garden wall and cutting down all his fruit trees.

He and his wife built up the Mill into a flourishing business and delivered flour as far away as Plymouth, sending it off on coasting vessels from Topsham. Mrs Uglow also delivered flour fortnightly to Lympstone, Budleigh Salterton and Exmouth, travelling by horse and wagon. 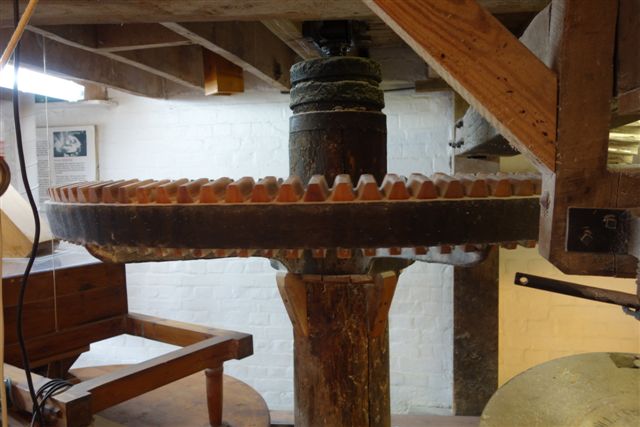 Uglow purchased two sets of French Millstones of which he must have been proud, because he carved rhymed dedications on them. They are both still in the Mill and the dedications read:

By 1976 the Mill was in a state of disrepair. Work began in Spring 1977 to restore it and it was opened to the public in July 1977. It continues to grind its own wholemeal flour and houses its own bakery, restaurant, artists’ workshops and gallery and craft shop. Wholemeal flour has been made there since 1979. An average of three quarters of a ton is ground here each week. 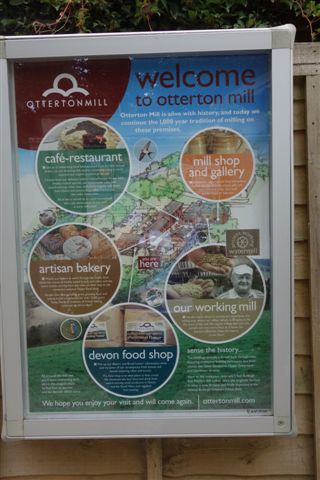 Bread made from the flour is available in the Bakery Shop where it’s also possible to buy Otterton Mill flour. When Jackie and I had finished our lunch, for which the queue was enormous, and went into the Bakery Shop in the hope of buying some of the bread, it was all gone! Clearly Otterton Mill is a great tourist attraction in the area. 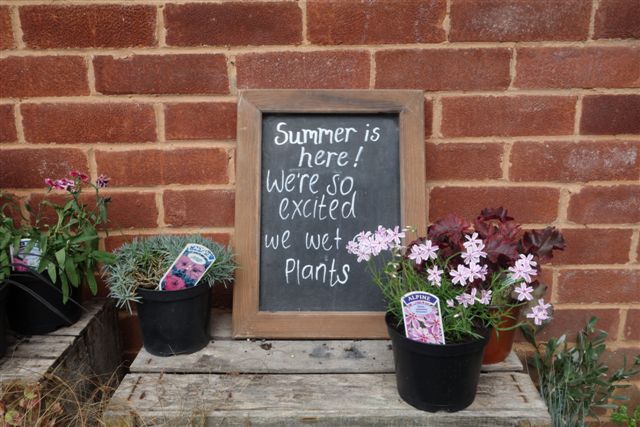 As we were leaving the Bakers Shop, I was very taken with this delightful sign on a table outside which reads ‘Summer is here! We’re so excited we wet our plants!’ 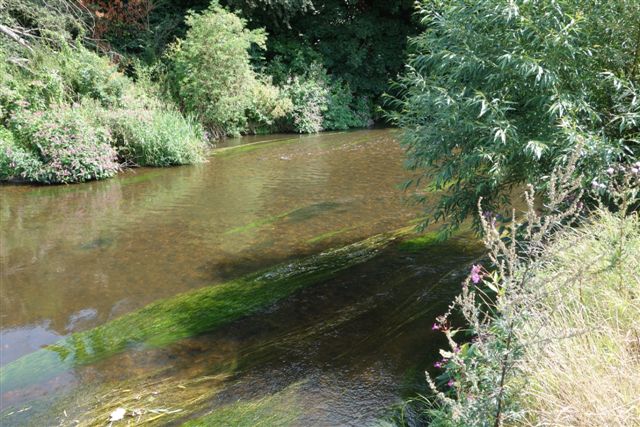 Leaving the Mill, and a delicious ‘rustic’ lunch (including fruit scones, home-made strawberry jam and, of course, Devon cream, we set off back to the car by the lower route alongside the river itself. It was warm by this time and there weren’t too many visitors (or ‘grockles’ as they’re called in Devon!) so we were able to enjoy the tranquil stroll in relative peace.

I confess that a 5 mile walk is a little above my current fitness level so I collapsed on a very comfy sofa and was soon fast asleep (but only for about ten minutes)! I seriously hoped I’d be able to ‘last’ nine hours of croquet matches the following day … 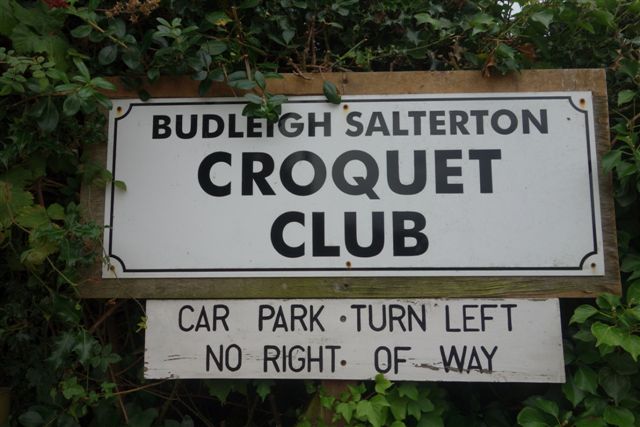 But as it turned out, the five games were spread over four days so the only day I had to play two singles was the last one. But Jackie and I had to play a doubles match every evening so it was fairly demanding. 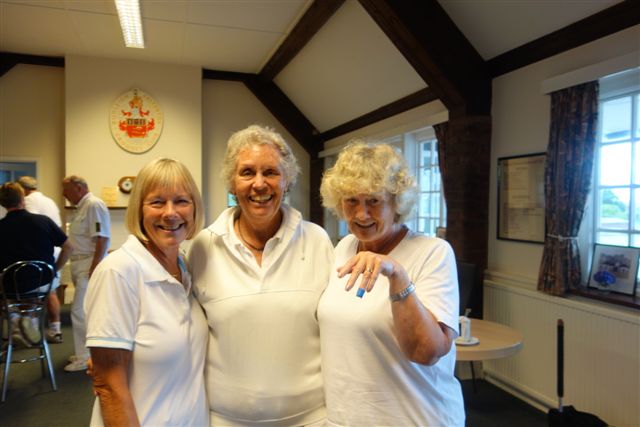 The ten lawns are really lovely. And when I last played at Budleigh two years ago, I had won one of the ‘class’ events and Jane (left) had been the runner-up. She, Jackie and I always have a good laugh together. Poor Jackie was lamenting the fact that she had injured one of her fingers in her previous game. 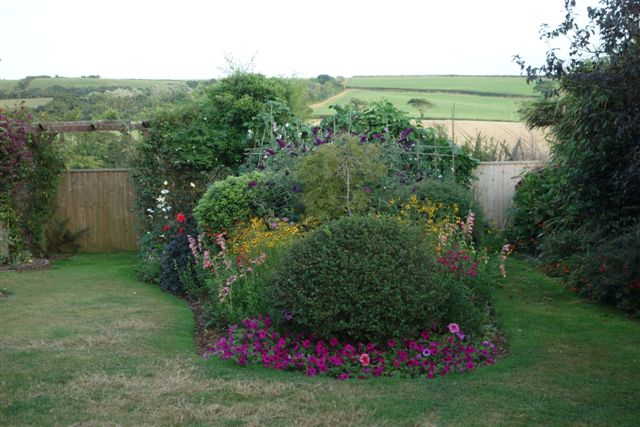 As we weren’t in any of the finals on the Saturday of the tournament, we spent a relatively lazy day, enjoying their beautiful garden with the farmland beyond. 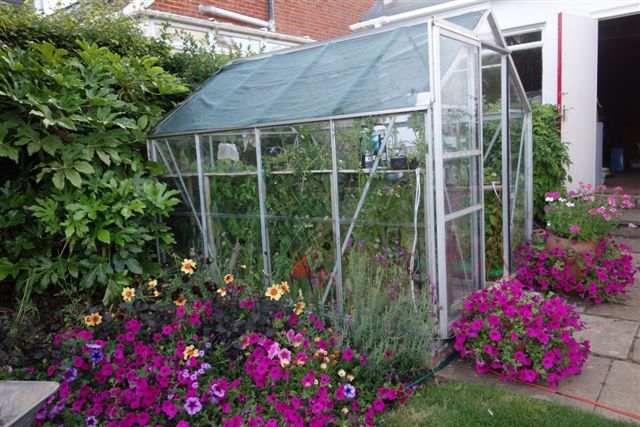 We picked their cocktail tomatoes from the charming little greenhouse, surrounded with colourful petunias and enjoyed a BBQ at the end of a long day on their balcony (Peter is a wonderful cook and had sumptuous meals ready for us when we got home each day). 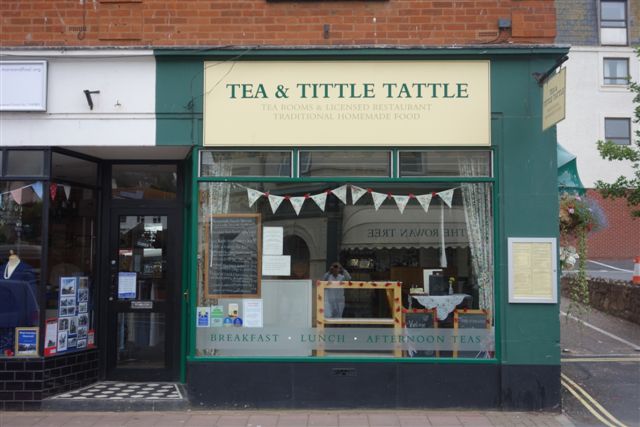 And during a stroll in the town the next morning, I caught sight of quaint little shops with fabulous names in the High Street.

It had been a great week with good friends, excellent and very generous hospitality and wonderful food.

And the croquet results hadn’t been all that bad either! I won four out of my five singles and Jackie and I had won three out of our four doubles. Not good enough to get into the finals but on the right side of the ledger. I wondered if I could emulate these results in Nottingham the following week …