Today we visited Inwa, or Ava, which is an ancient imperial capital of successive Burmese kingdoms from the 14th to the 19th centuries. 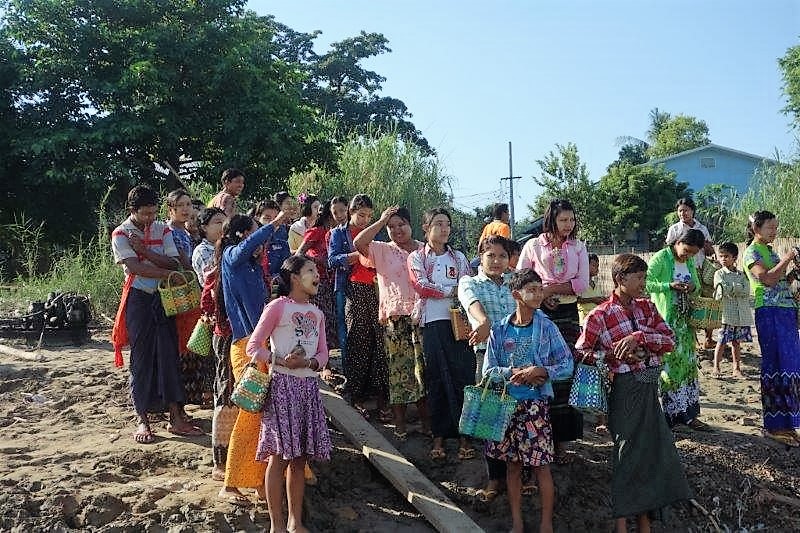 We crossed the river in another small boat and approached the shore to be beset (there’s no other possible word for it) by countless villagers wanting to sell us their wares. Tourism is only about the fifth most important economy for Myanmar but I’m sure it can only grow.

Hard though the villagers are to resist – especially the beautiful looking children – it was the only way if one had no intention of buying what they were offering. They had obviously learned words from the tourists over the years so when we said ‘no’, we were treated to comments like ‘later’ and ‘I’ll remember you’ and ‘you think about it?’ I found this upsetting because it meant that tourists had lied to them in an attempt to ‘turn them away’ when, in fact, they had no intention of ‘thinking about it’ or deferring a decision to ‘later’. 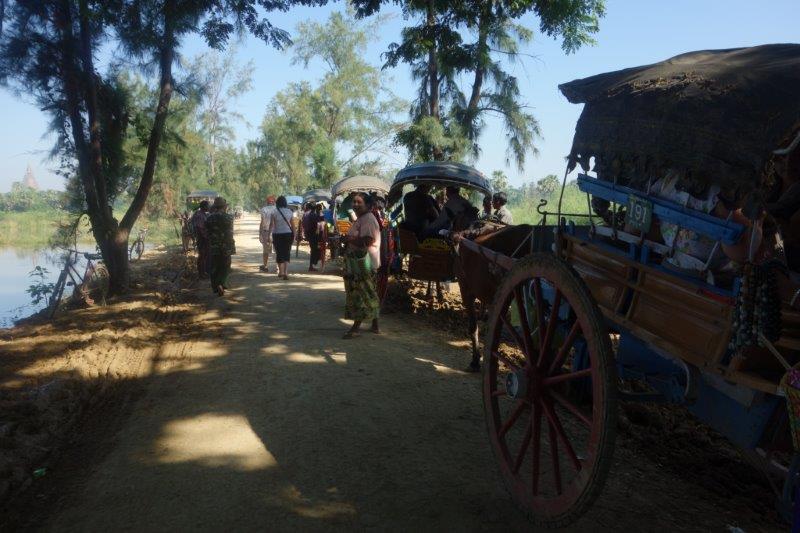 Our team of three had been upset by the poor condition of the horses we encountered in Maymyo so Celine had organized a for us. We watched the rest of the passengers embark on their horse and carts and were very glad that we didn’t have to. Clearly, some of the owners were not taking sufficient care of their horses and we had no wish to add to their ‘burden’. 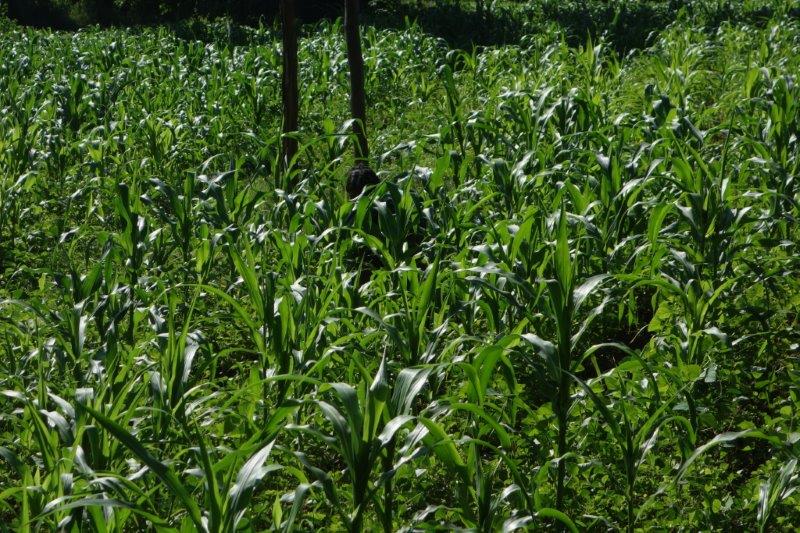 We passed quite a few crops; bananas, corn, and beans to name a few. They’re pretty clever about their planting with one crop growing beside another as in this case with corn being the larger crop. The woman you can just see in the picture (her head is just in front of the nearer post) is harvesting beans from underneath the leaves of the corn.

We learned from Ye Mon (our guide again today) that Ava had been sacked and rebuilt numerous times throughout history. The capital city was finally abandoned after it was completely destroyed by a series of major earthquakes in March 1839. Though only a few traces of its earlier grandeur remain today, the former capital is a popular day-trip tourist destination as we found out. 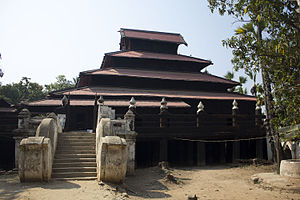 We visited the Bagaya Monastery, the monastic college for the royals during the Konbaung period. It is, of course, a Buddhist monastery, this time made entirely out of teak. 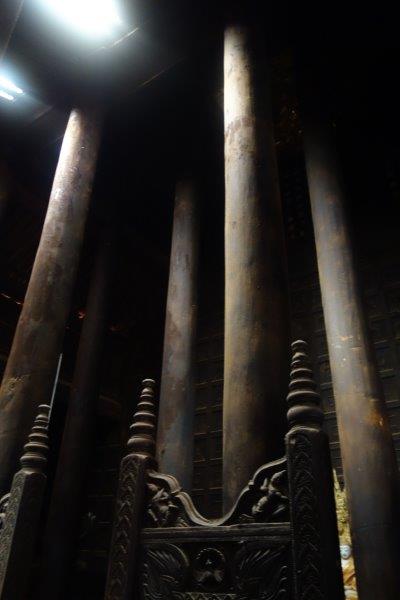 It was first built in 1593 about 18km from present-day Mandalay with 267 gigantic teak wood posts – and they are seriously gigantic, not just in height but also in girth.

This weather-worn but monastery, 57m high and 31,  stands in the middle of wide paddy fields, with palms, banana trees and thorny green bushes clustered in profusion around its shady base. It is decorated with splendid Burmese architectural works such as carvings, floral arabesques, the ornamentation showing curved figurines and the reliefs of birds and animals as well as small pillars decorated on the wall.

During the reign of King Bagyidaw (1819–1837), a great fire broke out on 15 April 1821. Many important buildings, including the Bagaya Monastery, were burnt in the fire. The government tried to reconstruct it in 1992 and built the new brick building in the place of the old monastery for the use of Buddha images and Tipitaka scriptures. It was recorded that the new monastery was constructed based on the model of the old monastery. 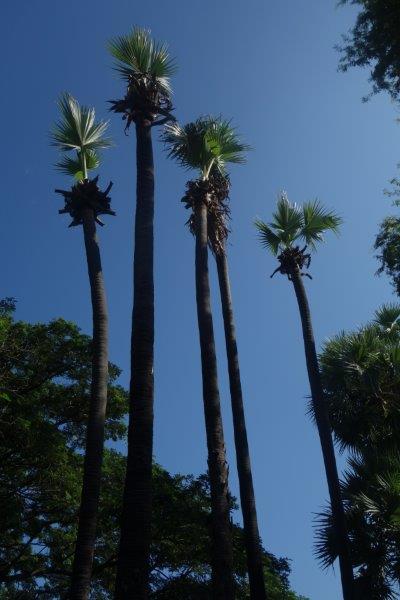 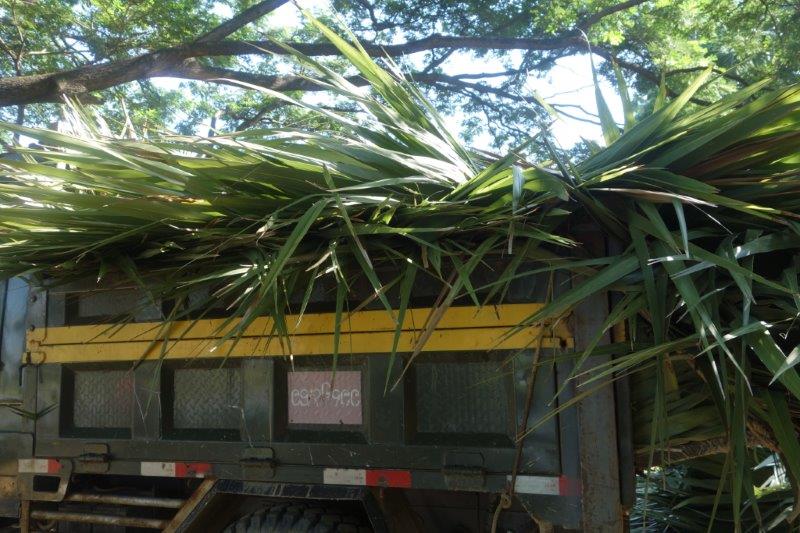 lorries to take away for roofing. As with everything else we’ve seen on the agricultural front, it is very intensive and physical. Ye Mon assured us that climbing these tall trees was something that was accomplished really quickly and easily! 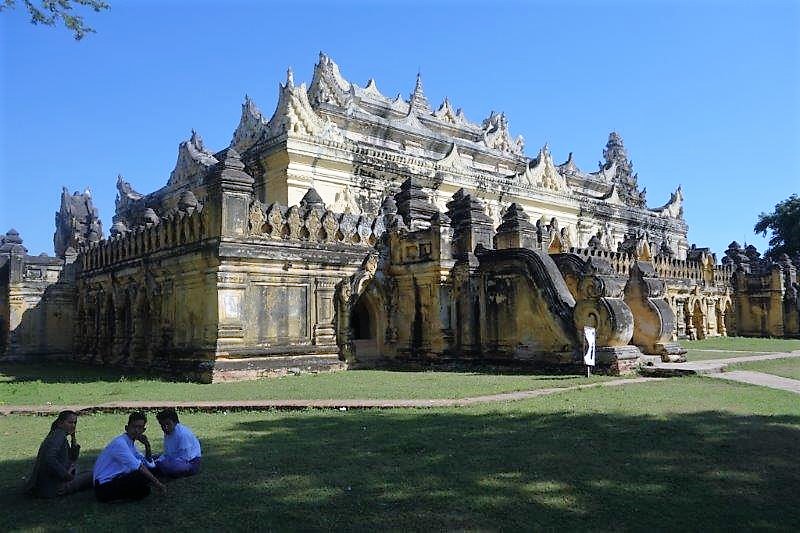 Popularly known as Me Nu Ok Kyaung (literally ‘Me Nu's Brick Monastery’),  the new Bagaya Monastery was built in 1818 by Queen Nanmadaw Me Nu, the famous Chief Queen of Bagyidaw, for the residence of her religious Preceptor, the Nyaunggan Sayadaw. 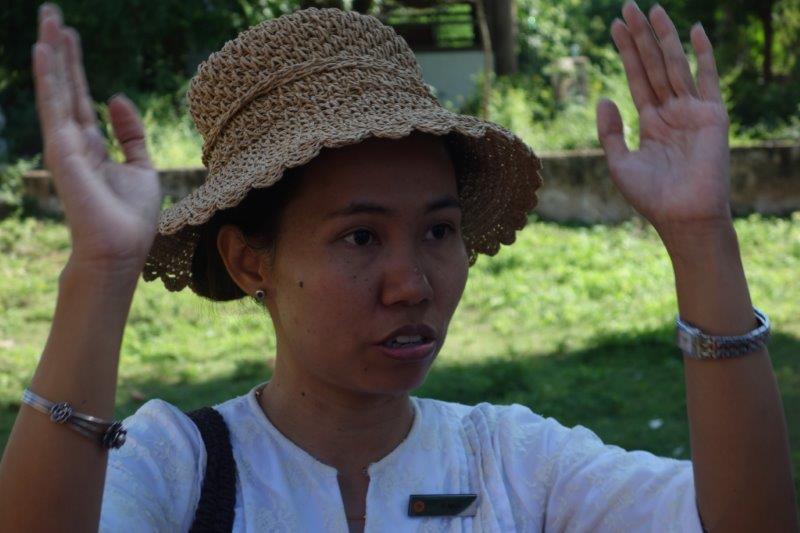 Ye Mon told us that the Queen’s Longyi had blown away from her one day into the grounds of the King’s residence and he had sought her out and married her.

She was a strong woman and had become a very good queen. 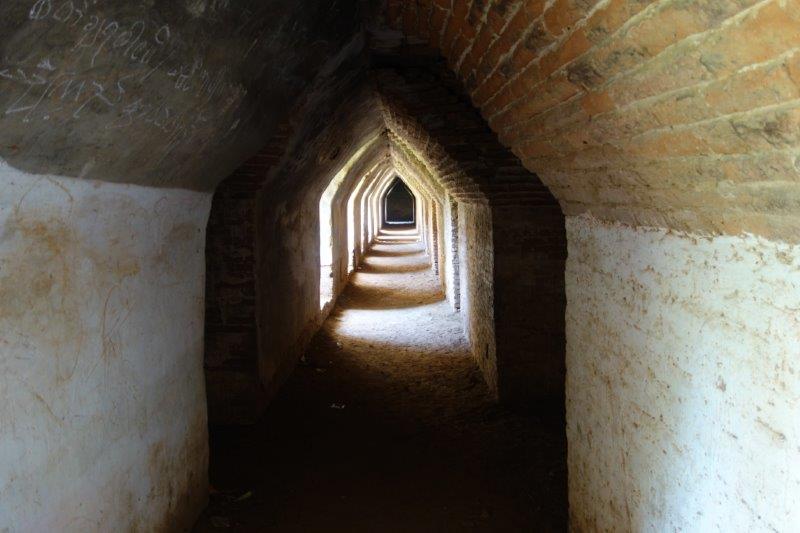 The earthquake of 1838, damaged the Monastery, and in 1873, it was restored by Sinbyumashin, Queen of Mindon, and a daughter of Nanmadaw Me Nu. The building is markedly different from traditional Burmese monasteries, which are constructed with wood, not masonry.

Ava was the capital of Burma for nearly 360 years, on five separate occasions, from 1365 to 1842. So identified as the seat of power in Burma that Inwa (as the Kingdom of Ava, or the Court of Ava) was the name by which Burma was known to Europeans down to the 19th century.

Strategically located on the confluence of Ayeyarwady and Myitnge rivers, and in the main rice-growing Kyaukse District of Upper Burma, the location of Ava had been scouted as a possible capital site as early as 1310 by King Thihathu. Though Thihathu eventually built his new capital at Pinya a few miles east inland in 1313, great-grandson Thadominbya, who unified the Sagaing and Pinya kingdoms in September 1364, chose the site of Inwa as his new capital.

Inwa was officially founded on 26 February 1365 on a man-made island created by connecting the Ayeyarwady on the north and the Myitnge on the east with a canal on the south and the west. The construction of the artificial island also involved filling in the swamplands and lakes.

The end of the city came via a natural disaster. Starting on 22 March 1839 the Inwa–Amapura region was hit by a series of earthquakes. The main earthquake hit the region, as far west as Sagaing, the next day, at five o'clock in the morning on 23 March 1839, and many tremors followed for days . The entire region was left in a shambles in their wake. The capital was hardest hit: everything was ; many people and livestock perished. The city was not rebuilt. King Tharrawaddy chose instead to rebuild a new palace in and moved the seat of his government there in February 1842. 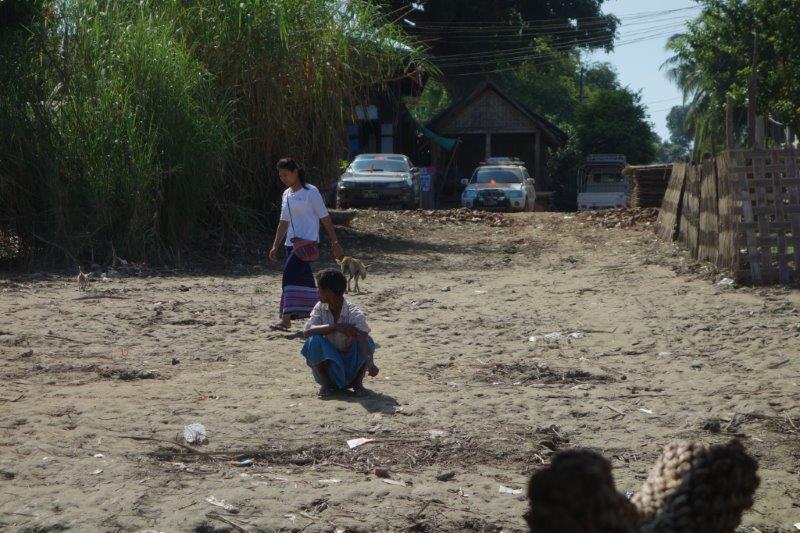 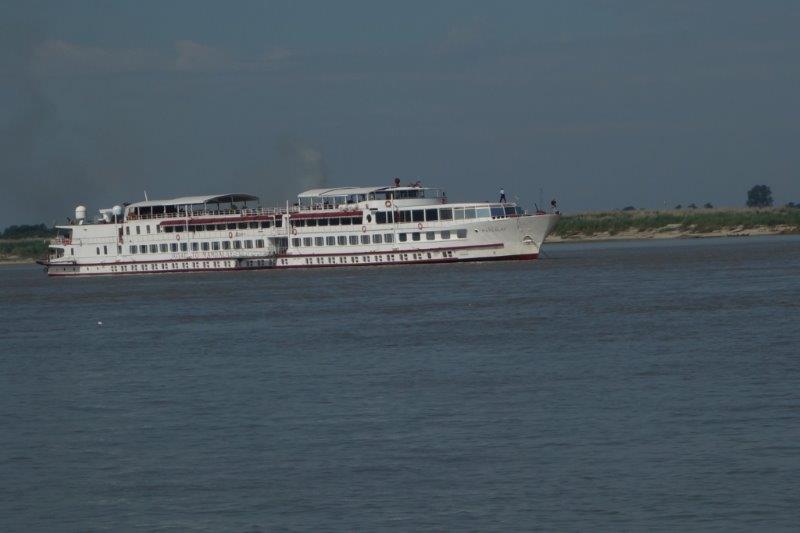 Visiting Ava had been a fascinating experience to see village life in action. But I confess that the contrast between the conditions for those living in the village and what we were experiencing just a few away in the middle of the river made me feel more than a little uncomfortable. 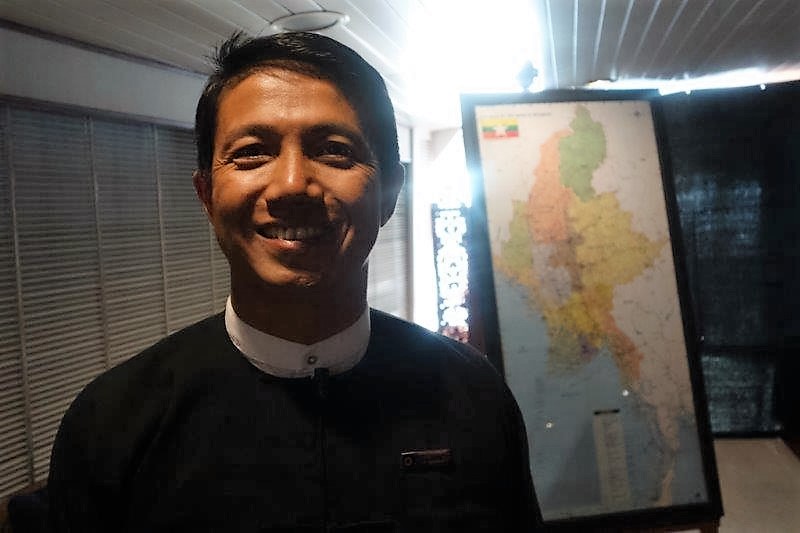 Our final treat for the day was a talk from Thet Naing, one of the senior guides.

I asked him if he had any notes he could give to me because he outlined the history very clearly and concisely. it was all stored in his head! But I satisfied myself with taking photos of some of his ppt slides to give a bit of a pictorial story at least. 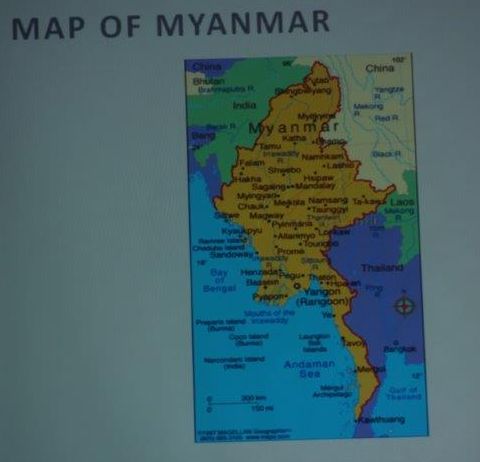 Thet first showed us a map of Myanmar (clearly I was at a bit of an angle!) and then showed us the various regions 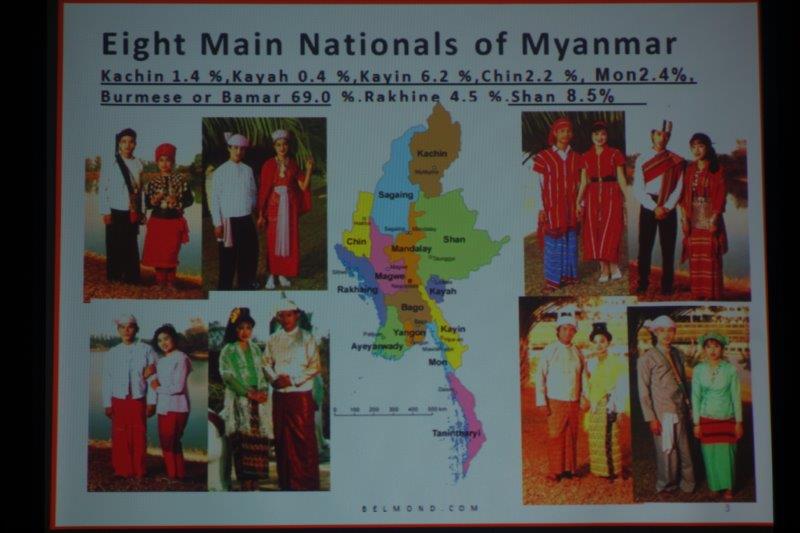 or states and the main nationalities that contributed to the whole. Shan state to the east is very fertile and produces some of the best rice in the world. The great Ayeyarwady River and the plains around it play a huge part in the fertility of the country. 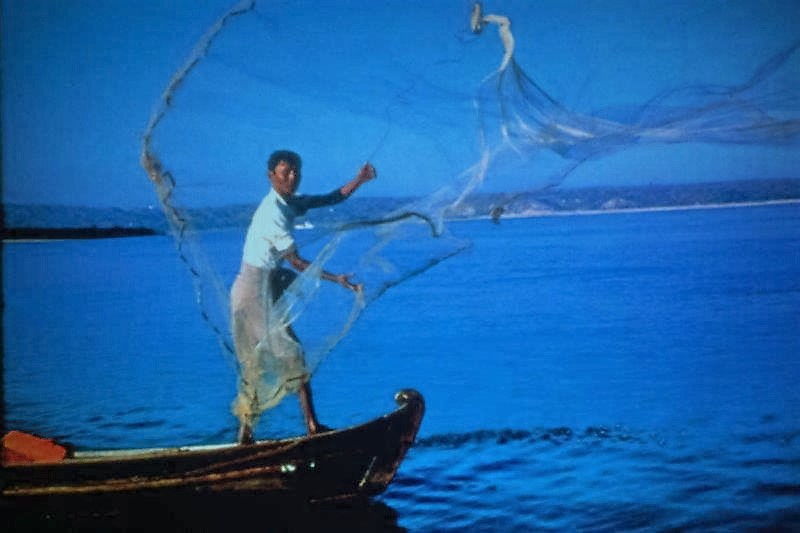 Fishing is one of the main economies of Myanmar and people prefer fish to fish on the whole. 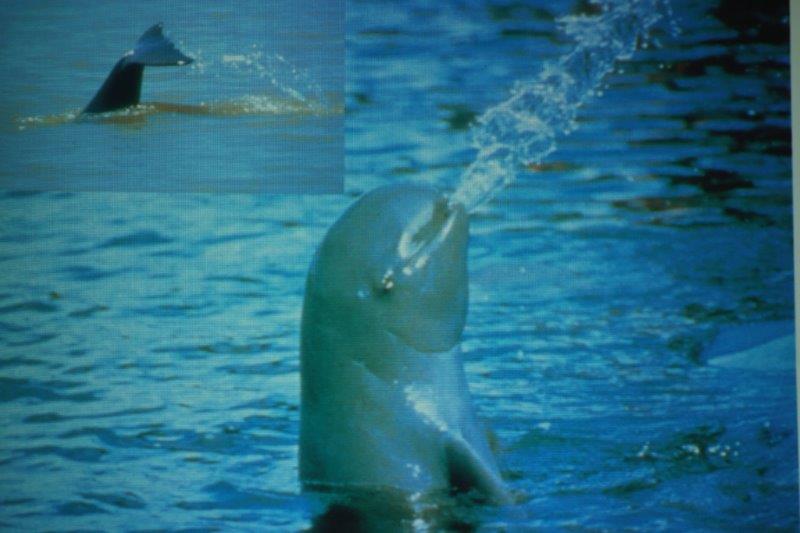 The fishermen develop a strong relationship with the dolphins and always start by feeding fish to them. When they are ready to fish for themselves, they tap on the side of the boat and the dolphins herd the fish towards them. They sell their fish locally in the markets and make quite a good living. 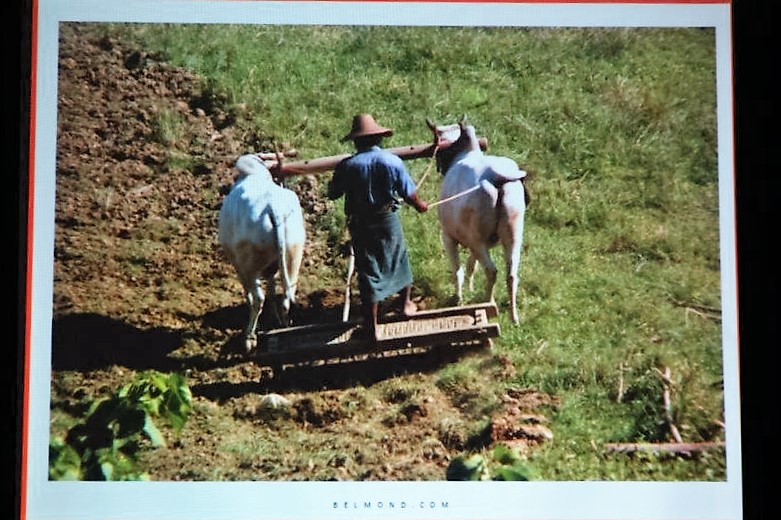 Farming provides a high proportion of the nation’s wealth but it is still carried out in what we would consider a very way. Their ‘beasts of burden’ are very important to them and are well cared for. 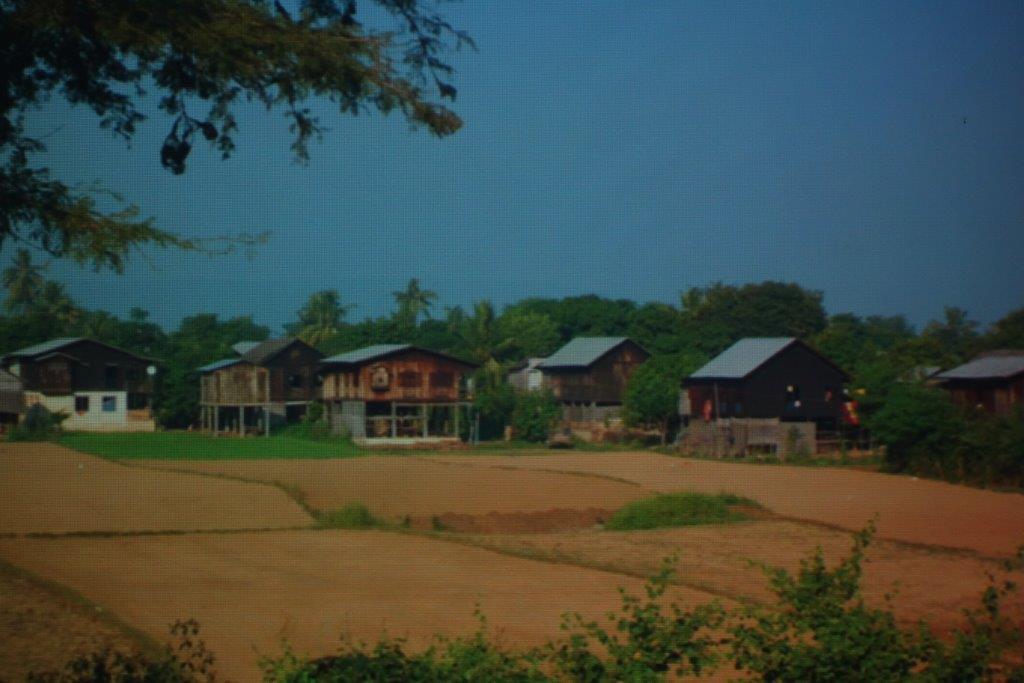 Although we saw no evidence of this sort of layout in the villages, Thet told us that this is a fairly normal layout in the farming community. 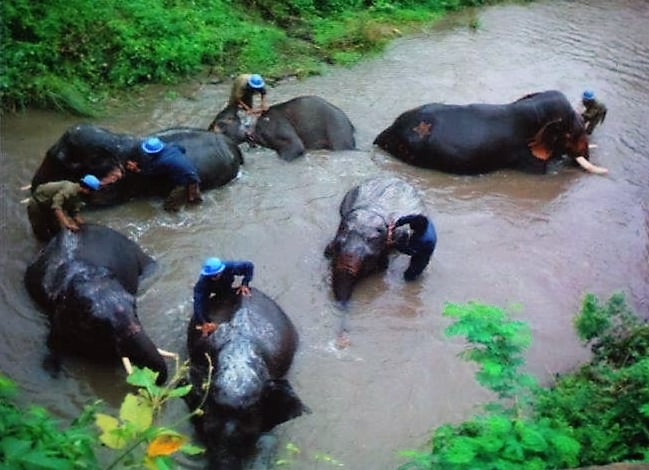 Lumber is another main product of Myanmar and elephants are critical to its success. Elephants live to about 80 and are strong enough to work from about the age of 18. They develop early relationships with their handlers who take the greatest care of them, washing them every day and touching them all over their bodies. If they get wounded in any way, the elephants are able to indicate where they ‘hurt’ and the handlers can help.

As you’ll have noticed from previous blogs, the capital city of Myanmar has changed quite frequently over the centuries. The current capital is Nay Pyi Taw (pronounced ).