On 22 May, Julie very kindly met me at Heathrow and helped me transport my luggage on the Connect to Paddington Station where Kate met me in the car while Julie returned to work. This was the start of a busy couple of months, visiting friends and family around England and returning to 'my' London base in between. 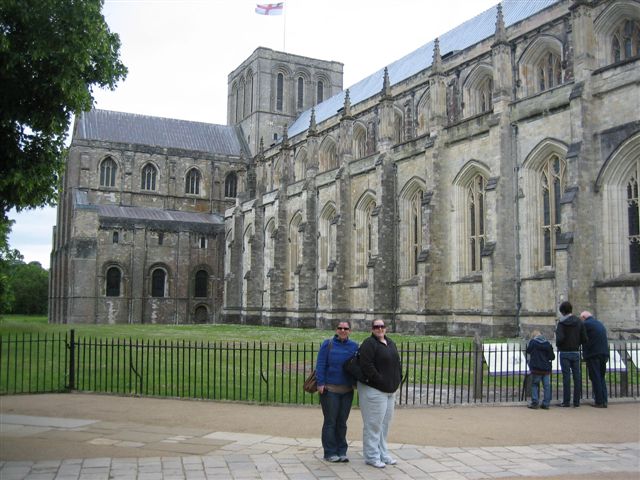 In late May Julie, Suzi and I decided to explore parts of the New Forest for a few days. We drove to Winchester first, walked through the beautiful Cathedral and saw the 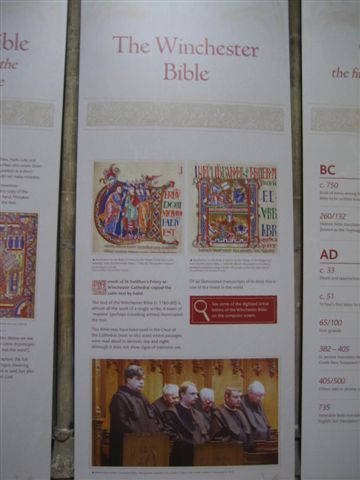 wonderful Bible which I’d visited before when I was staying with Bub a few years previously. Curiosity satisfied we made our way to the lovely village of Burley for the night.

The next day we set off to visit a variety of towns, like Fordingbridge, on the west side of the New Forest and then on to Hurst Castle. 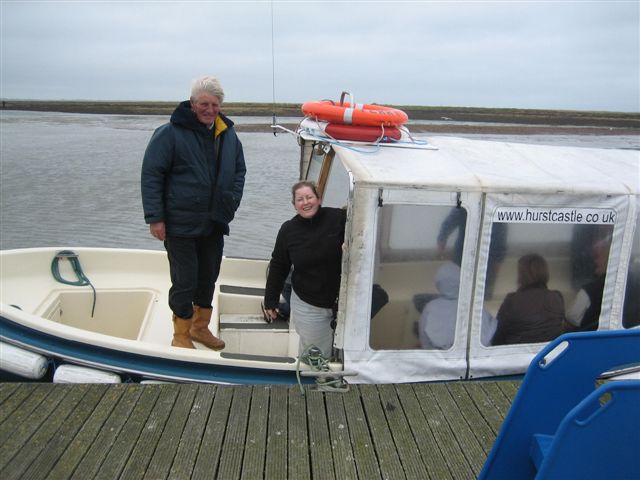 It was bitterly cold but we braved the wind and sleet and took the ferry across the water and then walked out to the lighthouse. 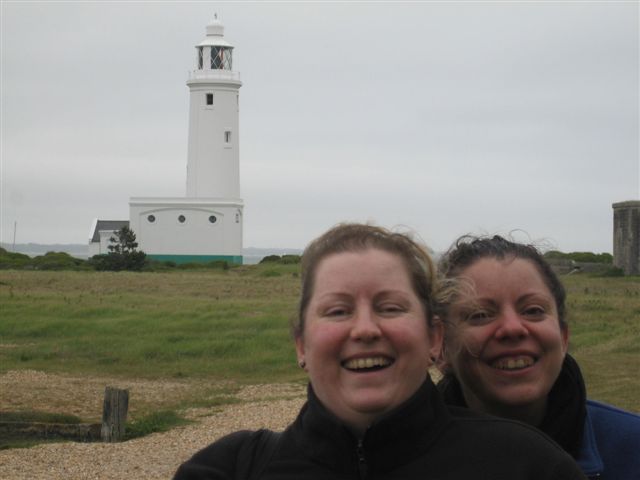 The coasts of Hampshire and the Isle of Wight, with their sheltered anchorages and good landing places, have always needed protection against invasion. Medieval Southampton was one of the most important trading towns in England with an extensive trade with the Continent. Portsmouth was later to become a great naval base. 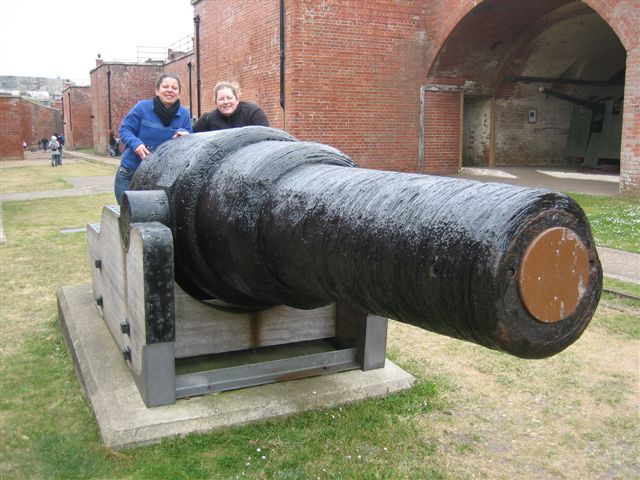 By the sixteenth century, guns were sufficiently powerful to be able to destroy the high walls of medieval castles and towns.

In the early 1530s, Henry VIII severed allegiance to the Roman Catholic Church and suppressed the monasteries, earning the enmity of the Catholic powers of Europe In 1538 there was a real danger of an invasion of England. Hurst Castle was completed in 1544. 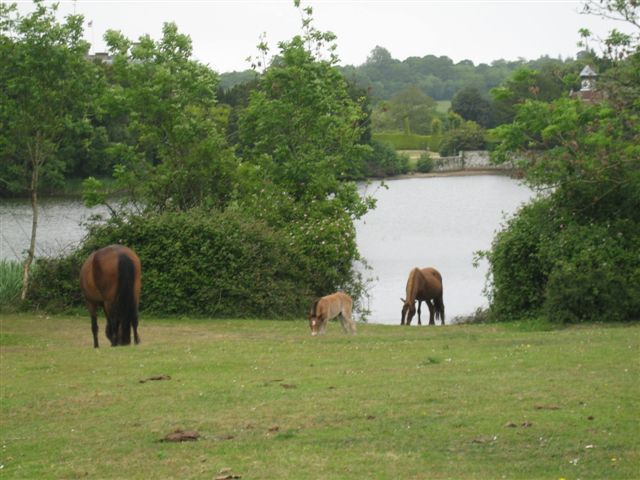 By the end of that excursion we were really glad to head for somewhere warm to have dinner. We passed lots of picturesque places 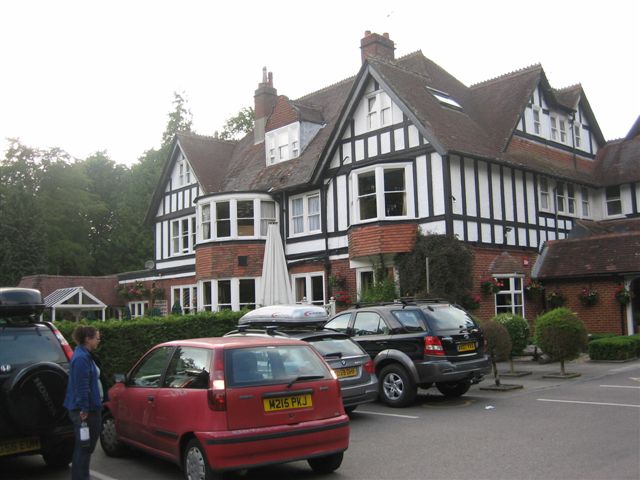 And finally ended up at The White Buck Hotel where we enjoyed a lovely dinner and warmed up. 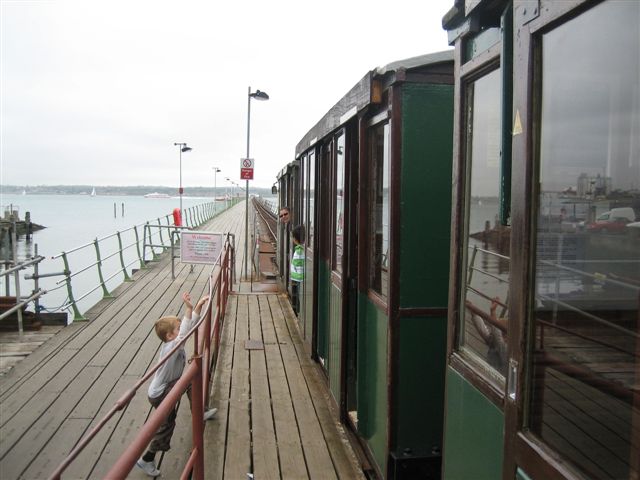 After breakfast the next morning we set off to visit Exley and Hythe where we took a little train out along the pier, just for the experience.

And then it was time to put Julie on the train at Southampton so that she could return for work the next morning. 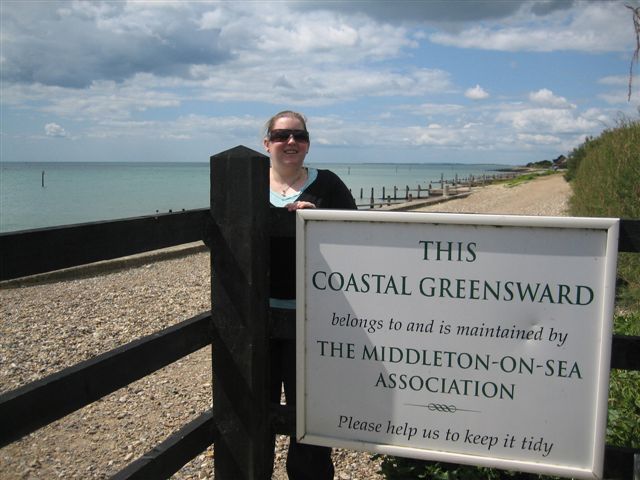 Suzi and I spent the afternoon in a mall where she bought some shoes, had an early night and set off the next morning for a few days in Sussex.

We made a detour via Middleton-on-Sea on the way to visit Jen and Colin in Shopwyke. This was where my paternal grandparents had lived and I hoped that Suzi would remember it, even though we’d emigrated to New Zealand when she was only two. Unfortunately, she didn’t! 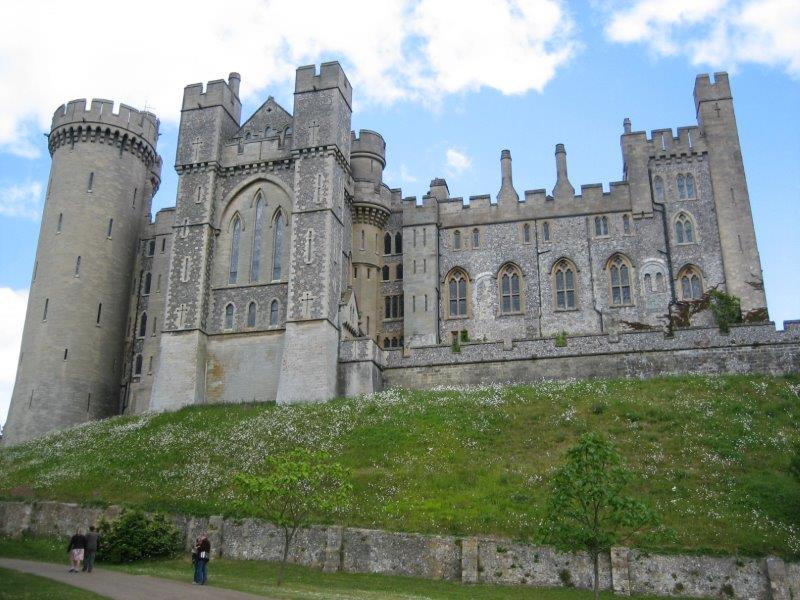 Still with half a day to spare before we were expected I took Suzi to Arundel Castle, another haunt of ours when I’d been growing up. This is a beautiful castle. 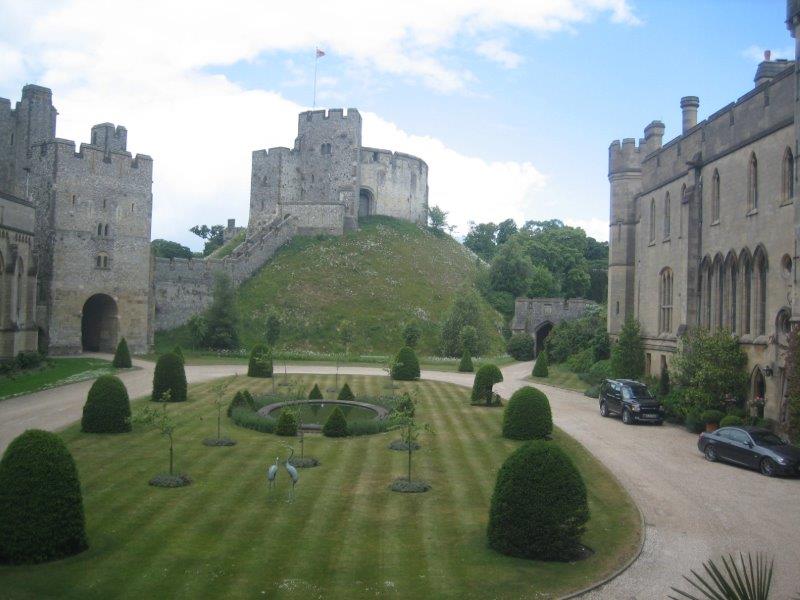 Entry is very expensive but covers the Castle and the grounds. Unfortunately, we only had time to see the Castle itself and it wasn’t possible to pay half the entry fee for half the experience. We thought this was a pity. 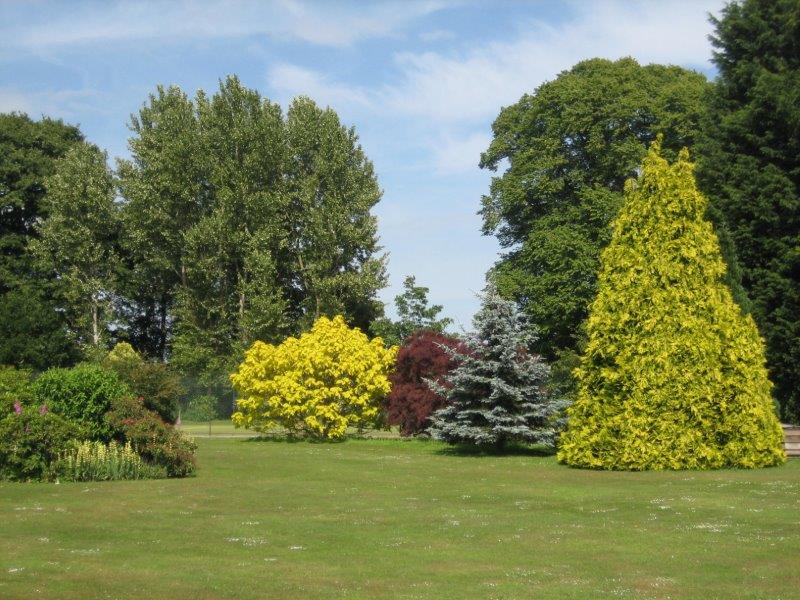 As usual, it was a delight to be with my lovely relatives in their very special environment with the trees in the garden looking magnificent as ever. 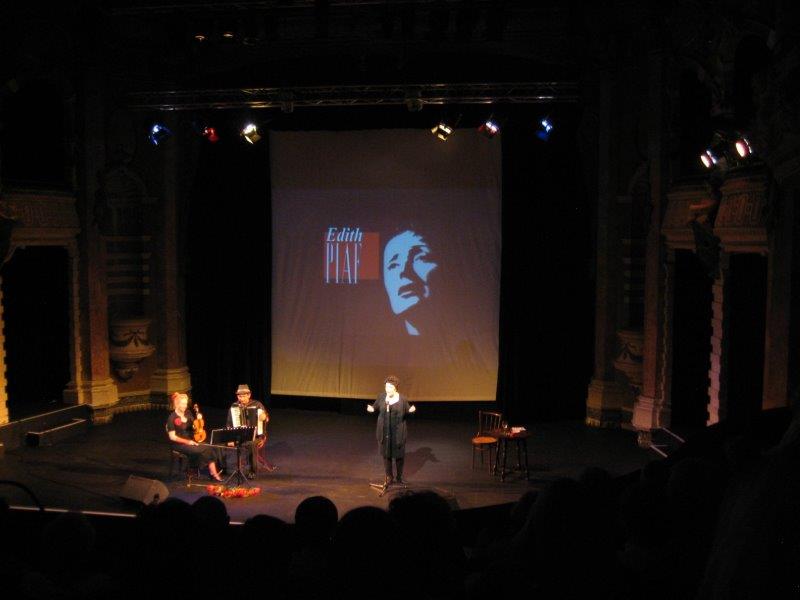 Suzi soon had to go back to work too but I had a little more time to enjoy some more visits from Robin, and Jules, my cousin and, to my delight, a wonderful evening treat to an evening with Edith Piaf at Portsmouth Theatre where my cousin, Caro, is the Director.

The star of the show sang with such an authentic French accent that I asked her in the interval if she was, in fact, French. She laughed and told me she was Welsh but had spent her childhood in France. What a combination!

And so it was back to London the next morning but only briefly. On 4 June I set off by train to Moreton to spend a few days with Tony and Janet in Gloucestershire. 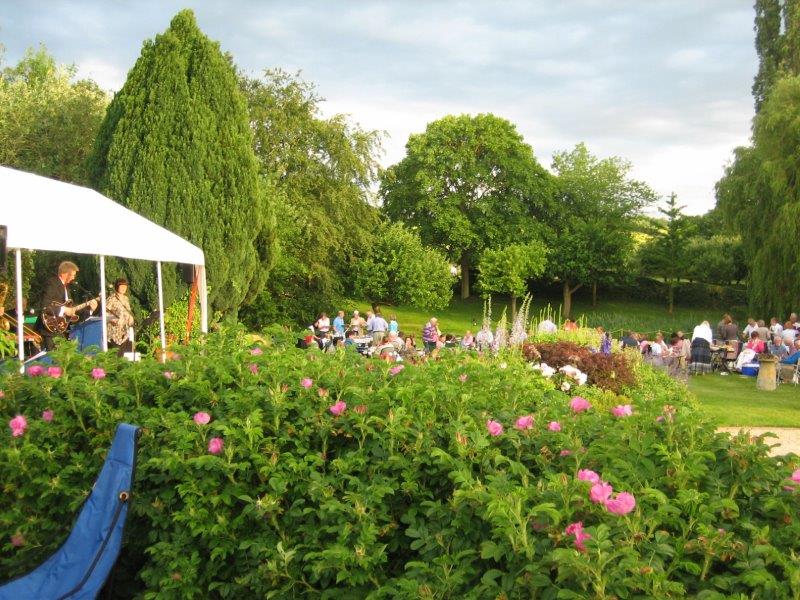 There had been vandalism on the line so the journey took four and a half hours which was boring, but Tony was there to meet me and we had time to catch up before they took me to a great outdoor jazz concert in the village. It was a great occasion only marred by the fact that it was bitterly cold. 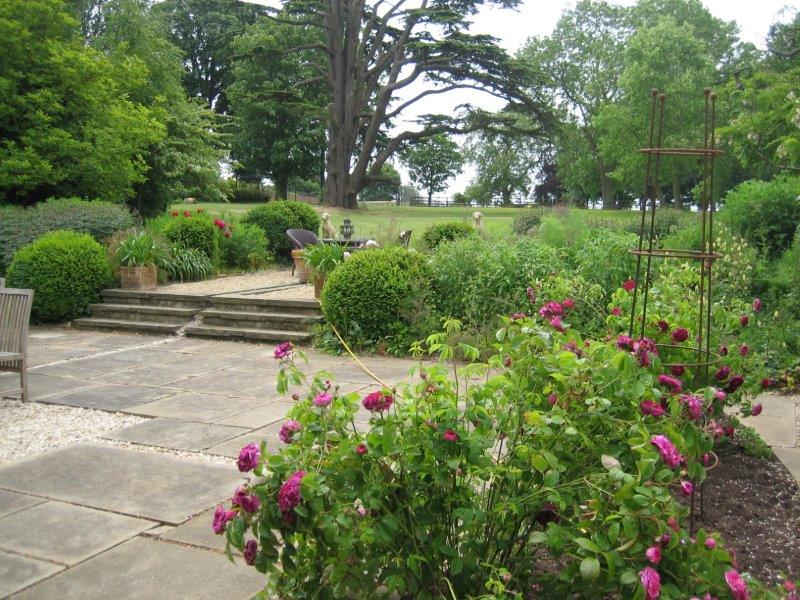 The next morning we visited Sarah and Rupert, Tony’s youngest and family and enjoyed a stroll round their lovely garden and having fun with the children.

Janet spends so much time in the garden that it was an opportunity the next day to visit the garden centre and invest in a sprinkler system to avoid some of the watering time. 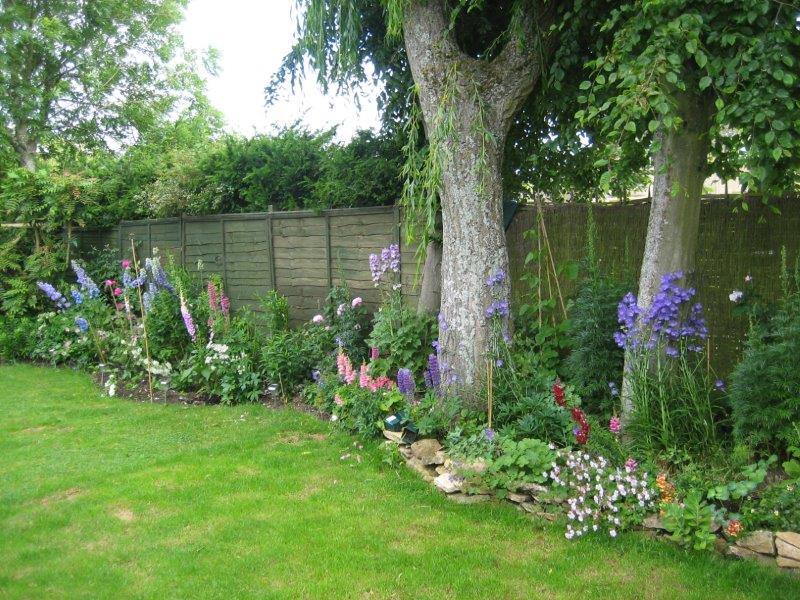 The rest of the day was spent installing it with much merriment, winding it in and out of the delphiniums and dahlias so that it was barely visible. We finally fell into bed early after a lovely moussaka dinner.

And so it was time to return to London. While I’d been away, Kate, Bret and the girls had gone on holiday to New Zealand and Thailand and had left me in charge of the house which was a real treat. It turned out to be a very social couple of weeks.

Amanda came for a visit and we went out to dinner together. Elissa also came for lunch and chats. I met up with my old 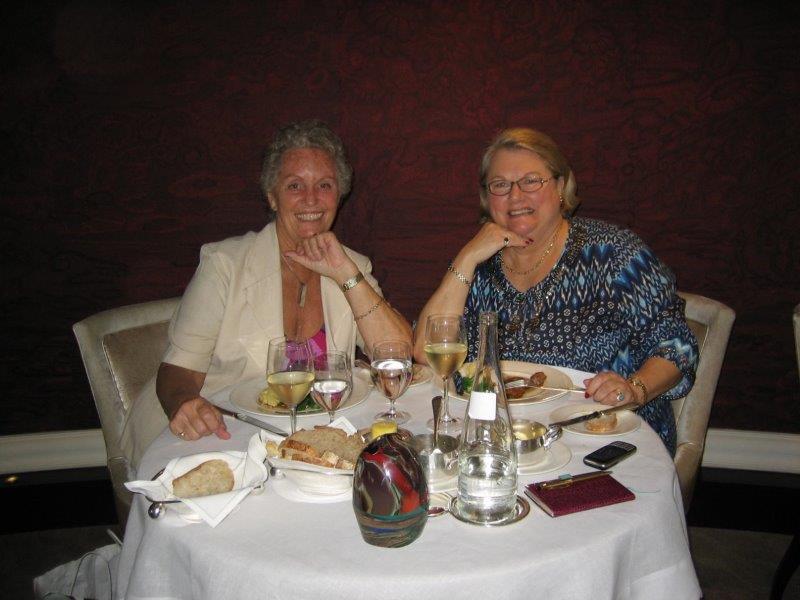 mixed doubles tennis partner of the 60s, James, and we went out to dinner together. My very good friend of almost 50 years, Tricia, took me out to lunch at Petrus which was a huge treat. We’d met at my first ever full-time job where we worked closely together, and had subsequently been on a very adventurous holiday to Italy – but that’s another story! 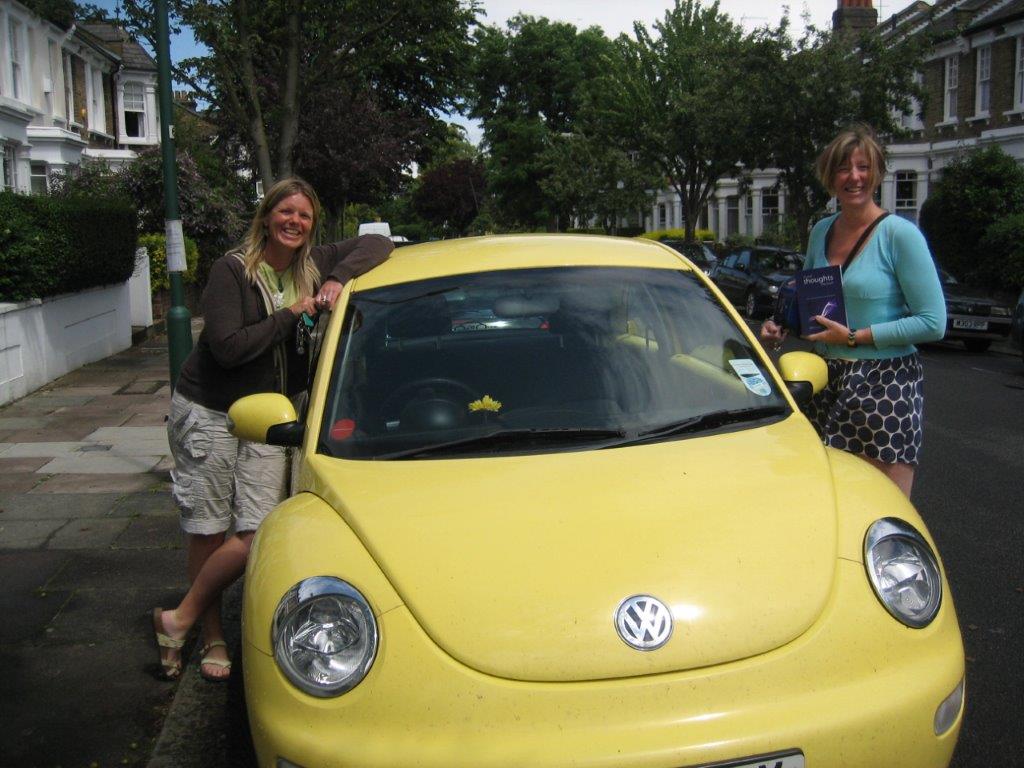 And the children’s old babysitter from the 70s, Michele (on the right), came for a visit with her younger sister, Annette, in Annette’s pride and joy, Bernie! We had a lovely afternoon together.

And there was plenty of time to spend with Julie and Suzi in between all the other visits.

Kate and family came back safely on 20 June and it was great to catch up with all their news.

They’d barely returned before I set off, yet again, this time for the annual Sherborne tennis team reunion, at Pip’s in Hampshire. Bub got held up on the way down but Mike managed to capture the rest of us ‘for the record’ as yet another year passed by and we really enjoyed each other’s company. 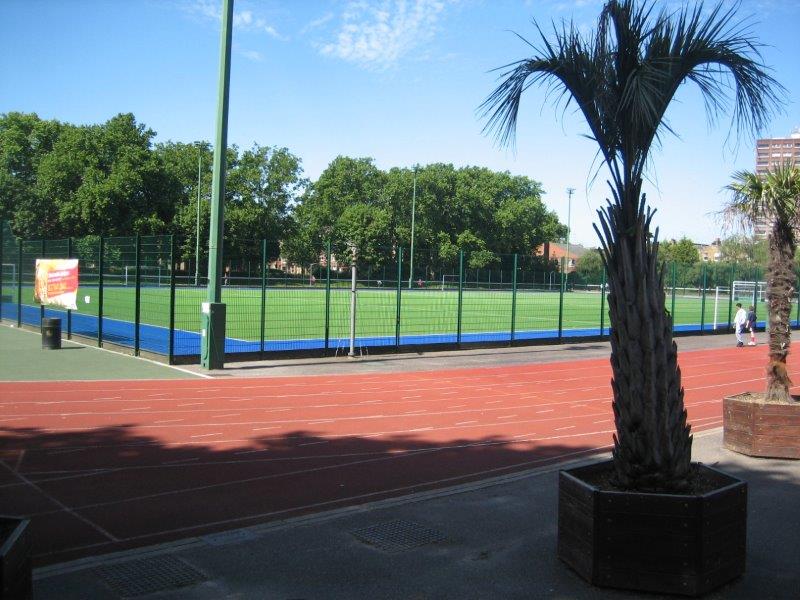 And so I spent the rest of my holiday based in London where the family and I enjoyed swimming lessons (the girls had improved no end), 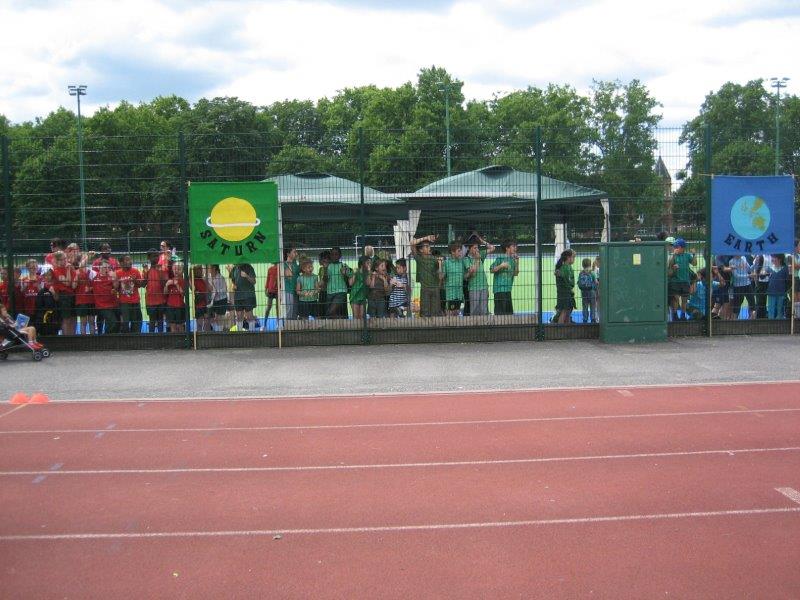 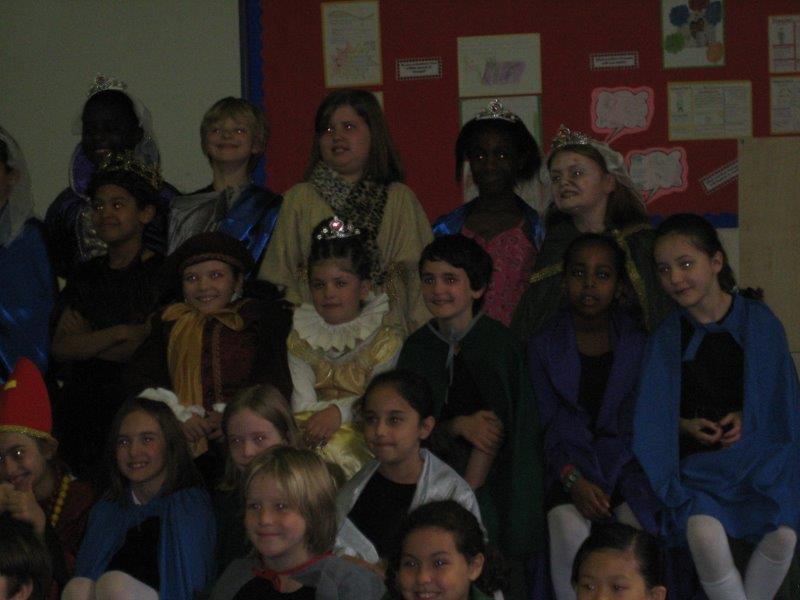 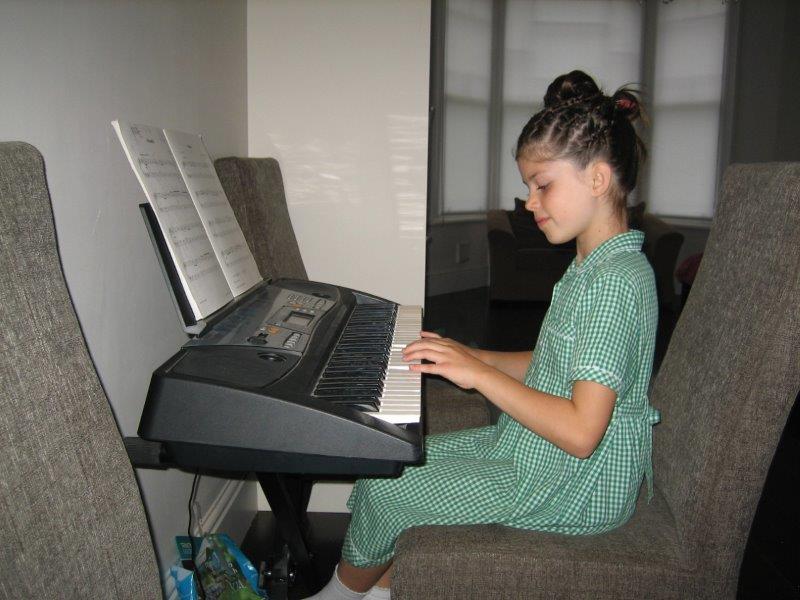 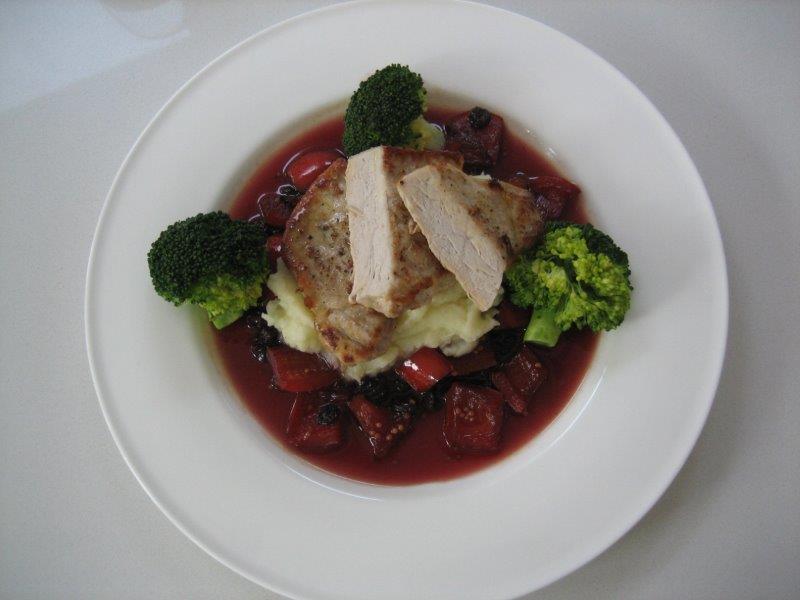 and Kate’s stunning cooking which sometimes made me wonder if it was she, or Gordon Ramsay in the kitchen!

Where the girls would eventually go to school was something that was causing Kate and Bret some concern so we went back down to Sussex to check out Westbourne House, the school which Colin and Jen had run for so many years. Of course, it’s so wonderful with so much on offer at Westbourne House that any alternative will have trouble matching up. Unfortunately, however, it won’t work for the girls because it’s much too far 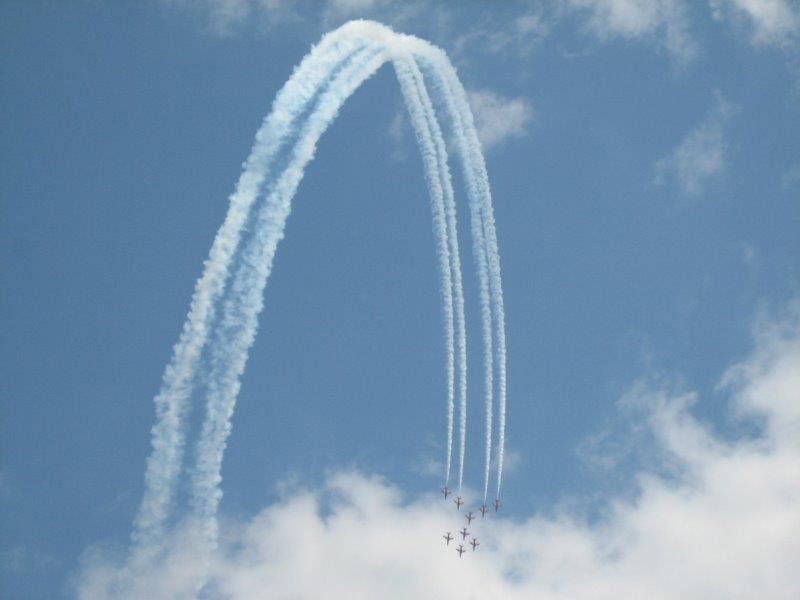 But it was a real treat for the girls to experience a show the Red Arrows who just happened to be carrying out their annual display at Goodwood. 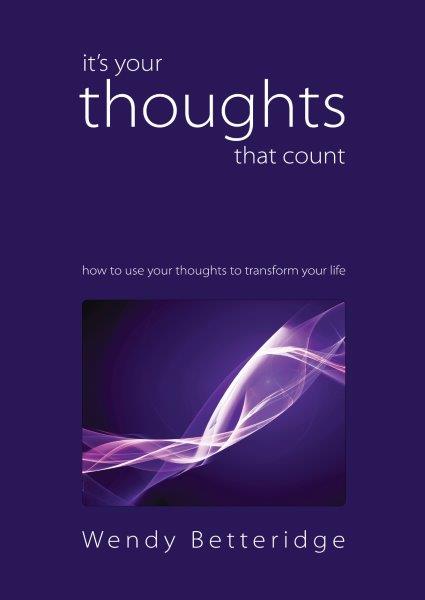 Back in London, I received the exciting news from the Ashton Wylie Memorial Trust that my book has been shortlisted for an award to be celebrated in Auckland on 19 November. I can hardly believe it and now look forward to hearing the judges’ decisions.

And so it was time to return home to the long-awaited hip replacement operation on 4 August. Just yesterday I was told by Qantas that they’d like to change my flight time and when I said I wasn’t very happy because of my time in Singapore with Adam and Janice, they offered to upgrade me to Business. What a difficult decision!

The girls had been pretty sick for the final week and Kate and I both woke on the last morning with sore throats. I hoped it wouldn’t affect her too badly with so much to do in the school holidays, or delay my operation. Fortunately, neither eventuated.

Kate kindly drove me to Paddington and Julie came all the way to Heathrow with me to help with my bags. What a lucky Mum!