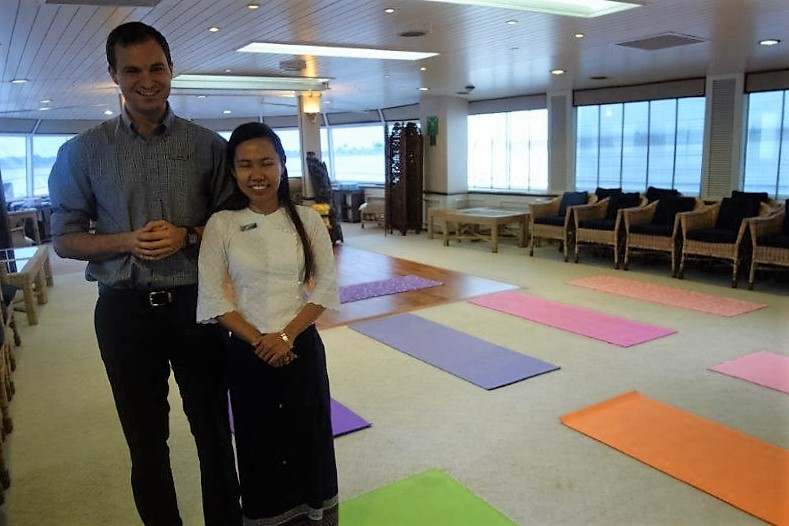 Another very early start, this time to attend a seminar about mediation with Yi Mon at 7.00 am. I’ve tried meditation in the past and am not at all good so this was a great refresher course and I shall be (at least that’s my intention) to see if I can become better.

Assistant Manager, Ben prepared the room for us and Yi Mon led the session. All of the ship's staff are unfailingly helpful and charming and are always ready to please. 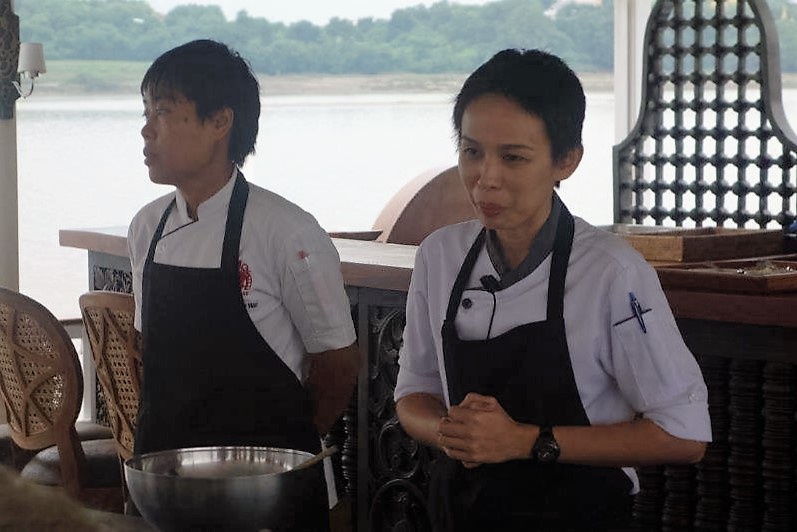 After breakfast, our next adventure was a cooking demonstration from the chef who showed us how to prepare and cook La-- salad, Burmese Green Tea Leaf Salad and Tom Yum Goong – spicy clear Thai prawn soup.

Both were absolutely delicious but the ingredients were so special as well as specific that I’m not sure I could ever replicate their excellence, however hard I tried.

We continued to cruise north up the river, passing Mandalay on our left.

Later on in the morning, the ship’s doctor gave us a sobering presentation on the work that the Belmond Road to Mandalay supports in releasing him to run free clinics within the monasteries and they provide goods and services both to poor people, orphans and those who have been seriously affected by the frequent cyclones. 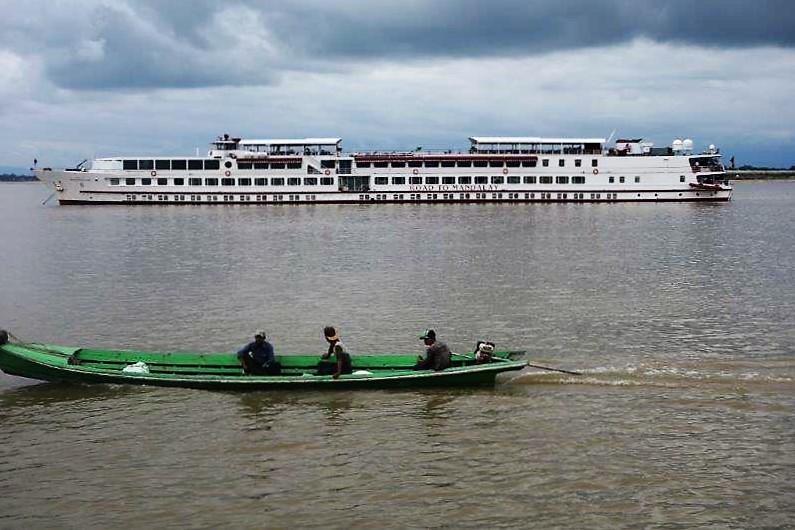 Then it was time for lunch (more food?) before our afternoon walk into the city of Mingun, north of Mandalay. 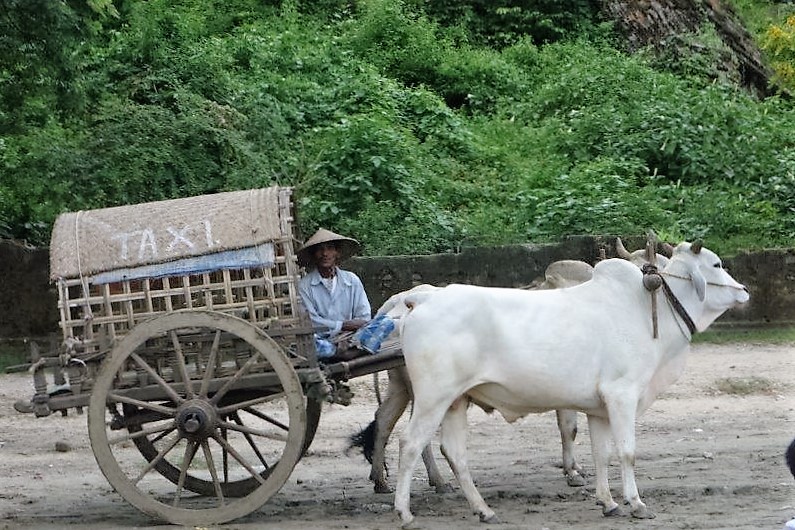 Leaving the Road to Mandalay moored in the middle of the river, we were ferried across to the far bank where these delightful taxis were lining up.

Attractive and unusual though they were, we walked instead to the Unfinished Pagoda.

Construction of the massive pagoda was ordered by King Bodawpaya, the 6th King of the Konbaung dynasty. The King who was at the peak of his power achieved a number of great successes at the end of the 18th century. The building of this pagoda began in 1790 but it was never finished and was then badly damaged in the earthquake of 1838. The massive , also known as the Gyi Pagoda, the Mingun Pahtodawgyi, and the Great Royal Stupa makes for an impressive site on the banks of the Ayeyarwady river.

In 1784 the King invaded Arakan and seized the capital city Mrauk U. Among other treasures, he seized the Mahamuni Buddha image, Burma’s most highly venerated Buddha image, and brought it back to his Kingdom. He also acquired a sacred Buddha tooth relic, something that his predecessors had not been able to achieve. To enshrine a Buddha relic of such great importance, the King wanted to build the largest pagoda in the country and probably in the world. He intended the pagoda to be 152 meters high. The impressive scale of the Paya was probably also meant to serve as a demonstration of his power. 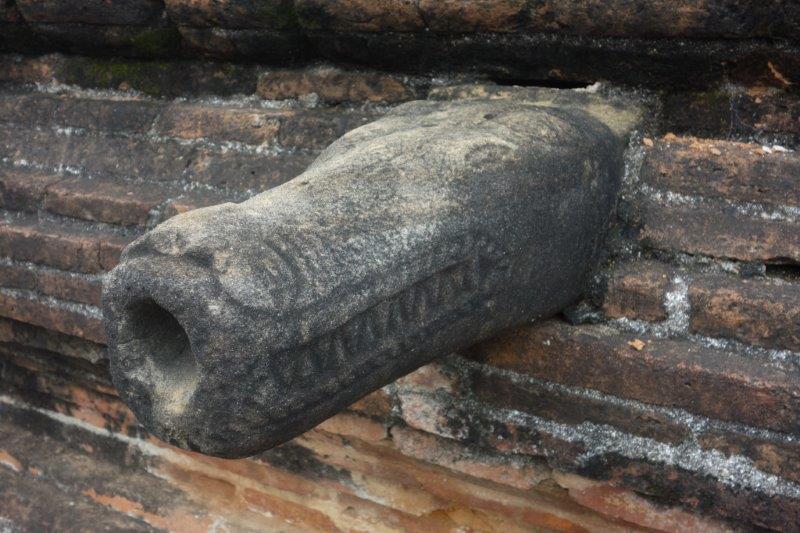 The pagoda was of such great importance to the King that he left the matters of state to his son and had a new residence for himself built on an island in the river to oversee the construction project. All around the four walls are alligator heads which drained the water from the higher level.

In 1797 when the pagoda had reached a height of 50 meters, one-third of the intended height, construction was halted. There were probably several reasons why work on the project stopped. Because of the massive size of the pagoda that was meant to be much larger than anything else in its time, it is likely that there were technical difficulties with the construction. Another problem was insufficient labour because many of the slaves brought over for the construction project escaped. 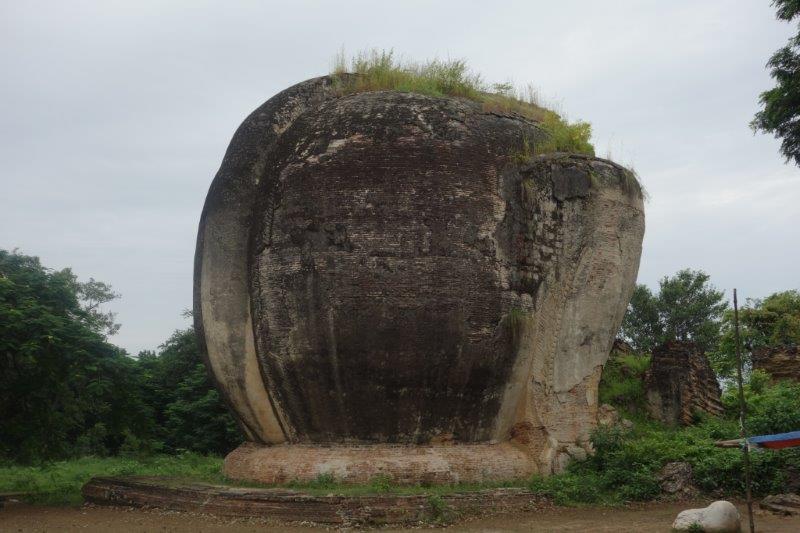 In front of the pagoda facing the river are the remains of two giant Chinthe lions guarding the temple. They didn’t look much like lions but they had apparently also been damaged in the earthquake. During the 1838 earthquake, the heads of the giant Chinthes broke off and rolled into the Ayeyarwady river. 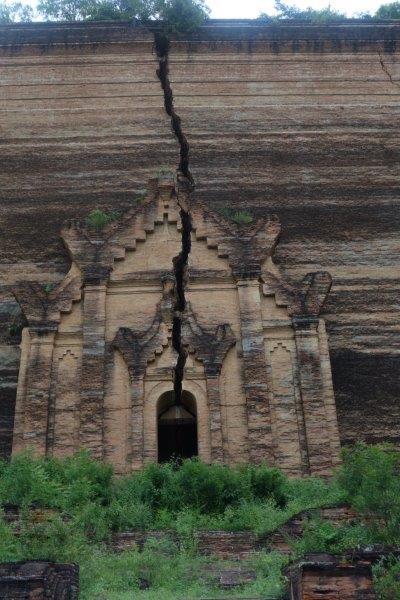 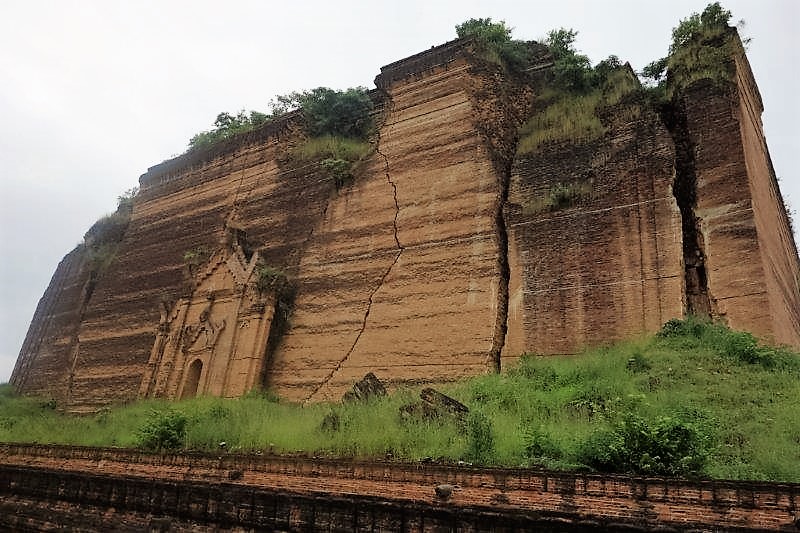 to an end, which may have led to a deliberate slowdown. It is also likely that there was insufficient funding to complete the pagoda, because of economic problems at the turn of the century. When the King died in 1819 the project was indefinitely halted and none of his successors resumed the work on it. 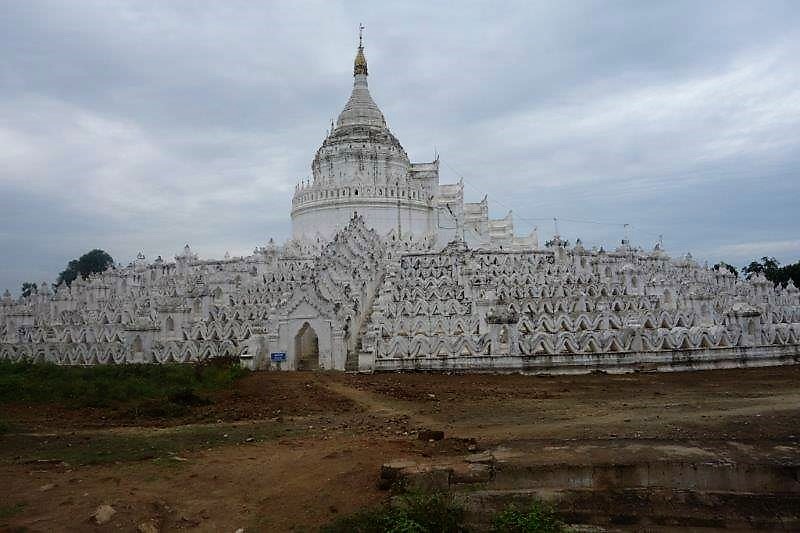 Just a couple of hundred yards from the great stupa and bell lies the beautiful white Hsinbyume or Myatheindan Pagoda with a distinctive architectural style modelled after the mythical Mount Meru (Myinmo taung). It was built in 1816 by Bodawpaya's grandson and successor, Bagyidaw, and dedicated to the memory of his first consort, Princess Hsinbyume, (Lady of the White Elephant, granddaughter of Bodawpaya, 1789–1812) who died in childbirth.

This whitewashed pagoda with a golden spiral on top is nearby on the bank of the river and is a model of what the Great Paya was meant to be. 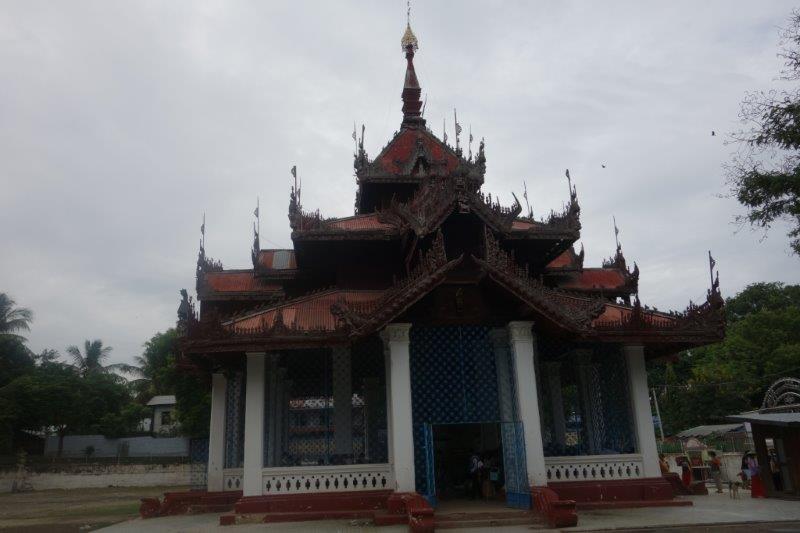 In 1808 King Bodawpaya had an enormous bell made that was meant to be installed at the top of the giant stupa. The bell is housed nearby the Paya in a Zayat, an intricate Burmese style pavilion with a multi-tiered roof. 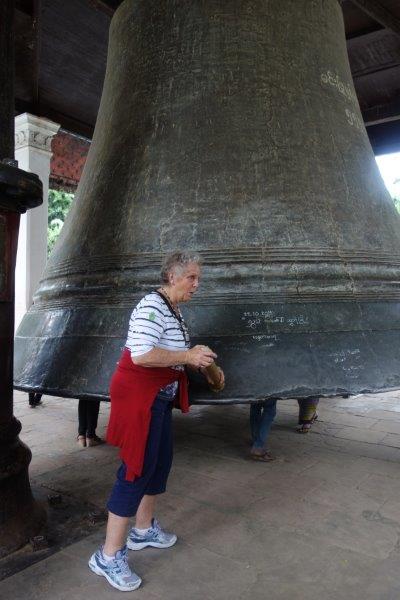 The Mingun Bell was cast from 1808 until 1810 by King Bodawpaya to be dedicated to the Mingun Pagoda which was never completed and is now in ruins. It is almost 4 meters high and is the largest working hanging bell in the world. The number 55555 is inscribed in Burmese script on the outside of the bell, 55555 being the weight in viss, a Burmese unit of measurement, which is about 90 tons.

It is one-third the size of that in Moscow and fourteen times that of the one in St Paul’s Cathedral. Its supports were destroyed by the earthquake of 1839 and it rested on the ground until 1896 when it was raised, slung on an iron beam and placed in the present building.

The bell is rung by striking its exterior with a log of wood. Of course, we all had to ‘ring it’ which we did with a small log which we banged, end on, against the bell just above the rim. It made a loud, low, melodic sound. 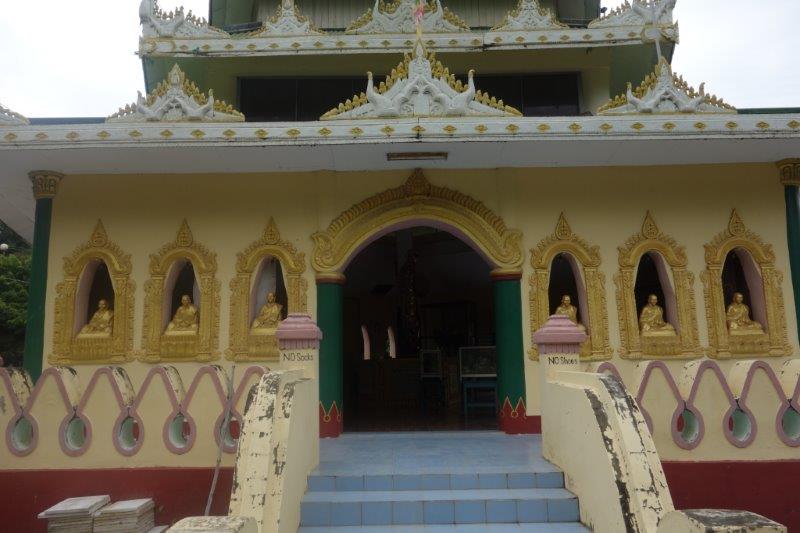 Finally, we visited the building that houses the statue of the Venerable Mingun Sayadaw, as he later became known, who was born Maung Khin in 1911 in Kyipin Village. His father died when he was only 4 years old. During his youth, he was noted for being reserved and for his cleanliness.

At the age of 5, he was sent to the village monastery according to Burmese Buddhist tradition, to get a basic monastic education. His grandfather, U Chai, taught him Buddhist prayers and recitations and it was for these that he would gain great following and fame as the Mingun Sayadaw. From the age of 5, he displayed his astonishing ability to memorise extensive texts and sat for various religious grading examinations.

In 1930 he moved to Mingun to continue his studies and from that time until his death in 1993 he was based in Mingun. In the same year, he was ordained as a monk with the support of Sir and Lady Thwin. In 1933, he was conferred with the rare title of Pahtamakyaw as he passed the Highest level religious Examination at the top of his cohort. 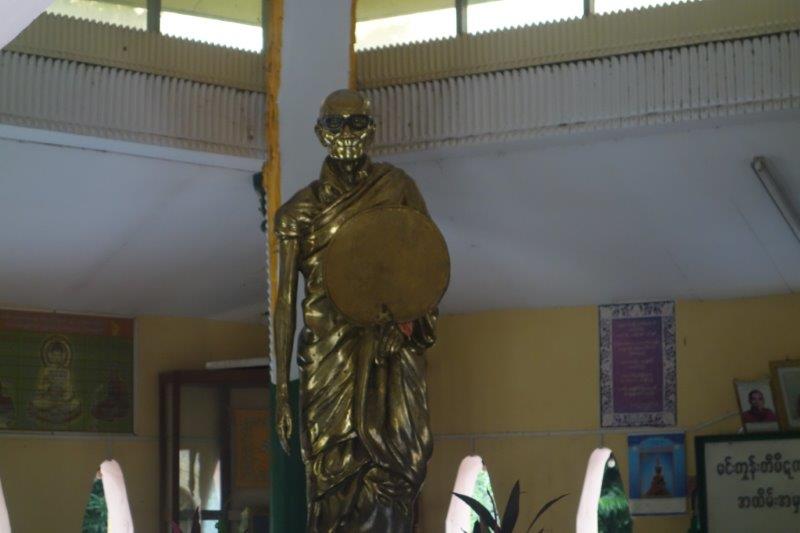 The Maha Sanghasamaggi Association, which conducted the religious exams conferred the suffix Abhivamsa to his name in 1934. Thus, the Sayadaw had gained his dharma name with which he would be renowned throughout Myanmar.

From 1950 to 1953, the Sayadaw sat and passed the state conducted Tipitakadhara Selection Examination, for which the government of the newly independent Union of Burma conferred various titles and honours. In 1953, he became the first monk ever to be awarded the title of Tipitakadhara, meaning Keeper and Guardian of the Tipitaka.

It was said that the Sayadaw recalled the exact book, page, and line of every term in the Tripitaka.

In 1985, the Guinness Book of Records recorded the Sayadaw as a record holder in the Human memory category. The exact entry was ‘Human memory: Bhandanta Vicitsara (sic) recited 16,000 pages of Buddhist canonical text in Rangoon, Burma in May 1954. Rare instances of eidetic memory - the ability to project and hence "visually" recall material - are known to science.

The Sayadaw was in his 80s when the current military government of Myanmar took power. He distanced himself from the democracy demonstrations and the 8888 movements. As the government solidified its position, the Sayadaw was approached by the government to attend its religious events, which he agreed to do.

The Sayadaw did not engage in any politics but a few radical elements of the pro-democracy movement considered him as a government lackey. However, his reputation was never tarnished as he continued his religious work until the very end.

He died in 1992 of complications from an infection. He was given a de facto state funeral, where he was sent off by a large number of fellow monks, government officials, and devotees. His ashes were then scattered over various locations across the country to symbolize the national religious figure he had come to personify.