The distance from Great Falls to Calgary is 529 km and we estimated that this would take us 6 hours without stops. 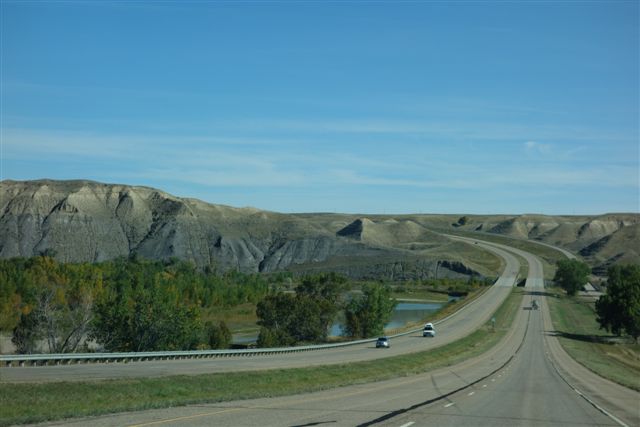 From Yellowstone, it’s pretty much due north to Calgary. The road from Calgary to the border was really long and boring but the border crossing was faster than it had been on our previous occasions, which was a relief as it was another warm day. 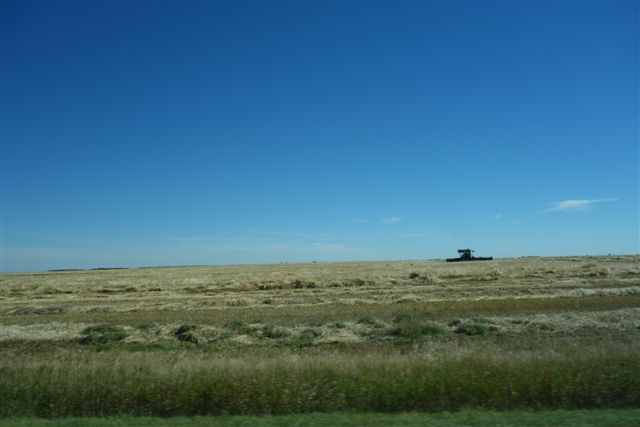 We were driving on the Trans Canada Highway 1. Our destination was Drumheller and we passed the most 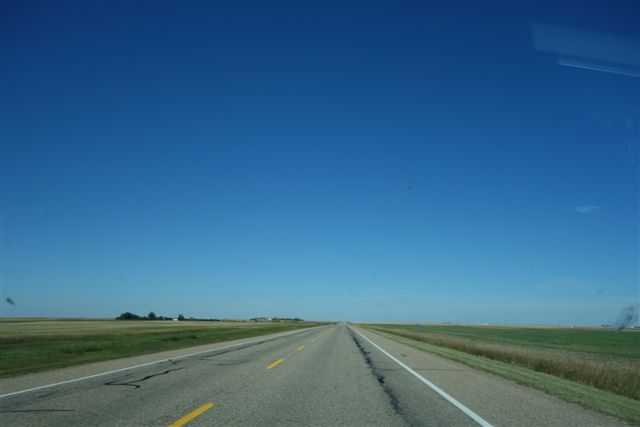 amazing scenery on the way. We thought it would go on for ever! The road was long and straight with very little traffic and all we saw on either side of the car was field after field of agriculture with huge machinery at work raising something of a mist, either of dry top 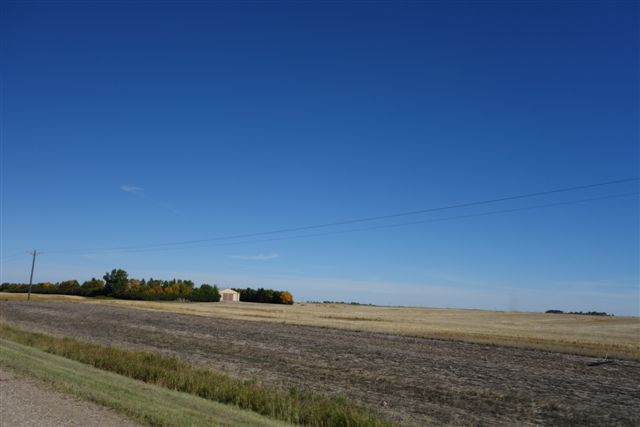 soil, fertiliser or crop dust all of which combined to create a slightly cloudy environment. Clearly we were driving through the prairies.

We wondered how people socialised because the distances between any sort of a building were so great – let alone any settlements. 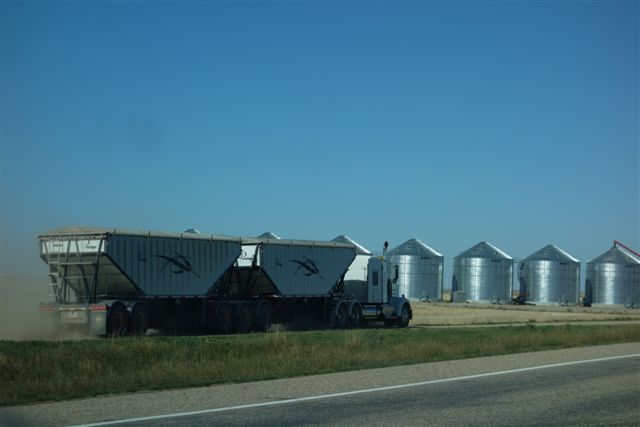 The road just seemed to go on, and on, and on for ever. 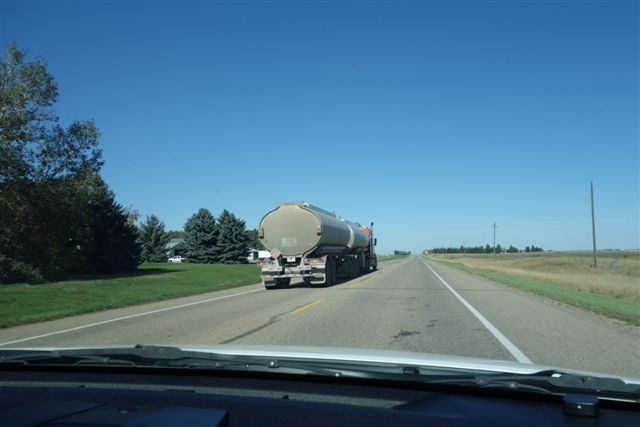 Sometimes we met enormous trucks on the road that were presumably either collecting or delivering. 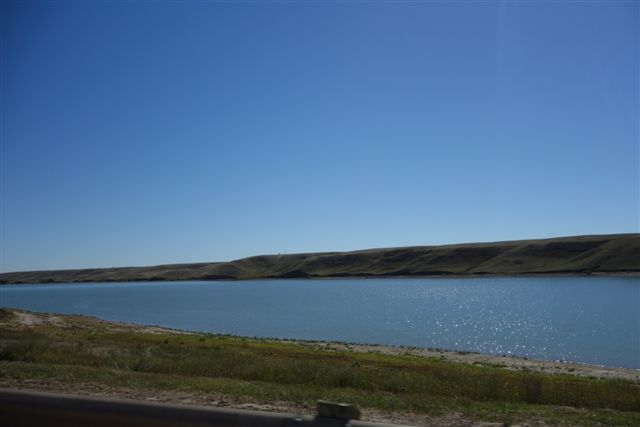 It was actually quite scary to be sharing the road with so many vehicles this size but we were getting used to it. None of them was small!

We were still travelling along beside the Missouri River some of the time, which was a welcome relief from just agriculture. 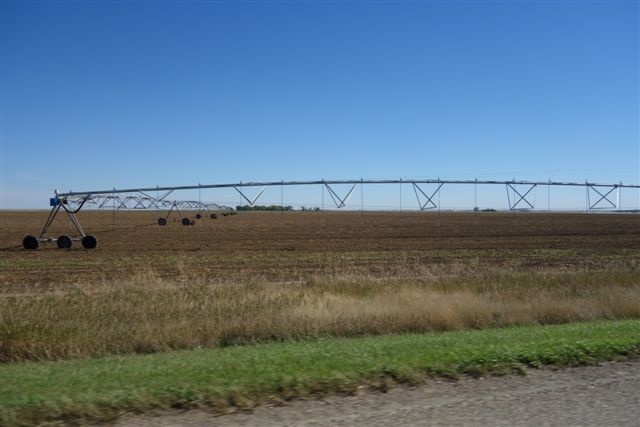 But mostly it was just fields and more fields, usually of hay, and often enormous sprinkler systems. 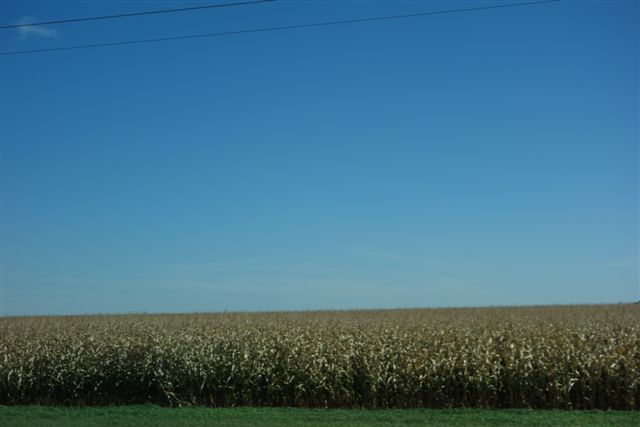 There’s oil under the ground in this area. We often passed oil 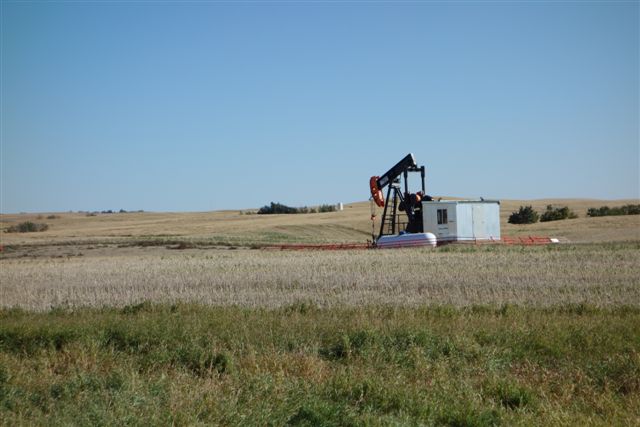 donkeys along the way. They looked so solitary and we couldn’t see how they connected to each other. We found out later from other travellers that the pipelines stretch for 400,000 miles. Mind boggling! 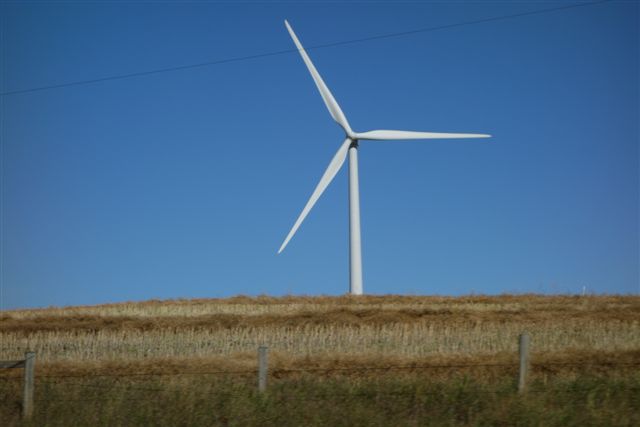 We also saw heaps of these and were glad to know that natural resources were being optimised. Having said that, when we passed through there wasn’t a breath of wind. 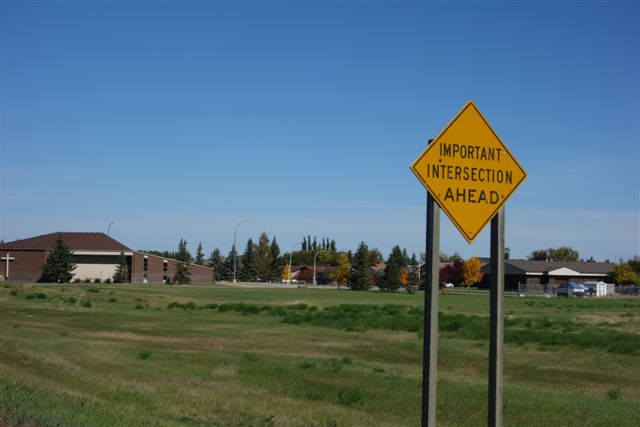 We’d met a couple from Vancouver when we were in Ottawa and they’d told us about this particular journey. They’d said that the road was infinitely boring and was interspersed with crossroads which all bore the same sign, ‘Important Intersection Ahead’ even though there was actually nothing happening at the intersections to 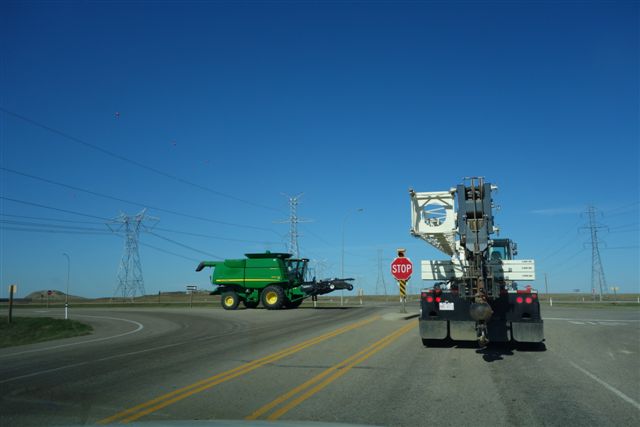 signify why they were important as you could see any vehicle on the crossing road from miles away!

On one occasion, two large vehicles did actually arrive at one intersection at the same time – although this was very rare. 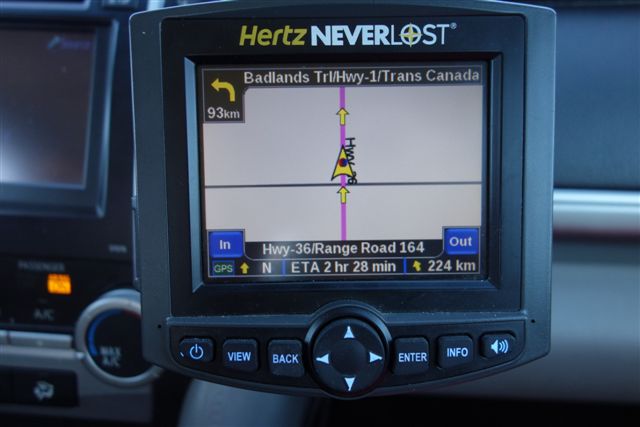 Our GPS was directing us to the Badlands Trail on the Trans Canada Highway 1. We all very much wanted to know what the Badlands were. Finally we got closer to 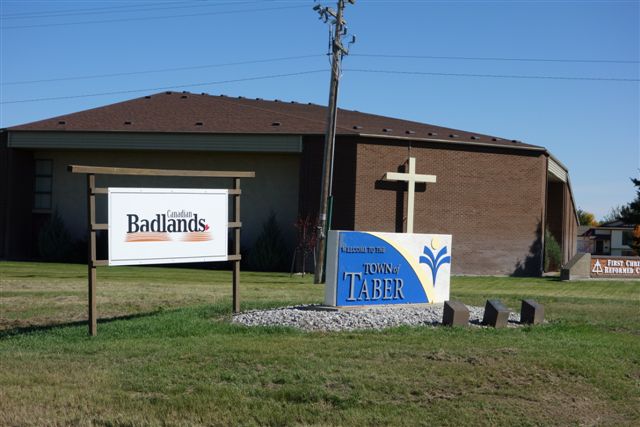 Drumheller which was to hold some treasures for us to explore.

And some of the signs indicated that we were nearly there. 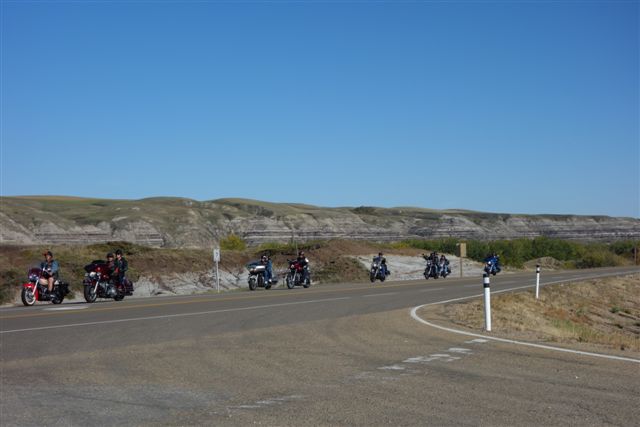 We managed to catch a quick photo of this group of Harley enthusiasts – a very common sight both in the States and in Canada. 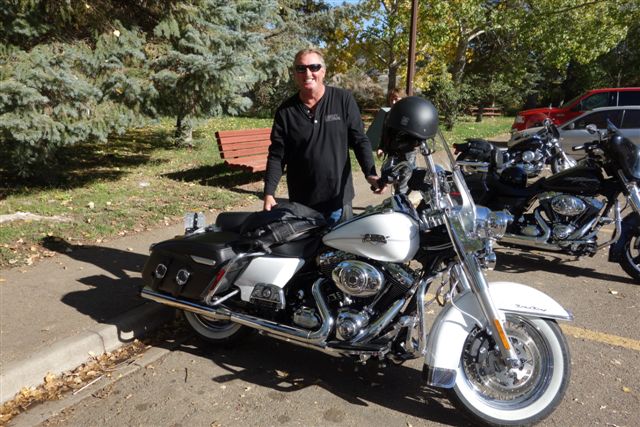 It turned out that they were going to the same place as we were because we caught up with them there and this guy was happy, not only to pose, but also to fill us in on some information about something that had been worrying us. And once we’d been given a hint, we followed up with our own investigation. 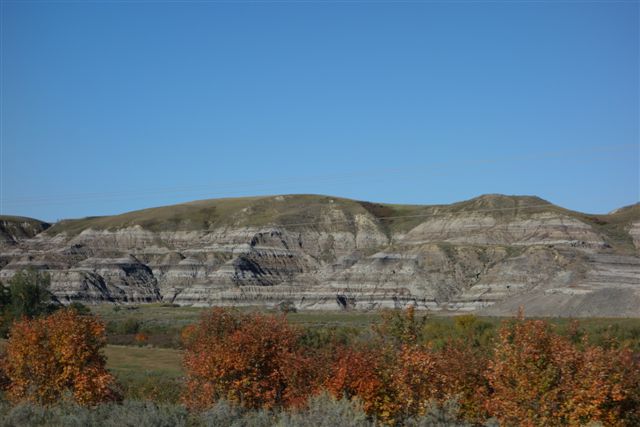 Driving, as we had, across endless golden prairies, the fertile land suddenly drops away into a strange and stark moonscape of weird striped hills and otherworldly rock formations. This is the Alberta Badlands and this is where the hoodoos come from – huge rocks that seem to form themselves into weird shapes.

Even the name is mysterious and had been worrying us because nothing looked particularly ‘Bad’. We had, of course, come across the same term in South Dakota and now we knew what it meant. 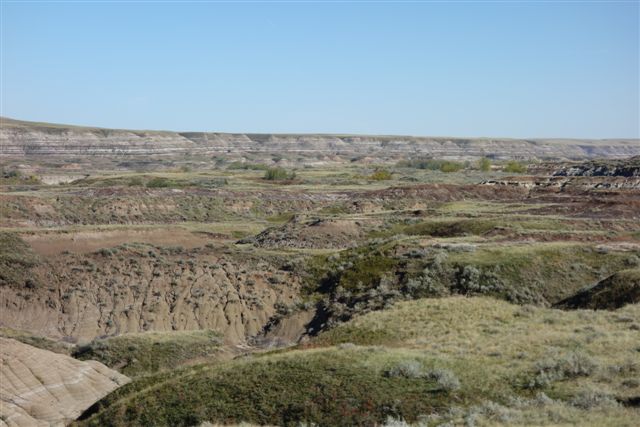 Maybe that was why we felt compelled to explore. The name related to the fact that the ground we were walking on was rife with the ancient bones of the dinosaurs who once ruled this land. This somehow kept us looking over our shoulders!

We were told that the Badlands cut a swath through south-eastern Alberta. The region has been a fossil hotbed since the 19th century and shows no sign of running out of old bones. Some of the most important dinosaur discoveries in the world were unearthed right here.

About 65,000,000 years before Sam Drumheller began promoting the 1910 town site, later named after him, the surrounding Red Deer Valley was the home of the immense dinosaurs. Fossils of the prehistoric creatures are often discovered in the multi-layered sedimentary walls of the Valley. Several life size dinosaur replicas can be seen in the town. 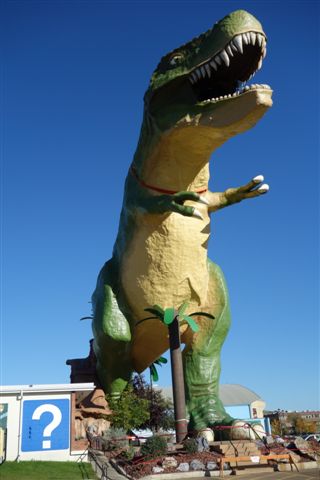 For a sweeping view of the Badlands and the Red Deer River valley, the girls climbed up inside the world’s biggest replica Tyrannosaurus Rex that has been built over the top of the information centre in Drumheller – the ‘Dinosaur Capital of the World’, and looked out over the surrounding countryside from its ‘fearsome’ jaws.

In addition to the rock formations, the Alberta Badlands contain the largest, protected mixed grass prairie in the United States. The most endangered land mammal in North America, the black footed ferret, was re-introduced to the 64,000-acres Badlands Wilderness Area.

We had, of course, already passed through Badlands National Park located in south-western South Dakota and it was there that our curiosity was first piqued. We had noticed that this park had been marked by rugged terrain and formations that resembled a science fiction landscape of another world – even without the amazing carvings that have been hewn into the rocks.

These natural rock formations take on the shapes of domes, twisted canyons and slanted walls, often striped in different colours. The formations contrast sharply with the rolling hills and prairies in which they stand.

We had one more site that we wanted to explore before we drove the rest of the way to Calgary.

Coal was not hard to discover in the area that is now Drumheller. Seams of coal show up as black stripes in the Badlands of the Red Deer river Valley. The Blackfoot and Cree knew about the black rock that burned, but they didn’t like to use it. The first commercial coal mine didn’t open until Sam Drumheller started the coal rush in the area. 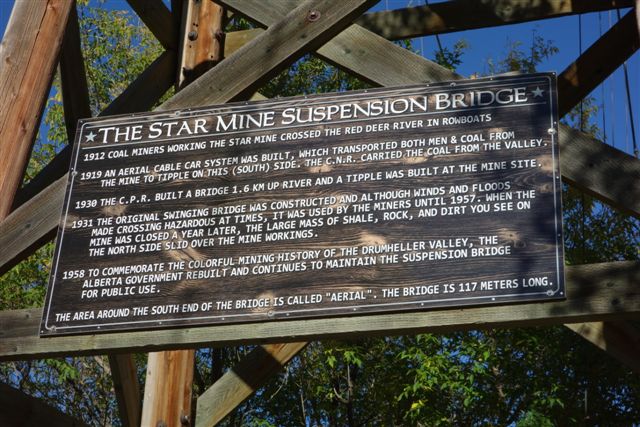 The Alberta Star (coal) Mine Bridge was erected in 1977. This sign at one end of the suspension bridge says:

In 1912, coal miners working the Star Mine crossed the Red Deer River in rowboats. In 1919 an aerial cable car system was built which transported both men and coal from the Valley. In 1930 the CPR built a bridge 1.6 km up river and a tipple was built at the mine site. In 1931 the original swinging bridge was constructed and although winds and floods made crossing hazardous at times, it was used by the miners until 1957. When the mine was closed a year later, the large mass of shale, rock, and dirt that you see on the north side slid over the mine workings. In 1958, to commemorate the colourful mining history of the Drumheller Valley, the Alberta Government rebuilt and continues to maintain the suspension Bridge for public use. The area around the south end of the bridge is called ‘Aerial’. The bridge is 117 metres long. 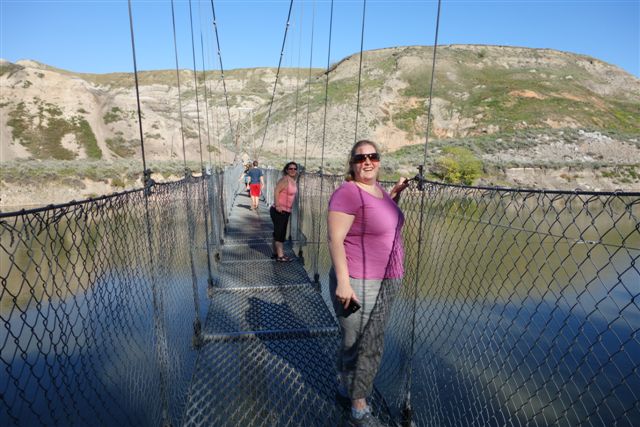 Julie and Suzi ventured over the bridge to explore the mass of rock on the other side.

And then we drove to our lovely hotel near the airport, The Holiday Inn Express Airport Calgary, 45 Hopewell Way NE, Calgary, Alberta 3G 4V7 +1 4037691888. It didn’t have its own restaurant but it was a very short walk to the Sandman Hotel close by and their restaurant called Moxie which was very large and jammed to the gunwales – with excellent food. We can happily recommend both.