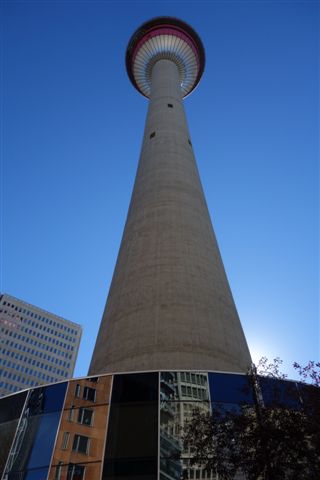 It wasn’t far from the Airport Hotel into downtown Calgary. It was (yet) another beautiful day and we didn’t want to spend too much time in a city when we had so much more ‘countryside’ to explore. We’d heard that Calgary Tower rises 191m above the city and its observation deck and revolving restaurant provide a panorama of both the city and the nearby Rocky Mountains.

So we parked on 10th Avenue and sent Julie volunteered to go up for a reconnoitre! And she did, indeed, see the Rockies in the distance. 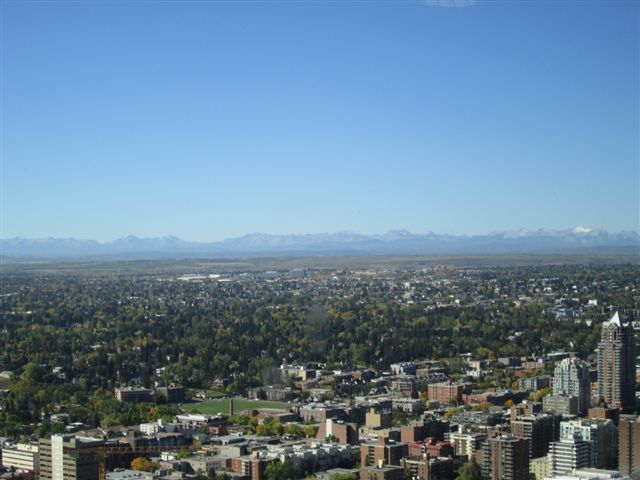 Calgary was once considered a ‘cow’ town but is now one of Canada’s fastest growing cities with skyscrapers, light rail transit and shopping complexes. 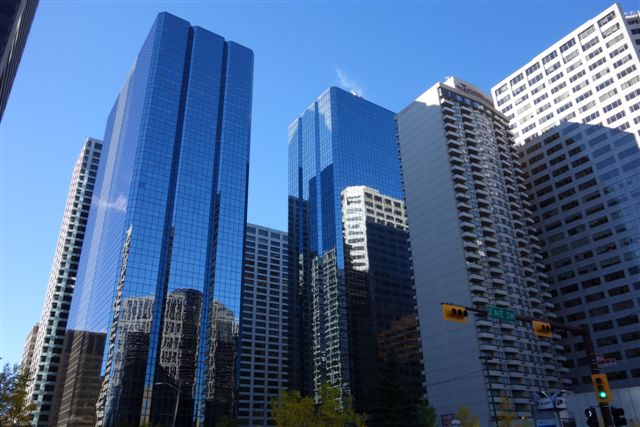 The city began with, and still includes, ranching and a consequential meat packing industry but the discovery of oil just south of the city in 1914 and just north in 1947 fuelled a spurt of growth that turned an agricultural community into a metropolis. 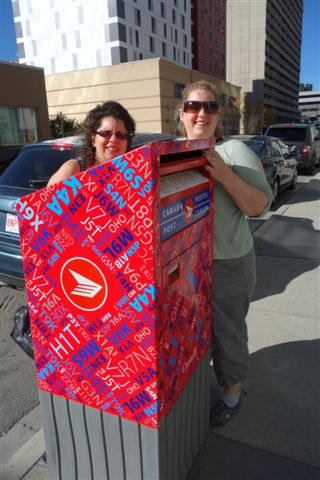 Our visit was on a Sunday and we all liked the feel of the city. The post boxes felt friendly! 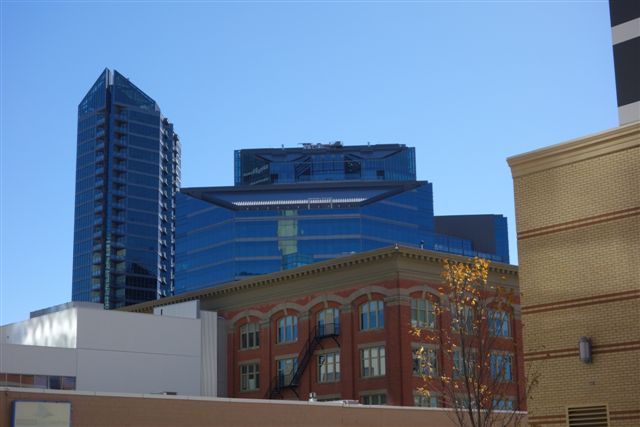 And there was an interesting mix of architecture which gave it a slightly eclectic but attractive look. 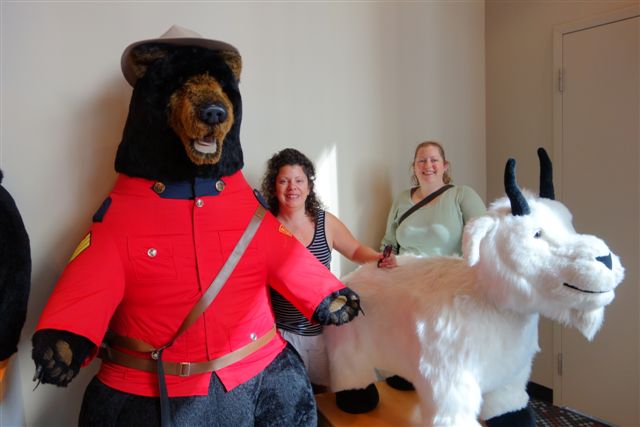 Julie and Suzi posed in the entrance to the Information Centre where we loaded ourselves up with heaps of maps and pamphlets for our journey north.

We checked into our hotel early in Canmore, south of Banff, and left our bags before we set off for some of the attractions around Banff. We can recommend Econo Lodge in Canmore at 1602 Second Avenue, Canmore, Alberta T1W 1M8 +1 4036785488. We had booked for two nights. There was no microwave but they did provide boiling water for hot chocolate at night. The staff was very helpful and the continental breakfast was fairly good. 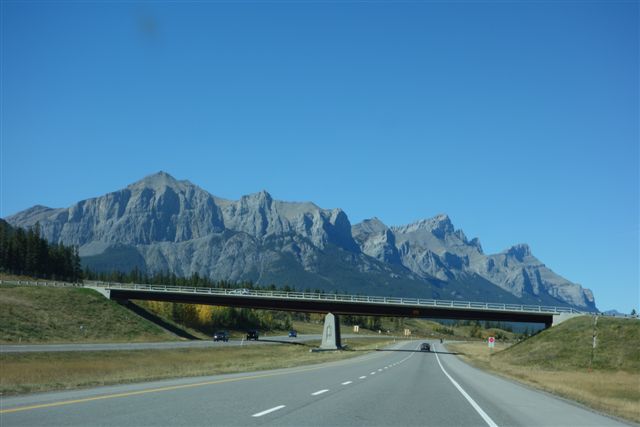 The drive along Highway 1 was immediately captivating as soon as we passed under this bridge. 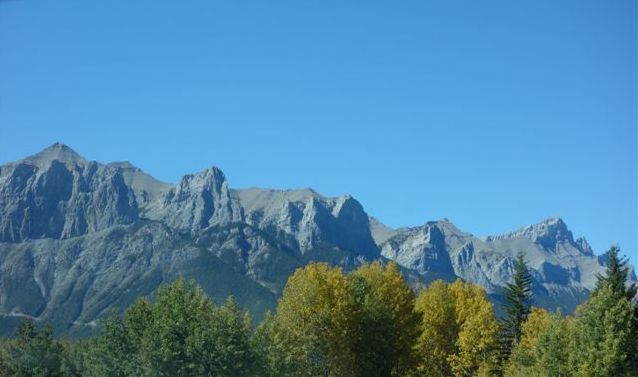 The mountains appeared as if by magic, seemingly out of nowhere, and quickly surrounded us on all sides. 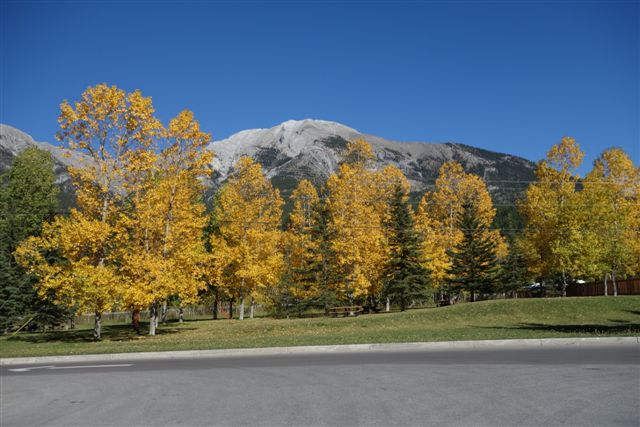 There was no snow at this stage but clearly we had timed our visit to the Rockies to perfection so far as Fall colours were concerned. We may not have caught them in Vermont and New Hampshire, but we certainly caught them here. 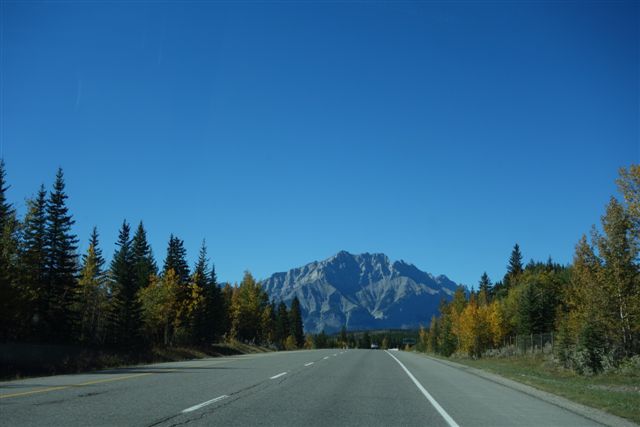 We were delighted about that as we had feared that we would miss them altogether. 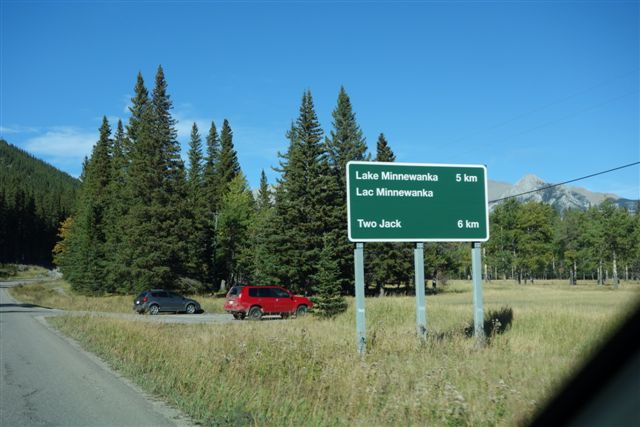 Our first destination was Lake Minnewanke. 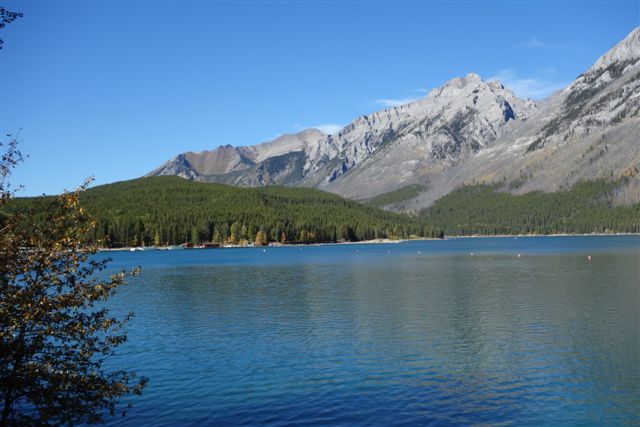 A summer resort village called Minnewanka Landing was established in. Eventually it grew to have four avenues, three streets, hotels, restaurants and cruise boats. In 1941 it was completely flooded by the Calgary Power Company under the War Measures Act and now it’s a ‘high altitude’ dive site. The town, which is one of three dive sites in Lake Minnewanka, is considered the best preserved example of a submerged historic village in Canada. 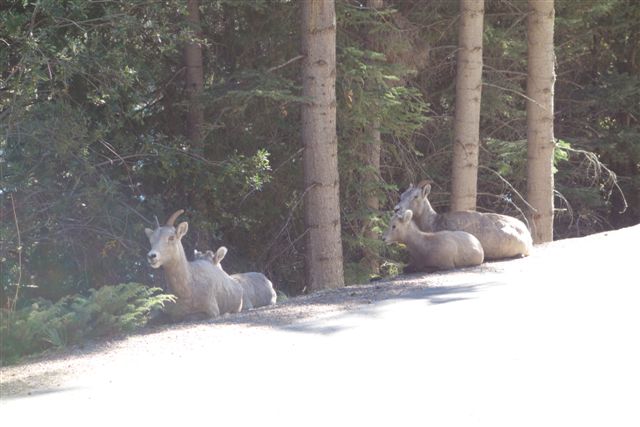 It was a beautiful drive around the lake and we were lucky enough to pass these bull deer, resting quietly by the roadside. Bull deer have white rumps and light brown fur and horns. The males have thick curved horns, the females have short, narrow horns. 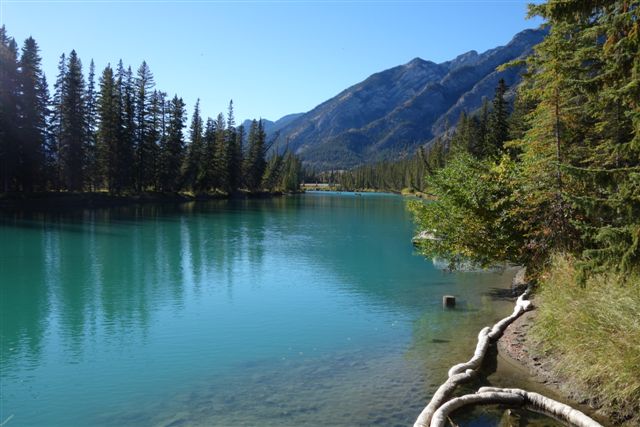 Our next destination was the Bow River whose source is the Bow Glacier and Bow Lake (which we hoped to see the following day).

We found our way to the banks of the Bow River in the middle of Banff. Banff itself was seething with people and lots of them were enjoying various water sports on the water. 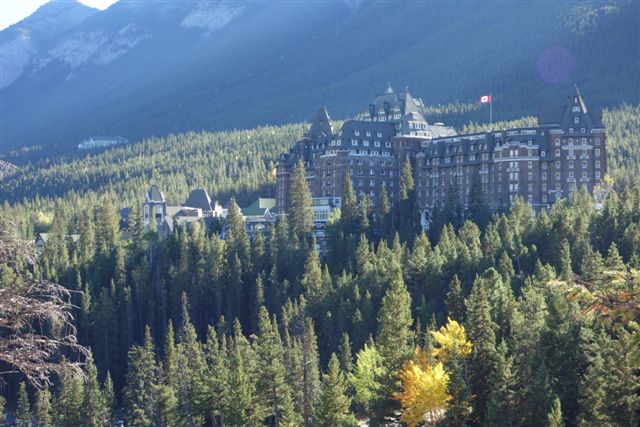 We passed the world famous Fairmont Banff Springs Hotel which stands out as something of a landmark that can be seen from miles around. 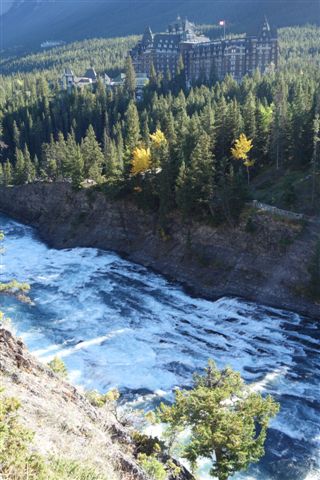 It makes an impressive sight from the top of the gondola too.

Known as Canada ‘s “Castle in the Rockies”, it has apparently been providing legendary hospitality for more than 125 years. 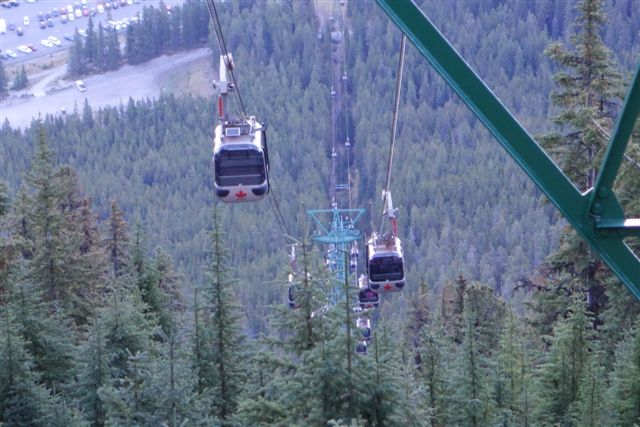 Suzi had generously given the three of us a special event trip to the Banff Gondola, the Glacial Sky Walk and the Glacial Adventure (which we would be taking up later). So we set off for the Gondola, Julie with some trepidation as she’s not all that happy about heights! The view on the journey to the top was spectacular.

In a closed gondola journey along the eastern slope of the sulphur mountain, the lift rises 698m from the 1,583 level to the 2,281m summit ridge in 8 minutes. At the top, an open-air observation deck gave us spectacular views of Banff and the surrounding mountains.

From the top of gondola we could see the Bow River. This river begins in the Rocky Mountains and winds through the Alberta foothills onto the prairies where it meets the Oldman River. The two then form the South Saskatchewan River. These waters ultimately flow through the Nelson River into Hudson’s Bay. In fact, the Bow River runs through Calgary and is considered a part of Calgary’s self-image.

First Nations peoples made varied use of the river for sustenance before settlers of European origin arrived, such as using its valleys in the buffalo hunt. The name ‘Bow’ refers to the reeds that grew along its banks and were used by the local First Nations peoples to make bows. The Peigan name for the river is ‘Makhabn’ meaning ‘river where bow reeds grow’. 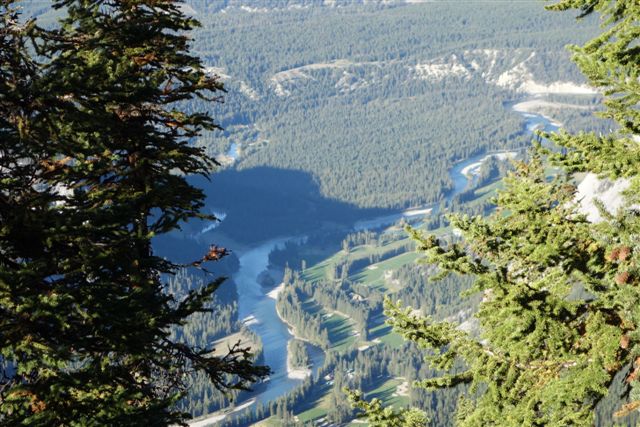 The river is an important source of water for irrigation and drinking water. Between 1910 and 1960, the Bow River and its tributaries were engineered to provide hydroelectric power, primarily for Calgary’s use. We had found the river beautiful at ground level but from nearly 3,000m it was spectacular. 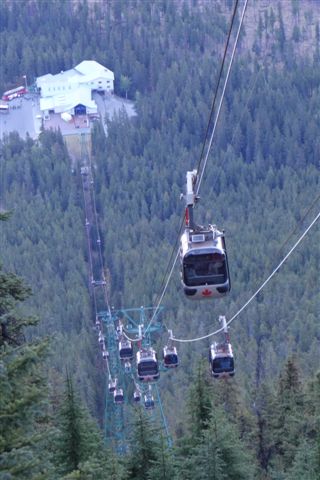 From the Summit we could see the gondola centre below as well as the many gondolas ascending and descending. 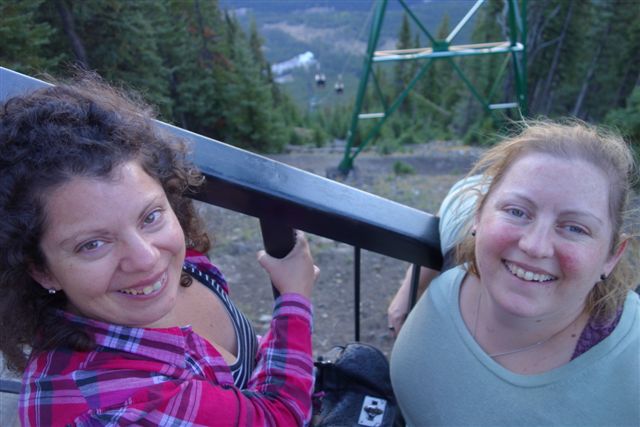 Julie managed to conquer her fear and pose with Suzi just below the summit terminal (although she was hanging on tightly)!

A placard at the summit explained how popular the gondola had become since it opened in 1959. 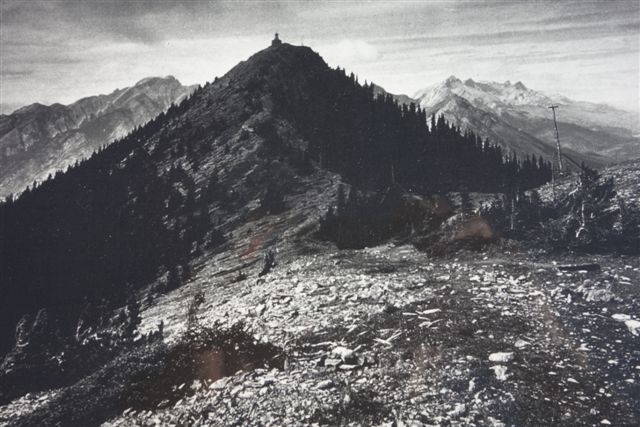 And there was also a picture that showed what the area looked like at that time. 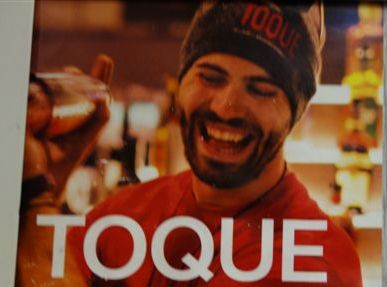 There was a picture on the wall that showed us the ultimate in high Canadian fashion – a hat worn year-round whether it’s cold or warm outside and stressing that yes, it gets warm in Canada! 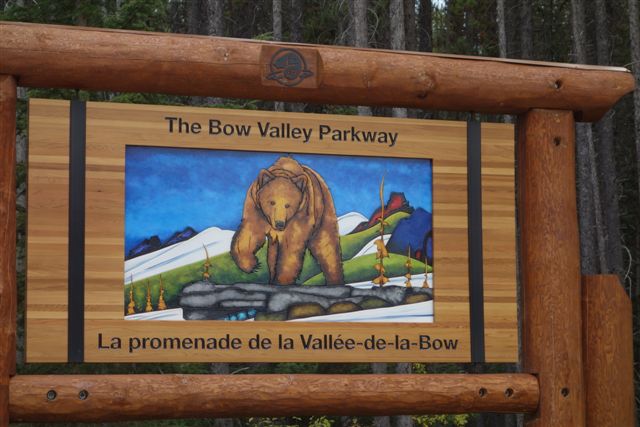 That evening we returned to Canmore along Highway 1A, the Bow Valley Parkway Highway. 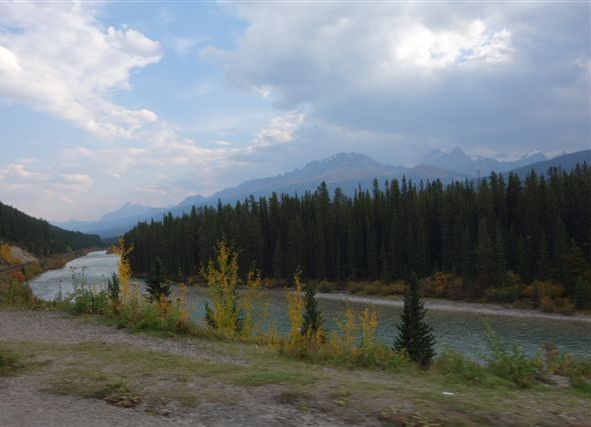 The Parkway was the original road DSC02508.jpg croppedbetween the town of Banff and the village of Lake Louise and runs along the Bow River, parallel to the Trans Canadian Highway.

The Parkway provides a slower, more scenic alternative to the Highway. We hoped to catch sight of Grizzly Bears, and other wildlife. It was a pretty route but unfortunately we weren’t successful in sighting any wildlife.