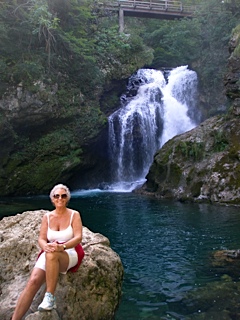 Since 2008 I've had a Wordpress website that's called 'The Intrepid Traveller'. It seemed like a good idea at the time. It was an opportunity to record all my travels around places in the world, friends I'd spent time with, things I'd seen, like this beautiful waterfall at Vintgar Gorge in Slovenia, history, and information I'd learned and photos I'd taken. I still think it was a good idea but lately, I've been very disappointed in the number of advertisements that have popped up all over the site, none of which appears to be relevant to what I'm writing about. Personally, I dislike unsolicited advertisements at the best of times and to see them 'interfering' with what I've written is offensive.

Meanwhile, my Lasting Impact site continues to unfold as I write monthly blogs and attract the odd  for one of my products or to get asked to speak at some event or other.

However, there are parts of this site that no longer seem relevant to what's happening in my life right now which is much more about voluntary activities than earning money.

So I've decided to reform this site by taking out the bits that refer to corporate work alone and move my travel blogs here. I think I'm going to call the page 'Traveller's Tales' but time will tell whether this is the final decision.

Yesterday, with this in mind, I transferred my first 'travel' blog. I don't know how I came upon this particular page because it turned out to be an indiscriminate choice in that it didn't start at the beginning but turned out, instead, to be about a few days spent in Budleigh Salterton, staying with very good friends and playing in a croquet tournament in August 2014.

Two thoughts came to me as I transferred the text, made obvious changes, and inserted the photos. One was the immense and therapeutic pleasure it gave me to reminisce - I kept finding myself smiling as I looked again at some of the photos. The other was the realization that the task was enormous and it would take me days and days and perhaps even months to complete it. However, this thought was soon dispelled as I brought back to mind the pleasure it had given to me to achieve the first of very many posts. After all, how likely am I  to dip into my own blog from time to time, just for the sake of it?